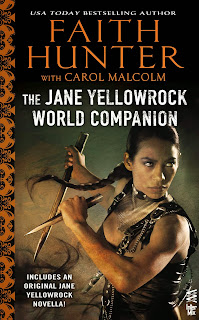 I’m a big fan of Faith Hunter’s Jane Yellowrock series so when the companion came into my hands I was excited to delve into it.
Companions can be excellent additions to a series, especially a long book series, bringing together all the information of the series in one place, being a handy one stop guide to questions, elaborating on all those little elements of the series that just cannot be included in the main books but are still hinted about – they can be excellent additions. Any author writing a series as long as this is inevitably going to have scenes and ideas and world building that they just can’t fit into the main series. Oh, they could – but inevitably it would be irrelevant to the plot or involve some massively ridiculous info-dumping that would look convoluted and would drag down the pacing of the story
This is the ideal place to fit in all those notes, rambles, world building development etc that couldn’t fit into the main story.
That’s a companion at its best
At its worst, a companion will merely rehash and repeat most of what has been said in the main series, occasionally interspaced with extras that have been on the author’s website. There will be nothing new, original, useful or interesting in it and it will feel like a bit of a money grab.
Unfortunately this companion falls heavily into the second category. A large swathe of the book is taken up by a brief recap of all the other books. As a reviewer this could be useful to me if I ever want to refer back to something in an earlier book, but really is pretty pointless. If you’ve read the series, you don’t need the recaps. This takes up a pretty huge part of the book.
Add on to this there’s a section which is basically a lot of quotes copied and pasted from the books as well.
We have some brief world building notes – but they’re just lists: like Jane’s list of weapons, a list of characters in the series (no extra information on them, just a list) or a brief history of Clan Pellissier – which could have been interesting if it were more than a list.
There’s a glossary at the beginning of the book, including several Cherokee terms, which isn’t bad – but it’s the kind of thing you normally see tucked into the back of a book in the series rather than part of the guide.
The end of the book has a pretty big introduction to Black Arts which is another large amount of repeated text.
In more original content we have 2 sections from Beast’s point of view – one a jokey analysis of the author herself and the other a kind of advice column where reads of the book write in with rather surprisingly serious issues to have Beast be Beast all over them.
Ok, they’re kind of fun and kind of funny – but they only have a tangential relationship to the book series. They’re fun reads though and I won’t say they’re worthless and shouldn’t be there – but because the book has so little substance elsewhere, I wasn’t a big fan.
We do have some excellent short stories, including one from Bruiser’s point of view on how compelling he finds Jane (which is nice in some ways, but is very heavy on the overdescription and the oh-how-hot-is-she-amazingly hot). It’s nice to see the shifting point of view though
The other is an excellent short story of Jane and the Younger brothers out in a mission against werewolves – a very action packed story set after everyone kinda-sorta knows what Jane is so she’s free to shapeshift. This contrasts nicely with Black Arts since everyone knows what she is there as well, but there’s less action, at least, less action with her around the others. It did involve female werewolves though and in this series we have a deeply dubious representation of female werewolves always being in heat, being dangerous, insane and driving their packs to frenzy
In the end, I was rather disappointed by the companion. It lacked substance, world building and growth. I felt it added very little to the actual series and a large amount of it is frankly fluff and filler – which feels like just throwing out a book to leech on the series’ success more than producing something of value. The Beast moments are light and fun though and it is redeemed from being an absolute hot mess with some pretty damn good short stories.