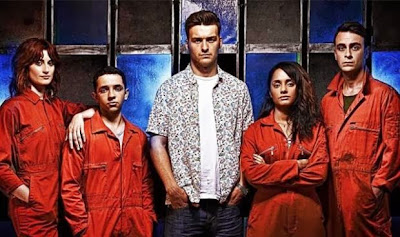 Another day on community service with the gang and Rudy is saying things. Nothing ever good comes from Rudy saying things. Jess tries to cut through the torrent of his sexist drivel but it’s only the appearance of Rudy’s dad (Geoff) that sends him scurrying into hiding (alas, not into silence). He’s hiding because he has told his parents a huge pack of highly implausible lies about what he’s doing. However his dad isn’t paying attention because he’s very busy making out with a woman who is definitely not Rudy’s mother.

Rudy 2 wants to tell their mother, but Rudy won’t have it and decides, instead, to go find the woman his father was with and hurl abuse at her.  To do this he ambushes Jess and makes her take him to see “his father’s harlot”. She takes him there and he promptly chickens out when he sees his father is also there – Jess thinks this is ideal because now he can talk to his dad without his mum knowing. He babbles more until Jess sensibly and maturely pushes him. Except he’s Rudy and he promptly falls apart in a mass of incomprehensible babble in the face of the woman who closes the door in his face – a sensible reaction to Rudy when he’s at his best, let alone when he’s in full babble.

But when the door closes they hear Geoff yelling at the woman – then the sound of breaking glass and her crying out in pain. They sneak round the back and watch through the blinds to see him holding her by the hair and threatening her while she sobs.

In the car, Rudy’s serious for once, his perception of his father is shattered

At the bar, Abbey is continuing to have her identity crisis, having no memory of who she is (Finn and Alex aren’t the most helpful of people)  when in the bathroom she smells something that she finds odd compelling – she tracks it down to a garment left on by the sinks and starts huffing on it. As you do.

Rudy 2 is continuing to go to his support group, but he snaps at Rudy when he asks where he’s going, since Rudy never normally cares about his life. He complains about this to his fellow group members along with how wrong it is for them to hide who they are, their powers (and, in Rudy 2’s case, the fact he exists) when they’ve done no wrong. As he leaves the group, one of the other members approaches him and asks him for help; it’s the man who’s “power” makes him think he’s in a computer game. He’s worried about losing himself again

At the community centre Jess tries to talk to Rudy, who is still very shaken. He decides to go to his parents’ house and punch his dad in the face. He goes – and nearly hits his mum. This quickly derails him, further put off balance by his parents asking him about the ridiculous fictional life he’s created. There follows Rudy babble, dodging around his lies and trying to passive aggressively get his message across to his dad all with a great big diversion into gay jokes as his parents assume his secret is that he’s gay.

Unable to confront his dad, Jess takes Rudy on another plan – to go to the woman’s house and help her get away from Geoff. But when they arrive they find his dad there, burning her clothes and attempting to clean up a large blood stain on the floor.

Time for another plan from Jess while Rudy freaks out – Rudy invites his dad out to the pub while she searches the house to see what happened and if, as they suspect, Geoff murdered her)

They put the plan in action, Rudy and Geoff at the pub and Jess enters the house and is interrupted by… Geoff. He’s in two places at once. She calls Rudy and he asks Geoff if he has a twin… not quite, there was a storm and… yes Geoff has Rudy’s power and Geoff 2 is all the awful parts of Geoff he kept hidden.

Rudy rushes to help Jess but she doesn’t need help, Geoff 2 just wants to know where the woman he was abusing, Martina, is though they know nothing. Geoff 2 tries to be friendly with Rudy but he’s not having it, not for one second, actually saying things worth hearing for once.

On to the community centre where Finn is taking a shower – he reaches for a towel and finds it being held by Greg, who then refuses to let the towel go despite Finn pulling on it to try and cover up. Why? Because we need more “gay man is predator” scenes, clearly – there’s just not enough homophobia in this episode.

Elsewhere, Abbey is still huffing on the scarf and trying to track down the woman it belongs to. Finn and Alex notice 3 guys hassling another kid, they intervene and Finn, despite his cowardice, scares them off by moving a shopping trolley with his telekinesis. The kid sees this and flies away – possibly the person from the future-telling-wooly-jumper. And only on Misfits would you ever use the phrase “future-telling-wooly-jumper”.

Martina comes to the community centre and Jess and Finn talk to her, explaining the whole split-in-two thing and trying to help her; though Geoff 2 took all her money. Jess has a plan - if all the money is in Geoff 2’s name then Geoff 1 can get at it – which Geoff 1 does and hands over the Martina, with an apology for what his other-half did. Martina leaves in a taxi

Abbey tracks down Laura, the woman with the scarf and after much awkwardness, talk of basement kidnap and rape with a strap-on, telling Laura about her memory loss and how Laura smells better than anyone in the world, they kind of hit it off. Or, at least, Laura is smiling while Abbey sniffs her.

At the community centre, Rudy 2 tries to get Rudy to take him with him to see their parents – who he has never met. Despite his begging, Rudy refuses, leaving Rudy 2 looking all forlorn that it even gets to Rudy – but not enough for him to change his mind.

Rudy goes to dinner – and notices the bandage on his dad’s hand. It’s Geoff 2, not Geoff. He confronts Geoff 2 in between sending his mother to the kitchen for various and increasingly bizarre sauces. Geoff and Geoff 2 had agreed to leave each other alone – by reclaiming Martina’s money, Geoff broke the deal – and he threatens Rudy’s mum, especially if Rudy tells her. In one of the many times he sends his mum to the kitchen, Geoff 2 knocks Rudy unconscious and hides him under the table, taking her upstairs.

Jess arrives at the house, invited by Rudy to pretend to be his girlfriend so his parents won’t think he’s gay, but no-one answers. As she leaves she hears banging from the car and uses her x-ray vision to see Geoff bound in the boot. Inside, Rudy wakes up and hurries up to attack Geoff 2 – his mum is confused but when Geoff 2 throws him aside then threatens to beat both of them she’s far more shocked – until Jess appears behind Geoff 2 and smacks him on the back of the head. Lots of explaining to Rudy’s mum follows

Geoff 2 wakes up to find Rudy’s mother standing over him. She tells him Geoff has confessed everything – everything he did when they were one man, all the affairs and faults. Geoff 2 now knows no secrets to use against them – and she threatens to kill him if he ever comes back. They return to the house where Jess pretends to be Rudy’s girlfriend – with a strong undertone of this may not entirely be a defence.

Back at the community centre, Rudy gives Jess a present while happy music plays

At the support group, they’re joined by Sam, the guy who can fly.

Jess is getting into the habit of snapping at Rudy sometimes when he says his usual tirade of sexual or sexist crap – and even made him back down occasionally (this episode had the “I disgust myself when I’m nervous” apology), but the torrent is too much for anyone to actually respond to even a tenth of what he spouts. It’d

One thing Misfits does a lot is be very stark with aspects of life that we do tend to keep off the screens – it shows all the stuff we’re usually eager to hide; some of it is crass toilet humour, but some of it could be quite challenging in the sense of “this happens we shouldn’t be this disgusted sense.” But a lot of this is coalescing around Abbey – who has been firmly cast as the “fallen woman” we’re supposed to be disgusted by – as was blatantly made clear with the last episode of last season. So when Abbey goes into the bathroom to change her tampon we can’t really say “this is a normal proves a gazillion women do every day so why not include it” because it feels a lot more like “isn’t she nasty, talking about such things around men!”

Misfits has few, if any limits, but when showing these stark scenes of domestic abuse I will acknowledge that they never ever made a joke out of it, which they have everything else. This, at least, they kept as severe and awful as it was.