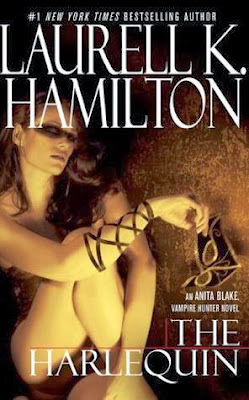 The Harlequin, the deadly and secret Wild Hunt of the Council, the ultimate police force and nightmare of the vampire world, has arrived in St. Louis. Ostensibly there to examine Malcolm after his refusal to Blood Oath his followers, they are casting their eyes on Jean-Claude

And they are not playing by the rules

The biggest, scariest enforces of vampire kind! Created to strike fear in even the most powerful Masters of the City! Scary! Powerful! A force that should make even Anita quake in her boots.

Because they’re not there. The book is called The Harlequin, everyone refers to them as the scariest things ever ever ever but… they don’t actually do a whole lot. The main thing they do do is mess with people’s emotions causing minor overreactions which are dealt with the minute everyone realises they’re having an overreaction

Do you know how tense and dramatic a scene if where people talk for several pages about various angsty issues and then spend some more pages deciding whether or not their issues were legitimate or not is? If you guessed “not even slightly” then you’d be right. Epic shows downs involving everyone sitting in a circle and wringing their hands rate somewhere between “watching paint dry” and “going through Aunt Mildred’s holiday photos” in terms of excitement.

Of course, this is also an Anita Blake book. So when the enemy attacks by making the characters extra dramatic, extra whiney, extra angsty or extra moody – HOW ARE YOU SUPPOSED TO TELL?! This is their ground state of being! If it weren’t for Anita occasionally saying “I’m way too afraid” or “he’s acting too angry” I’d completely miss it. And did, repeatedly. It’s impossible to portray these characters as more emotionally uncontrolled than they already are.

Requiem is being pouty and moody… and this is news? Byron being catty and poking at people – yeah, that’s kind of his only defining character trait (because it’s a stereotype). Richard being surly, uncooperative and angry? Oh, must be Tuesday.

In fact, Richard losing his ever loving mind because of the Harlequin messing with him is the major “attack” of the Harlequin. But Richard perpetually loses his ever loving mind! He attacked Jean-Claude? Yeah, not the first time. He wants Anita all to himself? This is hardly news. He hates being a werewolf? Yup, we knew that as well. Exactly what did the Harlequin do to Richard that was discernibly different from how he has behaved from the last several books?

Or even in this book. Anita, using her woo-woo, slams the messing Harlequin across the room and they stop meddling with their emotions. And later they head to a huge show down – I’m talking a massive dramatic show-down with Jean-Claude, Anita & co on a stage opposite the big bad Harlequin also on the stage, watched by a huge audience. Faced by this Richard decides to… lose his ever loving mind.

I kid you not, for pages he sits there and wails about the Ardeur and how he can’t be part of it and waaaah his issues. The big bad vampires are RIGHT THERE watching him. Anita, Richard and Jean-Claude have a big argument while the bad guys, I don’t know, check their watches and tap their feet and wait to be noticed again, I guess. And this isn’t the first time Richard has lost his ever loving mind while the bad guys are in mid-attack – it happened when Musette visited in Cerulean Sins as well.

Richard attacking Jean-Claude isn’t proof of the evil-bad-nasty Harlequin. It’s par the course with his characters.

This was not a good idea.

So let’s make it worse by throwing in lots of pointless side issues involving MORE ANGST.

Requiem is pissed Anita doesn’t love him. Waaah. The guards are upset because they’re bodyguards and don’t think Anita is confiding enough in them or consulting them when deciding how to arrange her love-life and magic. This is resolved by… HA! Resolved? Since when do plot lines ever get resolved in this series! It just kind of fizzles out and is never ever seen again, ever. No, really, I’m up to book 22.5 and all that resentment has just magically been whisked away. Shame it couldn’t have happened before the PAGES of unnecessary verbiage.

Oh yes and Raphael is worried because Anita and Jean-Claude may support the werehyenas over the were-rats (especially not the wereyenas are hiring “real” muscle rather than all the pretty gay men they were before. And yes, that’s nauseatingly homophobic). Never mind that Anita has already risked her life to save Raphael from the Council, never mind that she’s been a loyal friend since, well book 1. Time for them to sit in a circle and talk about it for pages and pages and pages and pages before we have the inevitable sex scene. Oh Raphael, you’ve been checked off the list, the Vagina that Ate St Louis has found you.

Of course, you’d think something as epic as two of the most powerful animal groups in the city being at odds with each other would leads to a meta-plot that would last for books of consequences and diplomacy and… nope, all resolved now. The issue never raises itself again. One would almost go so far as to say it was utterly pointless filler in the first place.

Dolph drops in to remind us all how much he hates Anita. Because it’s not an Anita Blake book if we don’t get some haters in there.

The son of the Master Vampire of Cape Cod is also hanging around. Literally, that’s all he does, just kind of lurk in the background like wall paper. Which requires words, more annoying, so very unnecessary words

Anita spends multiple scenes worrying about the beasts inside of her and whether she’s becoming a shapeshifter – this is pretty much resolved the same way every time – the same way it was in the last book and generally adds to the huge steaming pile of unnecessary crap wedged into the book.

The Mother of all Darkness zooms in and out now and then just to wave at us and remind us she’s scary.

Edward arrives! (YAY!) so we can spend pages discussion how he can’t risk himself because he’s a family man now and woe-angst-woe. (Oh gods no – Et Tu Edward?) He brings with him people guaranteed to cause YET MORE ANGST AND WOE. Seriously, his entire presence there – and his backup – was just so we could have several more pages of pointless dialogue which will NEVER BE RELEVENT AGAIN. Are either of his back ups ever mentioned again? Not by book 22 they’re not!

The swan-king drops in for sex (of course, that’s another one off the list). And there’s the werelions – let’s pick apart this hot mess. I get that the werelions, being a weak pride, are not pulling their weight. I get that it’s from mismanagement. I get why everyone in the city is thoroughly pissed that they’re taking and giving nothing back. By all means, address that, demand they find a way to step up and do their share – but telling the man to have sex with Anita or they’ll kill him (which is basically what happened) is not only crossing a line, it’s sprinting over the line so fast you didn’t even see it flash by. Behold the sexual agency of these books! Attempted rape all round

I would have been far happier with a mature conversation of why Anita is unwilling to go there, a reasonable discussion of Nathaniel seeking other partners (especially since this is an open relationship) and a general butting out of everyone who isn’t in the bed – and a whole lot less “waaah Anita is a bad person for not engaging in sex she doesn’t want.”

Do you know what’s sad about this book? What’s sad is that the Harlequin concept is awesome. Having this roving band of sinister, anonymous powerful vampires moving in to police even the mightiest masters of the city is excellent. Them dressing up as characters from the Comedia dell’arte? Perfectly sinister! If this had been introduced in the earlier days of Anita Blake this could have been an awesome story

Instead we got pages of angst, problems which, of course, are cured by sex and lots of threads of tiny side plots which could be interesting – could be excellent – but are never developed and quickly fade into obscurity, maybe leaving a random character behind to add to the clutter.