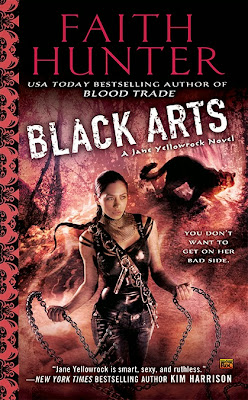 Jane has three jobs in this book – Katie, Leo’s unpredictable second-in-command vampire, wants her to find where two of her working girls have disappeared to; previous good friends of Jane. Leo himself is having a great big shindig and wants Jane to handle the security just in case they’re invaded by werewolves again – especially since the guest is a new addition to Leo’s vampires and he doesn’t trust the man one iota. As ever, Leo is engaged in a long game of lots of subtle plotting and has firmly cast Jane in the role of doing terrible things he can then deny he had any part in.

And Jane’s best friend, Molly, has disappeared. Her husband Evan arrives in town, distraught, knowing only that Molly was heading to see Jane when she disappeared – and that she doesn’t appear to want to be found.

Throw in some deadly vampire magic, some lethal magic artefacts, a whole lot of revelations and a side order of closure and Jane has a very full plate to handle.

We spent a lot of interesting time in Jane’s head this book. Firstly, this is the book where everyone knows she’s a Skinwalker – everyone she meets is told. Jane’s reaction to this is excellent and complex, with both a feeling of exposure after having kept her secret so long but also a vast feeling of relief. She can now talk about these things with people, she can talk about her history, she can be open about her abilities and it’s amazingly freeing. She’s happy to use her sense of smell or her strength (and make it clear to people “Not human, deal with it”, if it shocks them). This brought a lot of her history out in the open for everyone to know, her nature and her abilities which sets us off in a whole new direction and tone for the books.

Jane’s ongoing struggle to reconcile her job and the things she has to do with her strict moral upbringing and her own sense that she is not a good person. She also has the battle between her Christian faith and her returning memory bringing more and more of her Cherokee beliefs to the fore. It’s a wonderful crisis of identity and morality that has been at the margins of Jane’s character for a long time and it really comes to a head in this book.

There was a bad moment – Rick. I hate Rick. No, that’s not fair, I don’t hate Rick, Rick is not a bad character. What is bad is what happens to Jane whenever Rick is around – she becomes a lovestruck fool, her sense of professionalism goes out the window and her emotions get in the driving seat. Some of these are natural reactions, but Jane takes it to the next level – including having to run out of a function she is chief of security for, while the big bad is right there, so she can go be weepy in a corner. Sorry everyone, play nice for half an hour, our chief warrior is bawling her eyes out.

I think in some ways this book was a drawing a number of storylines to a close and setting a new paradigm – Rick and Jane may not be over but the coffin is being prepared even if it isn’t nailed shut yet. Jane’s reconciliation with Molly is now sealed, ending that conflict. Jane is open about her nature and history to everyone and has come to terms with her actions, her morality and her identity. Even Jane and Leo – while I think Jane has still been ridiculously forgiven, is now heading down the path of reconciliation. We also have closure on Jane and Beast, on what Jane did to Beast and a new peace and acceptance between them. I think a line has been drawn under these issues, they’re not over and they may be revisited, but there’s a definite sense that they’ve been resolved or are on their way to being. I really like this because I feel a lot of these issues can end up dragging on for book after book and you end up on a later book constantly bogged down by ongoing issues that never get resolved – especially since many if not all of these issues come with heavy loads of guilt.

Now to the story. Honestly, while I think the three interwoven storylines were complex and exciting and interesting and well thought out to create a really good mystery, I had great difficulty following them. There were several characters who I just lost, several plot lines that bemused me. Frankly, I’m still not entirely sure how we reached the ending, who was what bad guy and while I knew what the bad guy was doing, I wasn’t sure how he was doing it. I really liked that we drew on a lot of past storylines without lots of excess recapping – which I loved – but I have to admit that perhaps, just perhaps, a little bit of recapping would have made the story easier to follow

And while there was a sense of Jane being harried because she had so much to do and so many conflicting priorities, at the same time I often felt like she was neglecting some of the cases. Of course, this was largely because there was often a case where she couldn’t do anything until Alex came through with more data or someone did – but Molly in particular often felt less of the priority that I hoped she would be. Objectively, there’s nothing more Jane could have done, but while reading the book it felt neglected.

Minority-wise, the Jane Yellowrock series always does well in terms of number of POC. Jane herself is Cherokee – and not just as a descriptor (often used to justify character woo-woo without informing the character at all), but with culture and history that is being unfolded every book and is an integral part of her identity and one of the bedrocks of her character. She has her Cherokee mentors who she deeply respects and guide her. Her business partners – Eli and Alex – are both POC and this book further emphasised not just how competent they both are, but also how much she values them as well, that they are most certainly part of her family. Derek Lee and his squad are all Black, and Derek isn’t just the silent warrior in the background. The representatives of the African shapeshifters, the main force in the were world are also Black, as we’ve seen before. The negative side to this is Ricky being pulled from Jane by a Black, female wereleopard who is “in heat”, which carries a heavy load of “Jezebel” and the over-sexed Black women trope

There are no GBLT people, again, though we refer to the cook who, if you have been playing close attention to the whole books, is gay. And, really, it’s not like he’s a character so much as the guy who cooks and does laundry off screen

There are some hooks in this book for the next in the series – a strange attack on Jane and Bruiser, Bruiser himself as independent, the European Vampires arriving… but I didn’t much like how they were done. The story was so packed and a little bit confused that they felt like more distractions in a story that needed more focus.

This all leaves me with a book I love, but with a number of relatively minor elements to it that I found irritating, awkward or clumsy. It eases itself towards a 4 fang book, an awesome read, but takes a step back because of those elements just stopping it reaching that 4.