Blade to the Keep (Rowan Summerwaite #2) By Lauren Dane 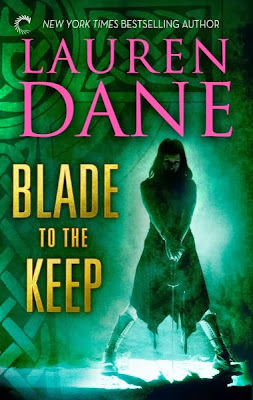 Rowan is the representative of Hunter Corp. And the daughter of the First Vampire. It gives her a unique position in the negotiations and makes her ideally suited to ensuring this treaty passes. She has worked extremely hard to make it happen and now is the finally stages – and she’s not letting prima donnas, bloodthirsty vampires or war mongering hunters screw it up. By blessed sword, goddess strength, investigative skills or political wrangling, she will ratify this treaty.

There are a lot of books in the genre, including the book that preceded this one, where we have excellent, powerful female characters who wield weapons, magical power and are combat monsters who can take on all comers. They are lethally dangerous warriors to be feared by even the most deadly creatures in their world – and that’s not a bad thing (so long as they’re not JUST a lethal combatant).

But being a combat monster usually means that is all the character is. Her challenges will be a) sorting out her love life (because combat monster characters are usually socially inept as well) and b) fighting bigger and tougher monsters who are even more lethal!

Then comes Blade to the Keep with this lethal combat monster protagonist who spends the whole book using her brains, intelligence and experience to navigate the shoals of devious political machinations, investigate the shenanigans of various people trying to sabotage the negotiations and generally be clever and cunning and call out a lot of fools for being fools.

And it is EPIC. No, really, a book where she slaps people down for messing with the agenda of meetings and is bustling from meeting to meeting to have discussions about amending a treaty is epic. It’s awesome, it’s amazing and the best parts of this book don’t require her to draw her sword. Yet it still feels exciting, thrilling and action packed. That takes some effort.

Of course, Rowan is the main reason behind this. She’s wonderfully confident – she knows she’s the most qualified for the job. Not because she’s special or shiny or the Chosen One (though, as the vessel of a goddess, she kind of is all those things, but that’s beside the point) – but because of experience. She is the ideal person to be the Hunter’s liaison to the vampires because she was raised by them, by the First himself. She knows vampire etiquette (which is interestingly different from human etiquette as we see wonderfully displayed when Rowan has to slap down her competitor for repeated faux pas) and how a large entourage means “status symbol” to humans and “annoying number of people to house” to vampires. She knows what vampires value, she knows what they’ll not accept, she knows what they will tolerate – she knows what’s negotiable and what’s a deal breaker. She has the knowledge and experience to get this done – so she is in charge, she should be in charge and she knows that.

There’s also the very nature of the debate. The treaty is being challenged in total by a faction of the Hunters who want to scrap it and wipe out the vampires. These Hunters make this decree while sitting behind their desks while expecting hunters like Rowan to go out and fight this war. Those Hunters who are actually active in the field are fully aware of how ridiculous this plan is – and who will be dying for it. It’s a wonderful parallel to who makes the decision to go to war and who actually suffers for that decision that we face in the real world – and how easy it is to be an armchair warrior yelling “kill them all” and talking about “collateral damage” when you’re not going to be the one fighting and dying.

This all combines to a wonderful strength and confidence in Rowan. She knows her skills. She knows her experience. She knows her worth – there’s no doubt to her, no constant self-recrimination, and a solid certainty in the things she’s certain of and in her own abilities which is wonderful to see. She KNOWS when she is better suited to the role – and is not shy about telling people that. She’s also put a lot of work into making this work – months of effort arranging schedules and agendas and meetings – and she demands that work be acknowledged. She isn’t going to let people derail the process now because they have whims when they couldn’t be bothered to involve themselves in the long, gruelling preparation work. They have an objection? They can post that back to 2 months ago when it was relevant – now they will suck it up and deal

Ok, let me grudgingly insert some potential negative here. Yes she dishes out some epic slap down… but the people she slaps down? Kinda set her up. Her opponents are fairly excessive in their incompetence – not to the point of utter unrealism or anything like that – it’s not story breaking. But while I love and adore these scenes and re-read several of them just to bask in the glory of some of the best, epic slapdowns I have ever read – I do have to insert that little caveat. I still loved them though.

It is possible that Rowan will come off as arrogant in this book because she is so confident, she shoots down her opponents so brutally and because she won’t bend and makes her skills and experience abundantly clear (and her opponent’s lack equally exposed). But she doesn’t feel that way. She never shouts her skills in passing, she doesn’t wave a flag of her won awesomeness all the time. But she’s a busy woman and she has zero tolerance for foolishness and no time for it – she’s not going to clear her schedule – planned weeks in advance – for a random, pointless meeting to stroke their ego and she’s not going to tell them why in a nice fashion. They don’t deserve it. More, they should know better, they’re professional people with a job to do that and she doesn’t have time for their shenanigans.

“Now, I have things to do. You’ve registered your opinion. No-one cares. Run along.”

I’ve praised her social skills, but there are definitely moments of battle in the book as well – some really awesome ones including that rarest of moments – a time when the protagonist is just SO MUCH BETTER than her opponent. It seems to be a trope of the strong female warrior that she may be skillfull and deadly but she only ever fights monsters that are more deadly than her – and we definitely work our way to that, nor is Rowan the most dangerous creature there – but sometimes it’s good to see an awesome protagonist rather excellently laying out a petty enemy that should have known better than to take on her amazingness.

I also quite like the romance because it is so drama free. Rowan likes Clive. Probably loves him. They enjoy sex without angst or guilt, enjoy one another’s company without reserve, snark back and forth most excellently and don’t spend any time agonising about any of it. There’s no ANGST there. There’s no “oh he’s a vampire and I’m a human! Woe!” Or “he’s going to live forever and I’m not! Woe!” or “I am so terribly fugly how could he want me, woe!” or ANY of the staples I know and loathe. There is an ex-girlfriend and she is evil – yes that’s a trope, but her being evil isn’t linked to her being an ex. She’s evil and she happens to be an ex. When she tries to pull the old “make her jealous” routine, Rowan responds with:

“Is this the part where we pull each other’s hair or whatever? Sorry, I’ve never fought over a man with a woman he’d so obviously dumped decades before, so you’ll have to run through the process.”

Quite. And that’s it. No jealousy. No fraught comparing herself to the other woman. No lamentations and grief.

Rowan uses the word “bitch” a lot – both as an insult to other women and to self-reference (to basically mean “woman who is actually going to get shit done.”) At times it feels like a broken record

We do have a number of women though – and there are a lot of women on the side of evil, it being a primarily woman-lead faction – and on the side of incompetence. But, to balance that we also have incompetent, useless men and men on evil’s side – but subordinate. Rowan is also backed by a number of skilled and awesome women: Celesse (who has the distinction of being someone Rowan doesn’t like very much but still respects), Susan, Paola and Dina. They’re all strong, all different and all great fun.

We have, to my memory, only one POC for sure (the Vampire leader of Russia, Asia and Eastern Europe – which seems a ridiculously huge territory compared to the others). And one possible (Paola, the vampire leader of South America), but only Paola plays a huge role. There are no GBLT characters.

The relationship between Rowan and her father is… complex. On the one side she acknowledges and constantly refers to his abuse, his violent abuse, and how everyone is scared of him. On the other, she deeply respects him and regards him with a lot of affection and understands he is the only thing that really holds the Vampire Nation together. She treats him like… a tiger, I think. An incredibly powerful, beautiful, amazing being that, nevertheless, is terrifyingly dangerous and needs to be handled with the utmost caution at all times.

I have one concern. The first book was released in 2011 and it took more than 2 years to produce book 2 – waiting 2 more years for book 3 saddens me.