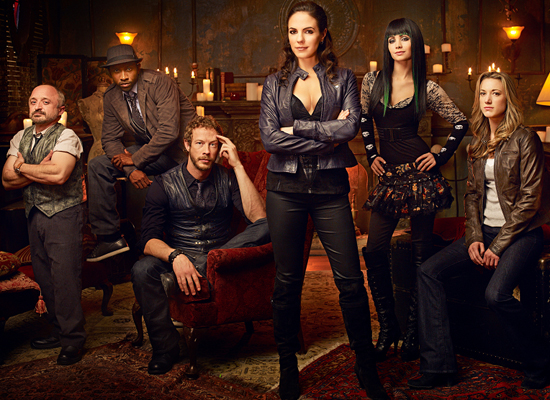 Bo is still in her meeting with the Unamenz. Bo declares that she is not dark fae and is in fact still unaligned.  It seems that a gargoyle read Bo's blood and made a determination based on that. Bo insists that she not dark but it seems that there is some connection involving Vex.  Bo goes to leave and she is told that Lauren and Kenzi are enemies of the fae and will suffer a harsh death.  Bo uses her succubus power to attack the Unamenz, but it boomerangs and attacks her.  Bo is informed that she must pay fealty to the leader of the Dark Fae at once or die.

Kenzi and Bo are waiting and Bo talks about finding the wanderer  and Vex because she is now supposedly dark fae.  They then discuss Dyson, who is M.I.A. because he is looking for Lauren. Bo declares that Lauren has to be found.  Kenzi asks if she is dark as well because Bo is dark and Bo declares that they will not be dark for long.  Bo makes her way into The Morrigan's office declaring that she is dark and is shocked to see that The Morrigan is still alive. The Morrigan snarks that Bo is dark and Bo says that she is having it annulled as soon as The Morrigan hands over Vex. The Morrigan invites Bo to a party and Bo declines.  As Bo moves to leave the office, The Morrigan informs Bo that if she was tricked into joining the dark fae, she can get out of it if she can show proof before the first fool moon. Bo realises that this is tonight.

Trick is on the phone trying to dig up information about The Wanderer.  When he gets off the phone he looks at some weird fae seed in a box and is momentarily mesmerized, before locking the seed away. A men makes an appearance and Trick is informed that he has been summoned by the Unamenz.

Trick makes an appearance at the Unamenz chamber for his inquisition.

Bo and Lauren start to make out when they are left alone.

The Unamenz it seems were created to over turn the blood laws of the blood king.  The Unamenz want the blood king to swallow the seed Trick was looking at earlier and join them so that they can establish justice unchallenged.  It seems that though Trick is the blood king it is treated as a separate identity.

Kenzi and Tamzin are at the buffet and they find Bruce serving as the table.  Kenzi orders him to stand up.

Laruen and Bo continue to kiss and Bo declares that she wanted to find Lauren.  Bo then explains that Vex worked with the Wanderer to make her dark.  Lauren says that she is hiding in terror from the Unamenz.  They kiss again and are interrupted by The Morrigan who says that they should scissor already.  The Morrigan promises the means to run down Vex, if Bo promises to bring him to her. The Morrigan then introduces Bo to the scavenger and then leaves Bo and Laure to have their quickie.


The Scavenger tells Bo that with his accounts frozen that Vex has been working as a hooker. Really Lost Girl? At any rate the Scavanger goes around a corner where she stabs a body several times with a supposed magic knife.  This magic knife is the only way to cut away the poison which the Unamenz placed on Vex, binding him to the territory.  It seems that Vex believes that the Scavenger is stealing the special knife for him but it's a sting operation.  Lauren and Bo ask where Vex was last seen and it appears Vex was hiding near where Dyson is living.


Back at the party, Bruce explains that as punishment for helping Kenzi, he was made a slave. It seems that Bruce sent Kenzi fake postcards so she wouldn't worry about him.  Bruce asks Kenzi to find another fae to become his master.  It seems that the fae who takes over is completely responsible for him until his punishment is over.  Tamsin takes the mike and declares that she is going to be Bruce's new master.  The Morrigan says that the current holder has the right to defend their property. Kai makes her appearance and Tamsin and Kenzi realise they have bitten off more than they can chew.

The Scavenger is walking back and forth in an alley hoping to capture Vex and Lauren fills a syringe with a hallucinogenic for Vex. Bo brings up that she needs to talk to Lauren and asks who Karen is. Before Lauren can answer, a woman clearly under Vex's control appears and takes the magical knife from The Scavenger. Bo chases after the woman with Lauren's syringe. When Bo finds Vex, she tells him that he is going to undo her alliance to the dark and Vex declares that The Wanderer is just a myth. Vex says that he is leaving and the woman under Vex's control attacks Bo, allowing him to sneak up on Bo from behind and knock her unconscious.

When Bo wakes, she finds herself laid out on a bed, still a little bit high.  In the other room, Vex is working on a potion.  Vex tells Bo that she is his leverage.  When Bo tries to use her power on Vex, she discovers that it doesn't work.  Bo babbles about being back together with Lauren and complains about being tricked into being turned dark.

Kenzi tries to reassure Tamsin and reminds her that she is a Valkyrie. The Morrigan announces that this is a battle to death. Tamsin declares that she wants to have a dance off.

Vex is mixing an anesthetic so that he can amputate his hand and free himself from the Unamenz. Bo babbles more about how she and Lauren are back together. In frustration, Vex puts a gag in her mouth. Vex says that he is the last Mesmir and that his kind were hunted and slaughtered throughout the ages by all of the fae because of their power.  The Mesmirs were hunted by having their hands cut off making them unable to feed.  This is what happened to Vex's entire family.

Tamsin begins the dance battle and Kenzi coaches her with movies including a twerk.  Kai takes the floor and she has more moves than Tamsin. Kai continues to dance and Tamsin uses her power to kill her.

Vex downs the anesthetic and screams in pain as Bo watches.  Vex then gets ready to shop off his hand. Bo pushes out her gag and says that Vex chose this location because he wanted her and Kenzi to find him. Vex starts to scream because it seems that anesthetic is making it worse.  Bo manages to get out of bed but not soon enough to stop Vex from cutting off his own hand.

Bo catches up with Vex by a car and he begs not to be taken back to The Morrigan. Bo asks why she should help him, when he won't help her end her allegiance with the dark.  Vex asks why Bo didn't ask the Morrigan's archivist and Bo realises that The Morrigan played her.

Trick gives his written story to the Unamenz.  Trick declares that the rules he created were cruel. It seems that The Unamenz want Trick to be the acting Ash.

Bo shows Lauren Vex's hand and suggests that they head home.  Lauren says that when the Unamenz started killing humans, it was the Dark who sought her out and offered her protection.  Bo says that she would have come if she could.  Lauren says that she is with the dark on her own terms and that there is no binding agreements. Lauren declares that she is free with the dark and Bo argues that she will claim her if she has to. Lauren is not interested in being owned and adds that since she will always be a prisoner, she wants to choose her own cage.  Bo tells Lauren that when she is ready to come back to her real family, all she has to do is say the word before leaving.

Kenzi and Bruce are talking and she suggests that he take off and find himself as Tamsin listens in.

Bo has taken the hand to Trick and Trick tells her that he is now The acting Ash. Trick comforts Bo saying that they will muddle through. Trick then adds that if they look at the King's book of records they can find out  who her sponsor is.

We are then shown that the seed Trick put away has been stolen.

The Unamenz are presented with Bo's dark fae declaration. They grab the King's book and look up Rainer and say, "it can never be. Never again."

Well it took five episodes to add a little clarity to the plot.  Now that we sort of have a direction I wish I could say that I am more interested in what is happening on Lost Girl this season.  This episode still relied on silly devices and inane humor. A dance off to the death? Also can we please stop the White girl twerking because even though Miley did it, it's still appropriation.

I will however say that I am glad to see that Lauren has gone dark.  It is telling that Bo is so blind to what the dark fae are.  Even Kenzi realised that there is very little difference between light and dark fae. Both sides feed on humans to survive after all.  Even when Lauren pointed out the harm of being a light fae servant, Bo refused to listen. Bo couldn't even understand why Lauren didn't want to be claimed. Though Bo has continually declared herself unaligned let's be honest, for the entire length of this show, she has fought on the side of the Light fae. This show really needs to give us some distinction between these two groups.

The reunion with Lauren was brief and I suspect that Bo will now spend her time bouncing between Lauren and Dyson.  I am not looking forward to this because I find the love triangle boring.  I don't understand why these two are interested in Bo in the first place.