Under Wraps (Under World Detective Agency Chronicles #1) by Hannah Jayne 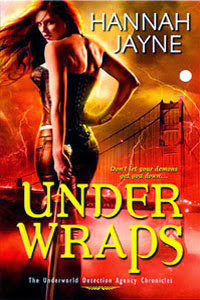 But people have been dying in the city, brutally murdered, in ways that seem supernatural. The police – with detective Hayes as investigating officer – want some expert help on the supernatural denizens of the city. Sophie, as an (almost) human member of the UDA seems the ideal choice

Also, it doesn’t hurt that she finds Hayes rather… compelling

I always try to start a review with some positives, so let’s start there…

This concludes the positives.

No, seriously, I have not one good thing to say about this book. Ok, let me dredge something up – it has POTENTIAL.

The potential lies in the world. The idea of an underworld full of every creature of legend coming to Earth and having to fill in forms in triplicate for the UDA is an appealing one. There’s a huge number of creatures mentioned and they have hints of greater characters – like the fairies and pixies with their very bad tempers, for example, and the feud between the trolls and the dwarfs. There’s a lot of potential for growth and depth there to create a really fascinating and likely funny world.

It wasn’t realised here. For the most part all of the creatures were names, descriptions. They could have been wereavocados for all the difference it made. Now, fitting in depth for all of them so early in the series is hard and maybe impossible, so I don’t hold it against the book – yet. So the world gets a grudging tick.

There. A positive! Now to the negative

Which has to start with Sophie, the protagonist. Oh dear gods, this woman is quite literally the worst protagonist I have ever had the displeasure to read.

Firstly, this woman needs to give Anne Summers a call, invest in half of their catalogue and take care of business – because her overriding, unworkable obsession with good looking men is bordering on needing an intervention or treatment. The number of pages she spends drooling over her boss or Hayes are completely staggering. If you remove her endless desire to hump their legs from the book you’d be left with a pamphlet. It doesn’t matter what she’s doing, murdered bodies around, important work, saving lives – it doesn’t matter, her hawtness obsession never pauses. I actually have a note in the book saying “please gods stop” before the end of chapter 1. That is how quickly my patience ran out.

The whole reason she volunteers herself to help Hayes is because he’s hot. That’s how she inserts herself into a murder case. At one point she holds her breath when hunting for clues that Hayes is single and he gives her a concerned look because she has been rendered breathless by his hawtness for so long.

Secondly, this woman is pathetically weak. She works every day in the UDA, surrounded by every kind of creature imaginable yet get her in a club on an undercover mission and she has a minor panic attack because of all the monsters around her and has to be saved by Hayes. She not only loses her lunch at crime scenes, but she can’t even think about the victims without getting nauseous – or even leaving the room. When she’s irritated or angry or arguing she starts to become “hysterical” and needs to take deep breaths to keep close to rational. She whines, she cries, she mopes, she fails to achieve anything and has to be protected and sheltered.

Thirdly, she’s incompetent. Utterly incompetent. She’s supposed to help Hayes by being the supernatural expert but never once is her expertise used. Her room mate is more helpful than she is – and that only because Sophie is utterly incapable of keeping her mouth shut about the case. She will pass on important information to anyone and everyone she meets. Sophie fails to make a connection between the victims which she really should have and doesn’t even check the victims’ identities. When under threat Hayes tries to teach her to use a gun and she shoots the floor. Or the ceiling (even going to the range makes her gulp in fear – and she screams because the gun ejects a casing). At the end of a long lesson she can, just barely, occasionally hit the white paper the target is on. When menaced, she throws the gun at her attacker. She demands a full explanation  of a supernatural occurrence in earshot – in the very presence – of someone who is not aware of the supernatural – and is SHOCKED, SHOCKED I SAY, that the police cover it up and hide the supernatural nature. She works for the UDA. Her JOB is to hide the supernatural from the real world – but no, she cannot understand this!

What would almost be funny is she actually accuses Hayes of being sexist for not wanting her, a woman to get involved in the case, missing the fact she’s a civilian with zero relevant experience and an overall immensely incompetent and incapable person.

And she’s a freaking CHILD. This woman is supposed to be 33 years old. 33! I’ve seen more mature 14 year olds! Upon hearing the chance to work with Hayes she starts thinking of her outfit – she wants to play dress up and play at being CSI just like on the television. When she is given a gun to protect herself (something which is such a bad idea I can’t even begin to imagine any sensible person doing so) she is appalled that she may be expected to fire it rather than look awesome wearing it with leather trousers. In conversations she blurts things out constantly, then blushes crimson all the time. She stamps her foot – stamps her foot like a small child. Sophie is a bright, glowing red at all times, occasionally blurting out random words with no internal filter at all, while indulging in either constant drooling or childish fantasies that shows a disturbing unwillingness to treat reality as, well, reality.

Honestly, I’ve got more and more notes – like how she flirts with an evil predatory vampire for information with no plan or cover story and then needs rescuing because, ZOMG the evil predatory vampire wants to eat the human he’s flirting with. I just have pages of highlights with the words “seriously?!” “This is ridiculous!” and, finally, the last few chapters are a long string of “SOMETHING JUST EAT HER ALREADY!”.

If the next book starts with Sophie being eaten I will give it an extra fang. In fact, a short story that just involves Sophie falling off a cliff will get 4 fangs.

That’s not to say the other characters are any better. Sophie’s best friend is Nina, there’s a vague attempt to characterise her but fails because the whole back story rests on the premise that someone actually sent Sophie out, alone, on a mission to track down a rogue vampire – and since I can’t imagine any remotely sensible person trusting her to pick up an arthritic Chihuahua, I call shenanigans. Other than that, she’s interested in clothes. Obsessed in clothes (and joins Sophie with her man drooling).  This 200 year old vampire is completely concerned with fashion. And her nephew, despite being over 100 years old, is a teenager – a 100 year old teenager with all the angst. I think he’s supposed to be comic relief but… he’s just not funny. It tries to be funny, the book tries so very hard to be funny, but it utterly fails to elicit one tiny titter from me. Is there anything worse than comic relief that isn’t comic?

Then there’s the love interest. Hayes. He’s cocky, he’s arrogant, he’s pushy, he has awful taste (he likes Sophie after all) and he has no sense of boundaries. He kisses her when she says no, he uses the excuse of being undercover to grope her. He climbs into her bed, while she’s in that bed half naked. She kicks him out, he comes back and crawls in when she’s asleep. Yes, he’s a real keeper.

There’s also a random revelation about him (I won’t reveal it in case any of you have the strange, masochistic urge to inflict this book on yourselves) which I’m supposed to be all impressed by but instead combines to make Sophie’s presence on the case even more pointless than I imagined and was completely and utterly irrelevant to the story. I guess if you’re even remotely invested in Sophie as a character it may matter – but then you’d also probably be very very drunk (as I was sorely tempted to be reading this book).

The story – well Sophie and Hayes faff about a bit, make a pretence of investigating but… don’t. I mean, really they show up at a crime scene, she throws up and they leave. They go to a bar, hang around and then leave. It’s like if they show up at crime scenes they hope inspiration will strike or someone will confess or some deity will intervene out of sheer pity – because they don’t do any investigating; collecting evidence, gathering evidence, reviewing evidence? Nah, none of that – just wandering around randomly…. Until the big bad kidnaps Sophie (for story reasons, apparently, not because he finds her so very annoying).

Alas, Sophie does survive to the end of this book. And I am told a sequel has been perpetrated.

Oh and this book is set in San Francisco. Everyone is straight and white. Of course.

Do I even have to write a conclusion on how I felt about this book? It’s nearly impossible to enjoy a novel when you would happily buy tickets to front row seats for the protagonist’s execution.

Also, what the hell is going on with this book cover? Leaving aside she looks nothing like the protag, she's carrying a sword. A sword. If Sophie carried a sword she'd cut off her own damn foot.