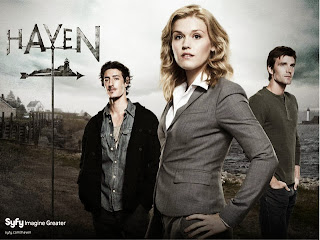 The Trouble starts early this week – around Haven people hear a terrible noise no-one else can hear – then they fall down dead. Ok, that may be the creepiest thing Haven has ever done.

The gang have all gathered to discuss William, the book, Jennifer and other randomness. They need to find the heart of Haven to have Jennifer open it and kick William out of town. Duke and Jennifer get on that, the only clue they have is that the image of the Guard tattoo in the book keeps fading in and out just like Vince’s tattoo

They go to see Vincent and Dave who are wonderfully bickering – and it turns out Vince’s tattoo is acting oddly, fading in and out on its own beyond his control. It blinks in and out exactly in sinc with the symbol in the book.

Vince explains that it’s not a tattoo, it’s a birthmark, the first born in the family always has it (they have Micmaw blood, apparently – so we can get a character that has hundreds of years of history in Haven, while only having that throwaway reference for inclusion of Native Americans). It marks his sacred duty to help and protect Troubled people – hence the reason he leads the Guard. We also learn that Dave was adopted, he and Vince aren’t blood relatives

Audrey and Nathan investigate the new deaths, consulting with Gloria (who is awesome). 3 people at once, at different parts of town all unrelated. William drops in to taunt them all with his rather awesome evil – and dares Nathan to arrest him – though people will keep on dying (call his bluff and hide him in a cage somewhere until you have the door open – c’mon! Like a free William is going to stop killing!) Audrey agrees to go with William, alone, to help solve the latest Trouble William has caused.

Alone William begins the poking – he refuses to accept responsibility since Audrey was the one who caused the Troubles – he just tweaked things a little (and this one was one of her favourites). He wants to connect to the real person – not the Audrey shell – and to do that he’s going to make her give someone a new Trouble to cure this one. In their fun past they used to make Troubles that were “complimentary” (so Jordan causes pain and Nathan can’t feel it, for example). And if this is a death-causing noise Trouble then the counter is a silencing one – while she’s figured it out Audrey does not want to give someone a Trouble. She will find another way – William laughs and takes her to the Troubled person – a baby with the hand print on his back.

William has Troubled a baby. When the baby cries, someone dies. William, again, blames that on her. Audrey and Nathan talk to the baby’s father – he knows about the Trouble, it’s his family Trouble, but doesn’t normally trigger until puberty. The Harker family kill people when they cry – so each generation they train their family not to cry from childhood, the father, Ben, hasn’t cried since he was 11. When his uncle with Downs Syndrome couldn’t be taught not to cry before puberty, they had to cut his vocal chords.

Audrey has an angst moment to Nathan – she’s worried about who she is, really, beneath the façade, that William wants to make her give a Trouble and that that may bring back the “real” Audrey – and she’s just very unsure about who she is and whether she wants to be the real her, after so long fighting to discover who the real her is.

Gloria arrives on scene – she is Ben’s step-mother. Who, of course, has excellent snarky commentary on “emotional unavailability” and a man who cannot be allowed to cry. She’s also spent years trying to research a way around the Trouble so she didn’t have to raise Ben not to cry – and found nothing. The last time it go out of control was 1901 and slaughtered a huge number of people until they killed the person – and Gloria isn’t letting that happen to her grandson.

They try their first idea – having Audrey hold the baby next time it cries, hoping her Trouble-ending power will stop the deadly cries – but that doesn’t work and kills Ben’s wife, Ashley. Lincoln, Gloria’s partner arrives to help support her and the show makes it really really really clear that he’s deaf in one ear (not only has he a very obvious hearing aid but he even draws attention to his bad ear, in case you’re not paying attention.)

William and Nathan have an antlers moment – and William punches Nathan which is a shock to him since, of course, immune to the Troubles William means Nathan feels it.

Audrey calls in Duke and admits to him that she can’t fix the Trouble – she’s found a picture of herself back when the 1901 deaths happened and she couldn’t stop it then either. She reveals to duke that William says she created the Troubles in the first place - and that he wants her to create a Trouble to solve this. Duke is very against Audrey doing that because the Troubles are dark and addictive (as he knows) and she may be starting down a dark path. She protests that she thinks she can hold on to who she is and Nathan arrives agreeing with her. Duke still thinks it’s a bad idea – if Trouble Making Audrey turns evil then they’re all screwed.

Audrey tries to bluff with William saying she’ll kill the baby. William calls the bluff – there are a number of babies in the Harker family, he will trigger them all early (is there a REASON why William is allowed to wander around again?) She agrees to make a Trouble

That involves her will shaping the Trouble, matching it to an appropriate person and the little box o’ doom with the black balls of goo. So that means creating a bubble of silence Trouble around someone near the baby. They need someone appropriate (yes they’re going to spend an age thinking through people before hitting the man with the obvious hearing problem which has been lampshaded so completely).

They finally remember Lincoln and, after Gloria’s objection and his agreement, they begin the process. She coats her hand in evil goo and touches Lincoln’s arm, leaving a hand print. It seems to work – and then everyone hears horrible, ear splitting noise. Which also wakes the baby and sets him crying. Oops, that didn’t go according to plan. 5 more people are killed.

William is all celebratory – except Audrey is still Audrey. And she says giving Troubles felt awful. He gives her the box – now it has 6 goos in there – and tells her to try again. Duke arrives and asks for the box – he was watching Audrey. When she created the Trouble he knows he felt her “original” self – and she liked it. Even though she says it felt evil, she liked it. She refuses to kill the baby – and Ben asks Duke to kill him – the Crocker curse could save them. Apparently one of Duke’s ancestors cured Gloria’s family curse.

Except Duke doesn’t have the curse any more – but when he realises Ben is sure, he sends him to the house and asks Audrey to re-curse him. As he explains to Jennifer, it has to be him because they know his curse, they know what his curse does, it won’t be an experiment like it was with Lincoln.

Meanwhile the Teagues and Jessica experiment with the book and find that when Vince holds the book, his tattoo turns, becoming a compass. They follow where the needle is pointing and find the lighthouse – there has always been a lighthouse in Haven, it I the heart of the town. In the lighthouse there’s a trap door only Jennifer can see. Down there they find a large room with the Guard tattoo carved into the floor – with spots for 4 people.

Gloria isn’t thrilled with the plan and there’s a tearful moment where Ben talks to her about why it’s necessary. They all gather and prepare to re-Trouble Duke…

Why is William out and about?

By all indication it takes physical contact to mess with Troubles. Why isn’t he in a concrete box? Why did they let him wander around?