Dracula Season One, Episode Six: Of Monsters and Men 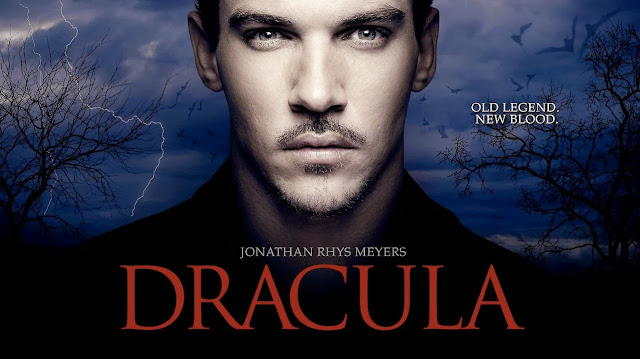 At Carfax Manor, Greyson walks out into the sun and is completely amazed.  He raises his arms in triumph. The scene switches and he is back inside.

Lady Jane, Lord Davenport and Laurent are discussing the fact that Greyson has yet to be seen in daylight and Lady Jane argues that vampires simply don't run businesses the way that Grayson does. Laurent brings up all the people who have died and that if Greyson is successful what it will do to the Order's investments.  Lady Jane assures him that she would have noticed if Greyson wasn't human.  Davenport agrees with Laurent and asks for permission to investigate, but Laurent denies Davenport, claiming to know a way to flush out the beast.

Lady Jane and Greyson sit at a restaurant where Mina is seated across the room watching a card trick with Lucy and Harker.  Greyson interrupts and explains to Mina how the card trick she just watched was performed. Harker and Lucy are clearly not impressed with the interruption.  Lucy heads over to Lady Jane and is invited over for tea. Lady Jane tells Lucy that she knows what it is to be denied one's hearts desire.  Lucy immediately denies that she has no feelings for Greyson and Lady Jane replies that she wasn't talking about him. Lucy makes a quick exit.

Greyson apologizes for leaving the engagement party early and then places the king of hearts in front of Harker and the Queen in front of Mina saying that no evil Jester can sever their bond.  Greyson then orders that their bill be put on his account before walking away.

After leaving the restaurant, Mina and Harker are laughing and walking in the rain.  They head into Harker's home still laughing and playful.  Mina removes her dress and turns to face Harker in nothing but a shift.  Harker asks Mina if she is sure and when she nods yes, the two begin to make love. The next morning, Harker suggests that they elope, arguing that the don't need the trouble of a formal wedding when they can just be together.  Mina asks if what they did makes their vows any less sacred and adds that they should get married in the church before God.  Harker agrees that they should set a date. Harker asks Mina what she is doing later and she says that she is due at the university.  Harker suggests that he is playing second fiddle to her work.

Harker shows up at Carfax and Greyson asks about the foundries in England with nickel/steel alloy. Harker says that there is only one and it is owned by the American Ewan Tellingford. Tellingford has a fanatical interest in everything wild west, particularly Poker. Harker informs Greyson that Ewan is holding a game tonight.  Renfield makes his appearance and Harker asks if the police have made any headway on his attackers and Renfield replies no. Harker questions that a man Renfield's size was attacked and Renfield snarks that time heals all wounds.  Renfield hands Greyson a note and he jumps up immediately asking Harker to leave.  Renfield tells Greyson that he has found the Dresden Triptych.

Cameron is in a meeting with Daveport and says that they intercepted a telegram about the Dresden Triptych, which is apparently a 15th century Romanian rock. Cameron says that there will be an auction next week and reports that Greyson has been looking for it for quite some time. Davenport says that if Greyson wants it, then he does as well.

Greyson is playing poker and folds his winning hand of four kings.  Tellingford questions why Greyson folded nine straight hands and Greyson simply says that the cards weren't to his liking.  Back at Carfax, Greyson snarks to Renfield that Tellingford is trying to explain how he lost his business in a card game.  Renfield informs Greyson that the annual stockholder meeting for British Imperial Coolant has been rescheduled to noon instead of Friday at noon.  Greyson orders that Renfield sends his regrets but Renfield points out that Greyson's absence will lead to a proxy vote to remove him as head of the company, causing him to loose the coolant. Greyson is angry and brings up that he told Van Helsing to delay their fight against the Order until the daylight serum was perfected.

Mina is at the university looking at slides of blood.  When she introduces more blood to the slides the platelets begin to move making her wonder what is going on.  Mina injects the rat with the blood but when it doesn't move, she puts the rat away.  What she does not know, is that seconds after she puts the rat down, its foot begins to twitch.


Lady Jane is meeting with Lucy and says that when she saw the way that Lucy was looking at Mina, it reminded her of herself. In excitement, Lucy spills her drink and Lady Jane reassures her that these urges are commonplace. Lady Jane reveals that she had several female lovers before sleeping with a man.  Lady Jane then suggests that Mina likely feels the same about Lucy and adds that women have a secret way of expressing desire like a touch of the hand or a gentle hug.  Lucy is completely captivated by Lady Jane, who suggests that Lucy should tell Mina how she feels.

Van Helsing reports that the heart alone cannot force the serum to move through the body.  Van Helsing says that they will be ready to test in a few days but Greyson demands that it be done tomorrow, as he looks at the listing for the auction for the Dresden Triptych.

Back at Carfax, Greyson is spitting mad at Harker for reporting that General Shaw is a traitor in the newspaper. Harker claims that he used a friend of a friend to get the story printed and Greyson demands that the story not get traced back to him.

Davenport is having a meeting and learns that Harker is the one who revealed what happened to Shaw.  Devenport wants to know by any means necessary why Greyson is paying off Vera.

Lady Jane meets with Laurent and she shows him the story on Shaw.  Lady Jane points out that the allegations still need proving in court but Laurent responds that Shaw is now guilty in the eyes of public opinion. Laurent declares Shaw useless to them now and suggests that Greyson is behind this.  Lady Jane points out that Greyson has not cancelled the meeting and suggests that Laurent leave the vampire hunting to her. Laurent believes that there is still time to cancel and adds that if Greyson really is a vampire that she will face the full wrath of the brotherhood and him as well.

Harker and Mina are riding a carousel when Harker notices Lord Davenport. Davenport asks for a word with Harker.  Davenport asks what need Greyson has for Harker and now with the libel of Shaw he knows why Greyson employed Harker.  Harker claims that Greyson wasn't involved.  Davenport asks what makes Harker think that he is immune from the same fate.  Davenport's man then hands Harker a ticket for a play.  On the stage is Vera  and when Harker flashes back to his meeting with Vera he realises that she is an actress and walks out of the theater.

Lucy is looking over a fashion magazine while Mina is lying in bed.  Mina says that she thinks she being deceived by Van Helsing and Lucy asks what the professor would gain from lying. Mina says that the substance she found could revolutionize medicine.  Lucy gets into bed and Mina apologizes for all this talk of science, stroking Lucy's face.  Lucy leans in and kisses Mina and Lucy admits her love.  Lucy tells Mina that they can be so much more than sisters and admits to breaking things off with Allister because she loves Mina.  Mina sits up as Lucy continues to profess her love. Mina says that Lucy doesn't like Johnathon and that it's all been about her own gain.  Mina questions if Lucy's friendship has been a pretense and orders her to leave.  Lucy storms out as Harker walks in.

Greyson is attached to a machine and Van Helsing explains how it's going to work. Renfield questions if Greyson still wants to do this and Greyson replies that he has no choice.  Greyson is subjected to a large does of electricity and then the serum is injected into his chest.

The Order is set up for the meeting and Laurent and Lady Jane stand outside.  Laurent tells Lady Jane that it is unfortunate that Greyson has not made an appearance.  Renfield and Greyson appear and Renfield instructs Greyson to make it quick because they don't know how long the serum will last.  Greyson hops out of the carriage and makes his way into the meeting.  He walks into the sun as Laurent, Davenport and Lady Jane look on.  The members of the Order are shocked to see him as Greyson opens the meeting.  Renfield interrupts the meeting making it appear as though Greyson has been called away because it is clear that he is now beginning to suffer from the effects of the sun. Greyson moves to leave and is stopped by Davenport saying that Greyson has not answered his questions.  Greyson says that they are on track and rushes out.  In the carriage on the ride back, Greyson is badly burned and screaming in pain.

In his lab Van Helsing looks at a picture of Laurent and remembers his family being pulled away and burned alive.  Van Helsing is clearly tortured.

Vera is now in an empty theater and pauses when she hears a sound.  Vera calls out that she did everything that was asked.  A very burned Greyson appears and feeds on her until his skin is back to normal.  Gryeson places her in a chair and walks away.

Okay so it as we have long suspected, Lucy has a thing for Mina though I cannot understand why because Mina is completely self involved and foolish.  That these feelings were then used by Lady Jane is really disturbing.  Lucy is the only gay character on the show after the typical tragic death of the gay male lovers.  Her emotions are given no respect and I am decidedly disgusted by how Dracula is treating its gay characters. I suppose one could argue that given the time period that Mina was naturally disgusted but at the same time, she and Lucy have been close for years.  I think a bewildered Mina makes sense but a horrified one - one who sends away her friend in pain makes no sense to me whatsoever.

Speaking of Mina, how many wanted Van Helsing to drop a hammer on her?  Harker has made it clear that he has no respect for her profession, tossed aside his friends and now complains about playing second fiddle to her job. Why is she even with him?  I am not sold on the supposed love between these two because Mina is clearly more in love with herself and for his part, Harker's great love also seems to be himself.

I much enjoy Lady Jane when she does not have a scene with Greyson because their chemistry is so bad.  That being said, I loved how she told Laurent to leave the vampire hunting to her and how firm she is about her abilities.  The problem however knows that it is Laurent who is right thus undermining the only strong female character that Dracula has.