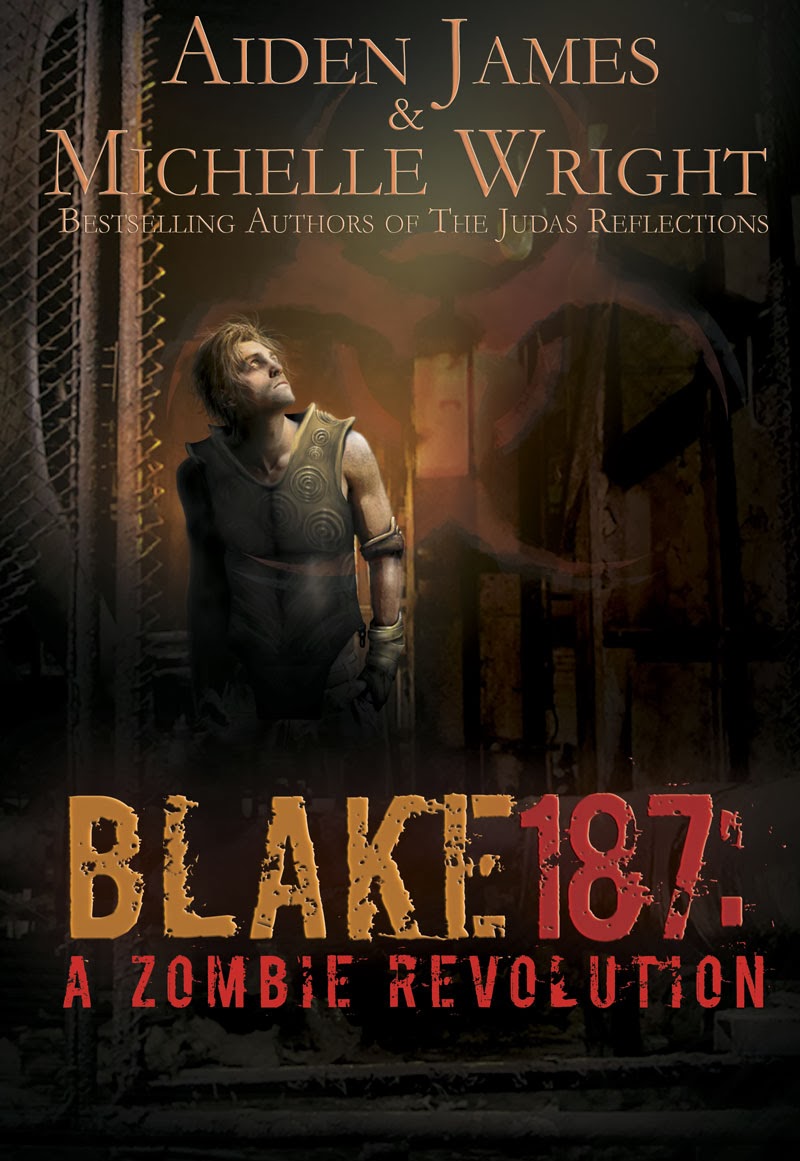 Blake is a zombie – assigned the number 187 when he rose from the dead after he tried to kill himself to be with his long dead girlfriend, killed in one of the plagues that ravages this broken, dystopian society

Zombies are brought back for one reason – to work for an ever dwindling human population. Kept rational by medication, they exist to serve as a slave class to the living who regard them with disgust and revulsion.

Once they have finished rehabilitation into becoming good little followers of the revered god-like leader of their society (and failing to revere him is not… healthy). Blake is more stubborn and rebellious than most –and less able to guard his tongue as they slowly grind him down. His choices, such that they are, are to be finally broken and become the model zombie they want…

…or find a way to escape, should that ever be possible, if he can exist without the meds and if the horrors that exist in the waste do not get him instead.

This is a book of two halves. The first half of the book I nearly put it down – it was so very close to being a DNF review.

The concept was interesting – a dystopian world ravaged by plague and disasters told from the point of view of a zombie who had basically been raised as slave labour – was an interesting one. But the way it was presented was really rather terrible. We followed the protagonist, Blake, as he was returned from the dead and rehabilitated.

And by “followed” I mean he goes from place to place being randomly abused while we were treated to epic info dump after info dump after info dump. Everything about this book is told there is virtually no show at all. We’re told about the witches and how they’re oppressed and treated. We’re told about the reanimation process. We’re told in incredible depth about the nature of this dystopian world – and it is a really good world. From how breeding is controlled, to the manufactory sterilisations and the control by fear and propaganda and shortages and the environmental destruction and a thousand things more – this world is incredibly detailed with so many different elements that make up this deeply repressive society. A huge amount of work has gone into this world building to such a degree that it feels almost like the setting for an RPG because there is such a focus on every last detail of the world and how it works. It’s very very well made

But not well presented, because all of this is told to us in a series of repeated lectures. And no matter how fascinating the subject matter is, info-dumping is a clumsy way to convey your world setting – it also includes a whole lot of information that isn’t strictly necessary. Sure it’s fascinating to learn the minutiae of the society, but a lot of this isn’t relevant – or isn’t relevant ion the detail that was reached – to actually tell the story.

Blake makes his way through various stages of rehabilitation, imprisonment and eventual slave labour and in doing so we rarely get shown the things he talks about. We see abuse from his controller, but very little in the way of societal oppression against the zombies because we don’t have chance to see society. The guards could be abusive prison guards and the zombies just other people rather than an abused class in the society for all the substantive difference it makes, for example. Again – lot of tell not a lot of show.

In between the ocean of exposition we do get brief introductions to Pete, Zinda and Helena, the other principle characters and some half-decent attempts at character establishment on Zinda. But not much, not even on Blake (beyond a basic decent guy magically escaping most of the prejudice of his society, Blake doesn’t really have a lot of identifiers to establish him as a character).

But after that we break out into the action – escape and rebellion and revolution. The writing is quick, the action well written and the pacing sprints forwards. It’s energised exciting, complicated full of plotting and planning and abrasive characters and a whole new dimension to the fascinating, but slow, information gathering of the first half.

And like the person who can never be pleased, I have to complain that it is rather too fast. We have a lot of characters introduced in rapid succession without any real attempt to build them. The characters are in the wasteland with not a lot of information about what the wasteland is. The characters they meet seem to be astonishingly quick to accept them – especially Blake who is very quickly accepted for little reason. I know the reasons presented, basically because Blake is free from prejudice and basically a genuine guy, but I’m not sure how much of that was presented to the other characters rather than just me, the reader, for those characters to then accept Blake on the strength of it.

But the story really does pick up – and it’s certainly strengthened by the world setting that has been vividly revealed before then.

Inclusionwise – I can’t recall any POC off the top of my head or in my notes. We had a blink-and-you’ll-miss-it lesbian who basically existed for a page to tell us that the society is also brutally homophobic as well, then disappear. Similarly we have no disabled people but the long exposition did reveal how prejudiced the world is against the disabled who are considered defective – and the whole selective breeding programme and forced sterilisation of the majority of the population is designed to prevent disabled people, or non-perfect people, being born

This mentioning for the sake of establishing oppression also applies to a lot of the female characters – especially with regards to a whole lot of rape and sexualisation in the book. Even female zombies are sexualised and used as sex puppets. Witches are raped, often gang raped – even attempted rape by zombies who are functionally impotent which seems like a rather ridiculous extreme to take the gratuitous rape. It seems to be the rule of the grim-dark, if you want to produce a really gritty setting the quickest way to achieve it is with wall-to-wall rape without any particular story reason beyond “It’s GRIM AND DARK!”. Even in the wastes they find a zombie being kept as a sex slave – and that isn’t even an attempt to establish the world, it’s just there because… I have no idea.

This book could have been awesome and there are seeds of that awesomeness there. The world is incredible, excellent and amazingly well detailed producing a very believable and solid dystipian. There is some excellent political commentary and some wonderful battle back and forth between revolutionary hope and historical cynicism that questions just how much a revolution can change things – and whether revolution is really the answer, or just finding your own space where you can establish your own home for your own people. There’s lots of discussion about prejudice and disunity even among groups that are equally persecuted who still have trouble working together because of the ongoing stereotypes and lies attached to them by the ruling power (albeit using fake prejudice as proxies). There’s a great story brewing there that brings all of this together.

But the execution needs some work, the world building needs paring down and spreading along the story, there needs to be more show and less tell and less using minority characters as a way to highlight oppression. It’s a great start, but some polish and growth on the story will turn a good book with some unfortunate elements, to an awesome book and potentially awesome series.