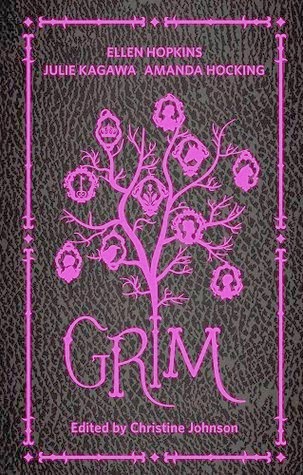 Including:
The Key by Rachel Hawkins; Figment by Jeri Smith Ready; Twelfth Girl by Malinda Lo; Raven Princess by Jon Skrovan; Thinner Than Water by Saundra Mitchell; Before the Rose Blooms by Ellen Hopkins; Beast/Beast by Tessa Gratton; Brothers Pigget by Julie Kagawa; Untethered by Sonia Gensler; Better by Shaun David Hutchinson; Light it Up by Kimberly Derting; Serpent’s Tongue by Christine Johnson; Real Boy by Claudia Gray; Skin Trade by Myra McEntire; Beauty and Chad by Sarah Rees-Brennan; The Pink by Amanda Hocking; Sell Out by Jackson Pearce

Reviewing anthologies is always a balance between reviewing the individual stories and reviewing the book as a whole; and I think a lot of Anthologies rely on the former (having some recognisable names and making sure at least half the stories are good quality) without any real consideration of how those stories come together

Grim is an anthology that got it right in terms of cohesion. The stories are all re-imagined fairy tales  with a twist – and they do all have an interesting twist. Contrary to the hinted blurb, the endings are not all grim and dark – far from it, happily ever after predominates them all. But they’re not necessarily the Happily Ever After that Disney would generally accept as ideal.

In terms of twists I particularly like the Princess and her novel view of a curse in Raven Princess - I really like how the curse came about, the natural frustration and regret that would cause it and then lead to the mother’s desperate amends (it’s also nice to see a mother in fairy tales who isn’t evil). I also love that the hero is a hero due to his kindness and utter failure to be violent – he is kind to strangers, he is generous with what he has, at no point does he hurt anyone or even try to do so. He is a hero who a Princess can be sure she wants to be with – not just the guy who slices and dices things really well. In all, this was my favourite book in all the series

Figment is perhaps the most surreal of the stories, not my favourite but definitely the most unusual with its peculiar protagonist and the very nature of fame and fortune and talent – and the question raised of how much have you truly achieved if you have it delivered to you by another? Untethered also had an excellent twist with a wonderful look at grief and haunting in this deeply sad, slightly unsettling story.

In fact, this book has some very good stories for excellent thinking – I mentioned the pacifist hero of Raven Princess, but Sell Out, a truly weird retelling of Snow White with a protagonist who has the power to resurrect the dead with a kiss – which is sold out to rich people, of course, has an excellent message about judging people by who they were rather than who they are.

There weren’t any stories in this book I didn’t like which is really rare for an anthology; Skin Trade was probably the closest to a story I was tempted to skim. I would say that The Key felt too much like an out of place snippet and Twelfth Girl was too predictable and lacking in any real twists to be meaningful alongside all of the other really surreal and powerful stories. Similarly, The Pink felt lacking in any real depth with a whole lot of blah characters and plot line. Beauty and Chad has considerable comedy points for its Frat-boy-turned-Beast Beauty and the Beast retelling (no Beast should ever say “dude” and the idea of the local village turning the Beast into a tourist attraction is hilarious) but was a little lacking in style – I think if anything was jarring in this book then it was this story – light and comic, most of the rest of the stories are dark – I think it would have been a better story to end on, to lighten the feel. Before the Rose Blooms was beautiful and artistically written in its way, but despite the rich world building and the excellent style, lacked any meaningful substance.

In terms of racial inclusion, the anthology does pretty damn poorly. Out of all the stories only Real Boy has an unambiguous POC protagonist. There’s even a terrible lack of side characters who are POC as well. We do, surprisingly, have more GBLT with Raven Princess having an excellent side character of a gay giant couple (continuing that story’s mission to subvert all the things!) and Twelfth Girl including a bisexual protagonist (there is a suggestion that the woo-woo in the story makes the female object of her affections specially compelling but no indication that she isn’t naturally attracted to women: in fact, it’s possible that the man she’s attracted to was entirely woo-woo based).

There were a lot of class analysis in the book – The Key has a protagonist living in very humble circumstances, yet stubbornly refusing to be ashamed even while her boyfriend hides her. Sell Out places the powers of life and death in the hands of the rich – with the added irony of the man with this incredible gift drowning in debt due to medical expenses. Twelfth Girl has a take down of the privileges of wealth – and how even extending those conditionally to employees can be another fetter and a trap that can so easily spring. Serpent’s Tongue was probably the best though – with its characters trapped in poverty and addiction – with the blessing just another way to trap you, and a curse a final key to freedom.

On top of that we have some other nice subversions – Figment has a male protagonist who plays with dolls, Beauty and Chad plays with a cross-dressing Beauty, Thinner Than Water is an extremely dark, powerful story of familial abuse and a daughter’s fierce vengeance against the father – and the kingdom – who betrayed. Beast/Beast has an awesome retelling of Beauty and the Beast that massively challenges the inherent problem of having a CAPTIVE Beauty fall for her kidnapper in the original fairy tale – with love being impossible between them until she has a free and unmanipulated choice.

Even what I think of as the middling stories have questions and wonderful subversions of their original source material – like The Brothers Pigget taking down love and entitlement while turning The 3 Little Pigs on its head, and Better challenging the nature of humanity and how unreasoning bigotry is mutually destructive while turning Pinocchio into something with completely different messages – as did Real Boy discussing the selfishness of love in another Pinocchio setting or Light it Up with a modern – and even darker – retelling of Hansel and Gretel with no sugar coating on the cannibalism.

I’ve said before that I think short stories often fail because the authors don’t know how to treat them – how to make a fully enclosed story that isn’t sparse and doesn’t beg for more – while at the same time not being overwritten for the small space – but this format works excellently with fairy tales, tales that aren’t meant to be long and come with a context that doesn’t need to much explaining. While there are a couple of stories I wasn’t a huge fan of, there were none that were duds; if it weren’t for the lack of inclusion this would be an awesome book – as it is, it’s one of the best, maybe even the best, anthologies I’ve read.