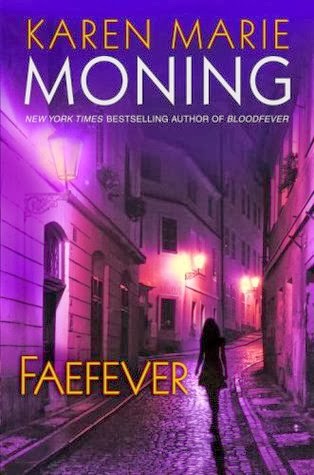 Mac continues her quest for the Sinsar Dubh – but also has to figure out what to do with it if she finds it. When she comes near the book she is unable to act due to the pain – and can she trust Barrons or V’lane, either one, with an artefact of such power?

And things are getting worse, more of Dublin is falling to the Dark Zones and the walls of the Unseeling prison are beginning to crack. If they cannot find a way to patch them before Samhain, then all hell will break loose.

At one point in this book Barrons complains at Mac that she is too passive. Well, I have to give the book one thing, they managed to lampshade what is probably her worst character trait (and it says a lot that this, out of all the other problems, is the worst character trait). Mac does nothing. If left to her own devices she would spend her entire time twiddling her thumbs in the book shop hoping that the Sinsar Dubh comes to her, that her sisters murderer decides to give himself up and that all the fae go away. She spends her entire time moping and reacting. That doesn’t mean she does nothing – but the only reason she ever acts is because someone has forced her – Barrons, V’lane, the Sidhe Seers, Christian – someone pushes her and she reacts. That’s it. And because she’s the protagonist that’s what we get for the whole book – her moping and occasionally doing stuff to react to the random events the various people force her into before going back to moping again.

Which means the book has no overarching plot. What is the book about? Finding the Sinsar Dubh – same as the last 2 books – except she doesn’t actually do anything to find it. So it’s just mope mope mope FORCED EVENT more moping and then all the action (which, to be fair, is pretty damn good) is kind of clinging in the last 8% of the book and ending with a cliffhanger.

Mac’s passivity manages to be even more annoying because the one “active” thing she can bring herself to do is to keep secrets. A large part of this book involves Mac deciding who to trust – V’lane, Barrons or whoever. These are reasonable concerns considering that neither of them are trustworthy and they both have zero respect for Mac. This would be fine if she did something with the knowledge she had beyond actively sabotaging their efforts to find the book. The Unseelie have to be stopped, the book has to be found but she’s not sure who she can trust with the book – fine; but how is it sensible to have the alternate plan “well no-one’s going to get it then!” and promptly stick your head in the sand. Which is basically how she ends the book with all this action – waiting for the worst to come and hoping others can fix it.

Her keeping secrets would also be better if she ever could actually manage it – but she fails completely to do the one thing she’s actually trying to do. Both V’Lane and Barrons easily learn everything she tries to keep hidden, making her one, tiny piece of agency collapse horribly. In fact, that pretty much sums up their treatment of her in general – she’s less than a tool to both of them, neither have any compunction about forcing her, marking her against her will, using their supernatural abilities on her to make her do what she wants which causes her to… mope. She is a passive, helpless, disrespected, badly used and often abused tool. On the plus side, she’s at least aware of this (hence her wariness of both of them), on the minus side, she definitely appears to be melting to both of them despite their abuses – and her main reason for that simply seems to be “they could abuse me even more than they are doing”.

This is perhaps Mac’s worst trait – because it breaks the entire story. It makes the entire book one long mope with endless internal monologues and no real advancement. It doesn’t help that the writing is some of the most painfully drawn out, over-descriptive, repetitive, distracted text I’ve read in a long time – and I’ve read a LOT of drawn out, over-descriptive, repetitive, distracted text. It’s also clogged with completely unnecessary recapping just for bonus funsies.

But back to Mac – because she is terrible in other ways as well!  She’s incredibly entitled – not towards Barrons and V’lane who are both entitled to  swift kick to the yin-yangs – but towards the police she has an astonishing sense of immunity (especially as an immigrant who’s illegally working) quite happily telling him to let a crime go. And the Sidhe-seers – see, this book is written from Mac’s point of view so we’re supposed to see the sidhe-seers as evil, conniving fools who are too selfish and self-absorbed to get anything done… but step back from Mac’s dubious point of view: this is an organisation of several hundreds sidhe-seers who have existed for centuries, even millennia (despite their dubious English motto) standing together, gathering resources and facing the fae… and along comes this American in her early 20s demanding their resources without following the rules or putting in her membership dues (who still thinks it’s clever to be snarky about Irish spellings). And she’s angry at you because you didn’t throw away your life – twice – because she was playing with the faeries.

Tell me you, as head of this organisation, would welcome Mac with open arms – because I wouldn’t.

To add to this, Mac is annoyingly vapid as well – take this line:

I've found my calling, and it isn't being a sidhe seer. It's running a bookstore, especially one that carries the best fashion magazines, pretty pens, stationery, and journals, and has such an upscale, elegant atmosphere. It embodies all the things I always wanted to be myself: smart, classy, polished, tasteful.

Oh Mac, “smart, classy, polished, tasteful” are never ever words I would use to describe you. It’s also the first time I’ve met someone who dreamed of running a bookstore without mentioning, well, actual books in that dream. You’d don’t want to be a book store owner, Mac – you want to be a newsagent. Possibly a stationer.

Also, can we remove how hot everyone is -especially since everyone is an arsehole. V'lane is sexier than pure sex, yes we get it - move on and try to remember he's a mind-altering rapist. Barrons causes endless lust in her, yes we get it - can we move on and remember he's a tyrant who treats her with the utmost contempt. Even random Christian from Scotland is super sexy and we have to be told this - even Christian's unnamed dreamy-eyed colleague is sexy. Enough, enough enough especially with the men who are being openly predatory

A lot of the times when I write reviews I say things like “X is poor but I’ve read worse” or “it’s not the worst example”. Well, congratulations Mac, occupy that dubious step with a very few, equally unpleasant contemporaries. You are the Worst.

I’ve spent most of this review focusing on Mac – but that’s because, as I’ve touched in passing, Mac is the whole of this book. The plot is a series of Mac’s reactions until things belatedly start happening, most of the text is Mac moping, monologuing and generally filling up the word count with her repetitive stream of conscious, her doubts, her worries and more moping. The book is Mac – and a not well written Mac at that. The world itself received some development in the case of info-dumps but nothing earth shattering.

And the whole thing is poorly research – there’s little of fae mythology in the actual fae (and never really has been – hence the Spear of Destiny). But even aside from the fae, it’s terrible research of Dublin – which the author seems to think is somewhere north of Svalbard and can somehow be in the depths of winter while Georgia is in the middle of a scorching Summer. And enough moaning about the rain – Dublin has LESS annual rainfall than Atlanta, Savannah, Macon, Columbus – it’s possible there’s some ultra-arid part of Georgia I don’t know about but most of the cities I checked had more – sometimes almost double – the annual rainfall of Dublin.

There is also zero inclusion of minorities in this book.

Maybe the story will change dramatically after the intense action of the last 10% of the book… but I can’t say I have a lot of hope. Especially if going grim and dark contains more rape scenes - which is a horrendous way to go out. Rape is over-used to make a setting grim and hopeless, but this is compounded repeatedly by using woo-woo to make the victim apparently enjoy the experience - it was a poor book that ended with a deeply unpleasant taste in the mouth. It would be almost impossible to do this scene well - and it didn't even come close; especially since it follows a book of emphasising the sexiness of the predatory men