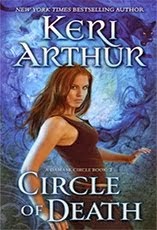 Kirby’s life has just collapsed around her – after a life of constantly running from the threats her best friend Helen can see in the future, those threats have finally found them. Helen, the one person she had in her life is dead – and whatever dark force killed her is now hunting Kirby.

The Damask Circle are aware that there are magical slayings going on and Camille, Russell and Doyle have been sent to investigate; Doyle to guard Kirby while they figure out what is going on. Of course insta-attraction hits.

The force threatening them is far closer tied to Kirby than they imagined – but to fight it they need to dig into her mysterious, and painful past.

I love the Damask Circle world's potential. It’s crammed full of supernaturals, vividly described and handled powers and lots of cunning nefarious plots around the world that need uncovering and foiling. It’s International rescue, with vampires and werewolves.

You could tell so many awesome stories with this world – and I can kind of see them. But they’re obscured so much by a very very dull romance. And that dull romance completely overwhelms any kind of world building (can anyone explain the telepathy between the main characters in this book? Anyone?) so more sexy times can be crammed in

The female protagonist is vulnerable and uncertain (in this book, newly shaken by a murder) – she has had an unhappy and/or outright tragic childhood (in this book, she’s an orphan with an abusive past) which has left her with few family ties or support (orphan) and those either dubious or soon to be uprooted.

She is sexually highly inexperienced (in this book her trauma makes her too uncertain with men), having few past lovers and those being extremely dissatisfactory or outright abusive.

She has some deep, powerful woo-woo but doesn’t understand its full potential and is probably afraid of it and runs from it or avoids it. But with the male hero’s reassurance and guidance she gains more confidence in her power

Despite having deep and powerful woo-woo she is completely ignorant of the supernatural world until the male hero arrives to open her eyes and then play guide (despite every other child in her foster home having woo-woo, she was still ignorant). Her woo-woo will be magic, his woo-woo is more likely to be related to physical prowess (she’s a witch, he’s a werepanther).

Over the course of 10 minutes, they will fall deeply, madly in love and be engaged by the book’s end – after about a week of knowing each other (2 days. Two. Seriously. This is dubiously explained by Doyle’s father and grandfather also proposing to complete strangers – which somehow makes this better). At most.

This obsessive attraction will be accompanied by them lusting over each other in the most inopportune moments, up to and including having sexy times when they really should be getting on with something vastly more important (in this book when hiding from people in a house they’ve broken into they actually have sex. While trying to hide silently).

Despite falling in love with the scared and vulnerable heroine, the hero will try to fight this because of some convoluted reason but will usually default to “my job keeps me too busy/my job is too dangerous” (if the latter throw in lots of overprotective annoyingness). In this book Doyle worries about his job taking him back to America

To be fair to the book – and the series, I’ve seen all these tropes done many times before and far far worse than in these books. In fact, while they irritate me, I still generally enjoyed each book, if not nearly as much as I could have and they were well written with a decent story despite the tropes getting in the way, ruining the characters and robbing it of a lot of originality.

For extra fairness, I have to acknowledge that while the Nikki and Michael series and the Damask Circle series are both being republished – they are old series as well and perhaps, back then, these very very very tried tropes were rather… fresher than they are today.

The sad things is the underlying story – stopping this powerful magical force forming, following up the clues from Kirby’s repressed memories and rushing to save lives of not just innocents, but the entire world against a backdrop of a fascinating world full of creatures drawn from all the world’s mythology is really excellent. And the Damask Circle? A force of international mystical police trying to curb the worst excesses of the supernatural? Great idea! Let’s follow it! Let’s take a team of about, 6, and follow various members of them on different missions. Pair them up differently, mix and max their strength with Selene, the ancient witch guiding them – this could be awesome

If you sent them on missions – not them going off somewhere, finding some young ingénue and then grabbing the next flight to Vegas. This just renders the characters bland and kind of interchangeable – in fact, I was far more interested in Camille, the 60 year old in psychadelics and leather trousers than I was in Kirby or Doyle. There were elements of Doyle and Kirby I liked – Doyle’s protectiveness was at least couched in common sense, and Kirby begins with an admirable amount of suspicion and doubt as well as concerns about Doyle’s willingness to kill – but this quickly fades into love. Kirby’s also not Spunky – oh she does classicly spunky things like running of alone,  but only for some very strong, sensible reasons. There was also precious little inclusion in this book – one disabled POC who was the very epitome of vile and not GBLT people

As a last complaint – this book was set in Australia and I kind of missed it. There was very little sense of the location – or that Kirby is Australian (the fact she thinks of Russel’s looks as “All American boy” for a start); not language or description or setting – there’s just one brief comment about motels. in fact the world building in general is just lacking

This book annoys me not so much for what it is, but because it has all the ingredients to be something great… and it isn’t.