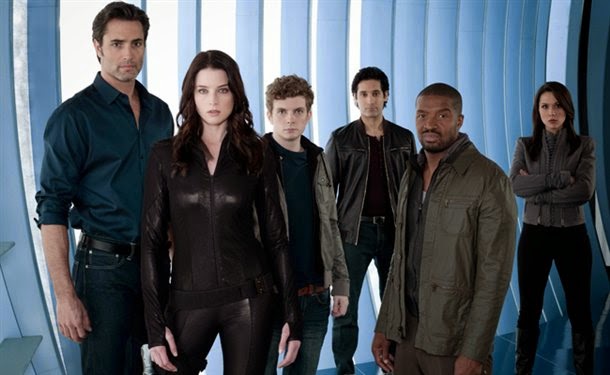 We left off with all kinds of chaos – including Alec using the time travel device not to send Kira home – but to go and save Emily.

Kira is in a Freelancer prison along with Garza, Kellog and Jason – and we have a reminder that the dead Liber8 member Curtis is neither dead nor Liber8. He takes Kira to an interview room where he tells her they’ve all been had by Alec. Curtis and the Freelancers want to know when Alec is. (Yes, when). She describes the death of Emily at the hands of the Freelancers (Freelancers need to take better notes) and still wants to know why Curtis isn’t dead since she did the killing and all. Apparently soon she will know everything and see the “battlefield” for the first time – totally not ominous.

As if this show weren’t confusing enough with the time line, we also have to play the “one week earlier” game. Alec has successfully travelled through time and buries the time machine (if by “bury” we mean “put in a hole less than 2 inches deep”) and repeatedly shows us the nifty features on his phone which I’m sure isn’t blatant product placement, honest.

Future Alec finds Emily who is with Past Alec – Alec, despite being a genius, doesn’t think things through much. He’s spotted by Jason who sees 2 Alecs and realises there’s time travel afoot; he agrees to help. Whether that’s useful or not is somewhat in doubt. Future Alec hits his lab and has to deal with a highly clueless Kellog, including using future knowledge to reveal poor Kellog’s plotting and Escher’s evil schemes.

Future Alec runs into Emily and does an awful job of covering his shock and emotion – and tries to get her to go to Thailand.

Kira is taken to see Catherine, the head of the Freelancer cell who has some exposition for us: 100 years after Kira was born (even further in the future) a war began as time travel technology became more commonly available. Laws were created to stop people messing with the time line for personal gain and the Freelancers came together to try and stop people screwing with history. It started with their founder going back 1,000 years to create his little cult to always be ready to fight time travelling naughtiness. This also means most of them don’t travel through time – because they have agents in every age and excessive time travel is kind of the opposite of what they do.

Anyway, Alec has messed with the time line and created a new branch – a branch which he is now on. Apparently that means he ISN’T on the current branch which is awkward since his global corporate empire kind of entirely defines Kira’s world and future. So Kira and the Freelancers have a common goal – restoring continuity. And they want Kira to fix it because they’re limited and in trouble for letting it happen at all.

Apparently collecting all the time travellers is no longer sufficient to fix what Alec is breaking since he is such a pivotal historical figure. And Kira is just not that willing to jump on the Freelancer bandwagon given the givens. She’s lead back to her cell and on the way crosses path with Garza and her own guard – deep eye contact and a fight scene follows – Kira and Garza fighting off both guards and another who joins, with the addition of a gun Garza manages to grab. This is why you don’t chain people’s hands in front of them – it just puts lumps of metal and useful chain on their fists.

Freed, Garza and Kira make a quick truce. Elsewhere in the base, Curtis tells Catherine what a bad idea it is to recruit Kira since she’s a brainwashed cop and Catherine hits back that she’s a mother so that overrides right before the alarm sounds (cop or mother irrelevant, can kick arse almost as good as Garza is far more pertinent).

Garza and Kira make their way through the tunnels, taking out another guard who Garza kills. They have him down, unconscious and she shoots him in the head. She doesn’t play around – and Kira doesn’t object. They talk while moving through the tunnels and hiding from guards and agree that if they get caught Garza will distract them while Kira runs and gets help. But when it comes time to implement the plan, the guards shoot Garza. She reaches a tunnel to the surface – only to see that she’s very high up and there’s a storm – a very violent storm. Curtis takes her and drags her back to Catherine – but the storm is now causing tremors it’s so violent.

The storm is the time line collapsing – and taking them with it. All they have is like a time travel escape pod to load Kira in it and send her back to set things right, to secure Kira’s future. They load her up with her old suit and new, upgraded tools but warn her that it’s probably best to avoid her alternate self.

Yes, of course, the time line Alec created has its own Kira; who is visited by Future Alec who dumps a lot of information on her. Which lets them capture Lucas and secure the time travel device but also confuses Kira as to how exactly Future Alec knows this. Yes more changing of the time line.

As for other changes – well revealing Escher as a threat to Kellog got Kellog moving – to have Escher killed and use Emily as the killer. Well, that was an unexpected consequence.

Freelancer Kira arrives in her escape pod – in the middle of the Freelancer base where we see a living Garza in her cell. Kira releases her and tells her the way out, this time Kira is the distraction. Garza escapes and Kira happily surrenders to the Freelancers. She’s taken to Catherine where Freelancer Kira introduces herself – and shows Catherine her new between-the-fingers-Freelancer-tattoos. Kira reveals the 2 Alec Sadlers and that Kira needs to ensure the one that brings about the future they want survives…

The other? Not so much.

Future Alex is gathering his resources to, he thinks, run to Thailand with Emily – to find Kira’s body in his lab (Alternate Kira), a gunshot wound to her head. Which becomes really confusing when Freelancer Kira shows up.

Ok, yes, this could be interesting. The alternate time lines, battling to make the right one happen, Kira and Alec both trying to save their futures and loved ones and preserve different continuity. It’s a good story. It’s a good storyline

And if this were season 1 or even season 2 I’d buy it. If this were season 4 or 5 I’d buy it. But now? Now after finally revealing some clues about what Kira’s future involves, after exploring the dystopian nature and seeing what Liber8 were fighting, after the social media campaign over Betty? After all that Liber8 Now or One Future Our Way? NOW is not the time to put all of that on the backburner and introduce yet another plot line.

Are we going to return to the Liber8 vs Corporate Dictatorship storyline? Or is it relegated to the background?