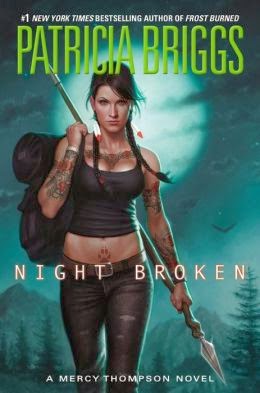 Mercy has faced many threats over the years. Vampires, werewolves, river monsters – but now she faces a new problem: Adam’s ex-wife Christy.

She is being stalked and hunted by someone who is more than willing to kill and destroy and has already hurt her. She has fled to the only people she knows can help – her ex-husband, the werewolf, and his pack.

But her stalker is far more than just a human who won’t let go – and the whole pack may be in danger.

I really liked this story – it was nicely balanced in terms of revelations and questions. The side plots fit in well, continuing the overall story without getting in the way – but also without feeling extraneous or irrelevant. They gave a nice sense that just because the main plot is happening doesn’t mean everything else in Mercy’s life is on hold – or everything else in the world is on hold. The vampires and the fae are still present, still edging into Mercys’ life, along with the human government and its hostility to supernaturals: they’re all present but this isn’t the focus of the book. It’s a nice balance to hit.

The big bad was very big and bad indeed and really did give over a good sense of his power while not being insurmountable or being oddly weakened to make him combatable. Sure there were a few “he’s just playing with us” scenes, but the true nature of the threat they were facing and the powers they had to call on to stand toe to toe with it really came through.

And the world building is well done – no wikipedia-like info dumping we’ve seen in the past. It also drew on an area of mythology I’ve never come across before, integrated well and called on some real world history to make it work on top of that. Excellently well done, in fact

And now for something horribly horribly wrong. Adam’s ex-wife Christy needs help, she is visiting and she is evil. Of course she is. The rest of the book has a long battle between Mercy and Christie full of lots of passive aggressive digs.

Let’s remember that this is a woman who’s boyfriend has been killed, her home destroyed and she badly beaten black and blue escaping an abuser and murderer and is now desperately seeking some kind of help and protection. But no, in among all these trauma she has time to make a play for Adam and play nasty little power plays on Mercy; though even her neutral gestures are seen through the most spiteful of lenses.

Her bruises? Give her “an advantage” because she can play for sympathy. When she cooks it’s clearly so she can prove she’s a domestic goddess far superior to Mercy (not cooking to try and be grateful for the help of course. And why everyone rhapsodises over a plate of sandwiches I do not know. Seriously the cooking quality of the area must be pretty damn poor if everyone flocks for BLTs). When Christy cries, it’s manipulation. When she’s sorry she’s brought trouble to their pack, it’s more manipulation. If ANYONE shows any degree of sympathy to the woman who has been beaten and stalked by a murderer, Mercy assumes it’s more of Christy’s manipulation rather than actual sympathy.

Of course, some are just unambiguous spite from Christy as well – there’s a battle over a stained table cloth, there’s a battle over where Christy’s make up and toiletries go (she puts them in Adam and Mercy’s en suite bathroom), whenever Mercy calls Adam she answers and refuses to put Adam on the phone. She tells lies to make people think Mercy is being mean to her.

I am actually in awe of how nasty Mercy is in this book.

All of this is watched by the three other women of the pack (because female werewolves are rare because REASONS! Female werewolves are ALWAYS rare, it’s a rule) who, naturally, pick sides and snipe and glare at each other, because women always fight and are “catty” right? Oh the men generally back Mercy (as right thinking folks) and repeatedly reassure Mercy while letting Christy have it (lots of “bitch” in there). And Mercy “jokes” about giving Christie to her abuser.

Even the few times when Mercy is nice to Christy (who Mercy describes as a “sweet helpless home maker”) – defending her to Jesse, for example – feel more like reminding us that Mercy is the one we’re supposed to root for in this fight rather than any genuine feeling on her part.

If there’s one advantage in all this it’s that Adam doesn’t have the chance to be his usual Hauptman self – but that may be because he’s usually SO extreme that even “lesser extreme” is seen as a let up. We do have references to how his “overprotectiveness” means he has to know where she is at all times and can’t do anything alone. Literally, there always has to be someone with Mercy now, every second, or he gets pissy (this is in addition to her being on CCTV so he can watch her at any time). Mercy also finds his lethal anger all kinds of sexy… because murderous rage is so hawwt guys. Oh and she has to be careful what she wears to sleep in because if someone wakes them up in the middle of the night in an emergency and she is not sufficiently clothed when running to address that

It’s sad because, past this, the story works. It’s a good story, it’s got some solid world building. We even have some solid minorities, Black werewolves (who really need more presence in the book because they just kind of lurk in the background), Latina contacts (with a sense of culture as well which is pretty well done – but does come with an edge of “oooh isn’t her English good!” Oh and some truly awful Latino gang members thrown in to remind us Adam is scary) and a Native American relative of Mercy’s (he’s not the best portrayal in terms of positivity, but even much of that is firmly placed in Coyote’s camp rather than on him himself, but he’s still a convict) even a greater sense of Mercy’s native roots and appearance. We have Kyle and Warren as gay men – and while there’s an unpleasant moment where the use of Kyle is pretty damn callous, the roles generally work with both acknowledgement and challenge of homophobia.

There are problems with the constant emphasis of how “flaming” Kyle is – and how Mercy seems more concerned with making sure people are comfortable around him than, y’know, being ready to tell them to screw themselves if they’re not. And if someone is uncomfortable being alone with Kyle then you don’t make accommodations for him, you kick him out! At very least make sure someone else plays host. Also Mercy’s likely bisexual brother’s “teasing” feels more like sexual predation when directed at other men since he focuses on a male victim of sexual assault and is apparently completely and utterly unable to read the fear he’s causing (which, given he’s a coyote with all the “smelling fear” and “detecting lies” they do all the time is… dubious).

None of these characters are huge, but they are present in a consistent, real way that we don’t see that often in the genre. But, yes, there’s still a lot of problems there - it’s also possible that the constant, horrendous Christy vs Mercy war grabs so much focus that the other badness fades away. It’s amazing how many “except” I kept coming up with when I’m trying to present a portrayal as slightly positive. But with every new thing, the train wreck just looms out of control. So – some of it’s right, some of it is well done – but a whole lot is a problem.

This is one of the books that is really hard to rate because there is so much about it I like – I like a lot in fact. I like the story, I love the world, I love how sideplots are both advancing the world, Mercy’s own story and Mercy’s relationships. And then there’s Christy and the marginalised people and Adam which leads to horrible crashing and burn and me restraining myself from throwing my tablet at the wall. It’s a nice piece of art – that someone has vomited on.