Revolution, Season 2, Episode 17: Why We Fight 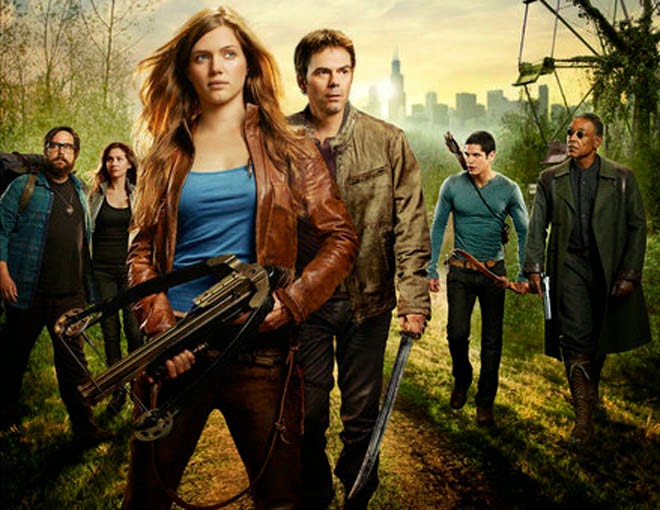 Miles, Monroe are spying on Patriot people doubtlessly up to something evil, and the kid Miles let go last week is back happily among them. Monroe perfects his “I told you so” look. Don’t let your enemy’s killbots go home! Of course, said killbot is now guiding the Patriot troops to their Camp (shall I call them The Resistance? Because the Resistance in ‘Allo ‘Allo was more efficient).

Gene decides to go to the town full of brainwashed Patriot people with their Killbot children so they can recruit more help. Rachel and Charlie volunteer to join him on their silly side trip but Miles insists on going instead. As is usual Sebastian moans but they do it anyway (hey, at least they’re finally DOING something).

They sneak into the town which looks vaguely like a Fallout New Vegas setting (in an awesome way. If you don’t get the reference you have lived a sad, deprived life, clearly) with lots of dramatic propaganda posters; his former friends are walking around like good little drones.

Neville, meanwhile, is manipulating the not-very-bright Truman to turn him against Doyle. When he leaves some of Doyle’s men have a message for him involving lots of punches to the face.

Gene and Miles find Marion in the bar she runs and Gene decides they can totally trust her – but they still end up kidnapping her because she believes they’re terrible terrorists. Truman has done a really good job of framing him as a terrorist. He takes a while trying to talk her round despite her being an old ex of his. Of course, her current boyfriend is actually Truman which may be why she’s so hard to convince (Miles “you really get around” comment is rather unnecessary – last I checked, 2 lovers may be more than we’ve seen Miles have. His tormenting of Gene is much more fun). And he’s come to dinner so they have to let her go talk to him and pretend everything is normal.

In response to his taunting, Gene asks why Miles is doing anything – why does he always think everything’s so bad. Miles has a simple answer – it’s the apocalypse – and a more complex one; he tried to make things better with Monroe. It didn’t turn out well – because people will always be stupid and selfish.

I can’t say I disagree. Gene rightly points out Miles isn’t fighting for anything, he’s just fighting his own demons.

Marion asks Truman about Kim and Grant and his answers make her suspicious and lean towards believing Gene.

At the Resistance camp, Charlie and Connor snark a bit before the whole gang finds something else to go spy on. It’s a camp full of Duncan Page’s men – the Patriots found poor Duncan and now she’s dead and her men want some vengeance. Thank gods for random events giving them an army, because standing around bickering was surprisingly ineffective for defeating the Patriots. The Patriots are rampaging across the Plains Nation, destroying the War Clans (and he makes lots and lots of Native American analogies, in case you missed them with the Plains Nation).

With his army, Monroe gathers everyone up and prepares to hit the boot camp – including the Killbot Cadets. Charlie goes with (since her men are going) while Rachel tries and fails to get everyone to stop.

Neville wakes up tied to a chair next to Jason who is similarly restrained. Doyle arrives to gloat over exposing Neville’s plan to murder him. Neville responds with vicious taunting so Doyles shows him that Jason is a Killbot – that revealed he starts strangling Neville with a belt because it’s slow and gives the plot chance to distract him before Neville actually dies – and sure enough we hear gunfire.

It’s Monroe’s attack – and that gives Neville chance to get free and beat up Doyle. It’s Neville’s turn to do the strangling – and he doesn’t stop. Bye Doyle – he was set up as an enemy of Neville and Julia you knew he wasn’t going to last long. Jason’s worried about being a Killbot, Neville has no time for angst – time to move.

The camp is taken and Monroe walks around killing any wounded, watched by Charlie and Connor, Charlie pointing out Monroe’s ruthlessness to Connor as something he should find disturbing. (Connor came from a place where they whipped people to death – I call shenanigans if his dad being ruthless disturbs him). All but 4 of the cadets are dead and they find a notebook in Doyle’s office in Arabic.

In town Truman and Marion finish eating and Miles and Gene can talk to her again, she’s come to believe them. But extra angst – Marion is engaged to Truman. She just wants them to leave so she can go back to hoping everything’s fine; but she didn’t turn them in at least.

But when she and Truman go out they find the survivors from the camp, weeping and horrified at the massacre Monroe unleashed. She turns in Gene and Miles and we have another fight scene. As they leave Marion shouts to give them away – after telling them that their people did something awful.

At the camp, Rachel confronts Charlie to guilt her about killing the Kiddy Killbots. Charlie isn’t bothered and Rachel has a guilt moment because she believes her and Miles’s actions have shaped Charlie into a weapon, a soldier. Rachel wants the 22 year old Charlie to have a future – but she doesn’t see the point.

Miles and Gene return to the Resistance, Gene injured with a bullet wound. And Miles chews Monroe out for the attack; Monroe throws his words back at him – people do stupid selfish things and Miles can’t rely on the town for help. He wants Miles to join him fighting the Patriots but before Miles answers they get a translation on the Arabic book they found – the cadets are being used to assassinate the President of Texas.

Ok, while I can see more than a few moral qualms about killing the underaged child soldiers, even if they have become killbots, I also think that we need an answer to this “what are you fighting for?” everyone keeps asking, because I’d really like to know

We know what Monroe is fighting for, but everyone else? What is their goal in fighting the Patriots?

Suppose Gene’s dubious plan had worked (and it hadn’t – even before the massacre happened even his ex-girlfriend could offer him, at best, not turning him in. It’s not like rallying support would have worked) what did they intend to do with the towns people if they had rallied round? Have everyone sign a petition requesting the Patriots leave? Turn them into an army – in which case to do what? Did they actually have a tactic for the Killbot kids over than leaving them alone because they’re kids?

They’re a resistance movement whose entire resistance is summed up by “not getting caught”. That’s not resistance, that’s being fugitives – in which case there’s absolutely no point in being in Willoughby at all. So why are they there?

This is the problem with this season of Revolution, no-one knows what they’re doing. And, sure, that can work if we’re going to show some people desperate to survive and learn (it worked with Aaron and Priscilla doing just that), but Miles, Monroe, Rachel and Charlie don’t act like people trying to survive and learn in a world gone mad. They act like, they talk like, a resistance movement that doesn’t actually do much in the way of resisting.