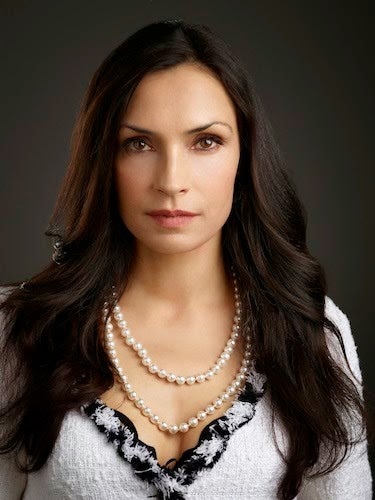 At the end of the first season of Hemlock Grove, we noted that there were many problems with the way the show dealt with marginalised people - and that definitely included women.

In season 1 we saw a lot of dead women. Letha, Brook, Lisa (and the other victims of the serial killer), Charlotte (the villain), Clementine. Even Olivia and Shelly were dead or missing at the end, though they made a return. The only thing matching the sheer scale of the female body count was the demonisation of female sexuality - from constant sexually misogynist insults to the serial killer that expressly targets women because she disapproves of their sex lives. All of this sexual shaming is topped off with a gratuitous rape scene when Roman decides to take out his angst on Ashley

With that as the foundation, season 2 was something to be approached with worry.

Season 2 didn’t bring us quite the same level of female death we expected - at least, not the blanket death that tore through the first season. Instead we have a pervasive commentary on what it means to be a good woman, a woman’s roles and a whole lot of women in service to or existing to help men.

Olivia spends most of this season seeking redemption. But part of that, to take a direct quote from Olivia, is being a “better woman” and a “better girlfriend” and “better mother.” To be a better woman, Olivia frames this in relation to her family; it’s not about being a better person, it’s about being more pleasant and useful to other people (predominantly men). Now, Olivia does have a lot to redeem herself of and she also has a whole lot to make right with people she has treated terribly for so long – Norman, Roman and Shelly among them. In that light, I can see why Olivia’s wanting to be a “better woman” involves serving, helping and generally being nicer to other people – it’s less about being a better woman and more about her own quest for redemption as she gets in touch with her empathy
But it sits unpleasantly with the depiction of womanhood not just in wider society (where women are presented as lynchpins in other people’s lives – even calls to respect women often come with “she’s someone’s wife/mother/daughter/sister” rather than invoking her own personhood) but also in this season – women in this show are generally servile, evil or both.
Look at Olivia – her whole storyline this season has been the consequences of her being a bad person last season – her selfishness has been punished by depowering, weakness, and even a creeping death as well as the scorn of all she cared about. She’s spent the whole season trying to redeem herself by seeking this selfless, serving ideal. From the strong woman she once was, she’s now rather defined by her family – Norman, Roman and Shelly – Shelly’s sweet forgiveness, Roman’s hatred and Norman’s scorn.
Contrast that with the other “villainous” woman in this season - Dr. Zheleznova-Burdukovskaya, strong, ambitious, intelligent – and desperately seeking agency. And failing. She doesn’t even start in open rebellion to Johann Pryce, chief scientist of the White Tower, she merely seeks to be respected as the capable scientist she is (the reason why he brought her on board after all). But no amount of overture gets her any respect or explanation of the demands put on her. She’s constantly put in her place by Johann who treats like a lab assistant and resorts to more and more “defiant” means to escape his influence. Finally her attempts to assert herself and gain power and freedom (however evil) are punished with death. Her attempts to be other than servile get her killed


And on the “good-guy” side? We have Miranda – drops into town, develops the miracle milk and is quickly drafted in as unpaid nurse maid for baby Nadia. Beyond sex and lots and lots of breast examination, that is her role in the plot. She is a milk dispenser. Whatever her life was before is now entirely subsumed into Nadia; I wish I could say more but this really is the sum totality of Miranda’s plot line - she arrives, she becomes a wet nurse and occasional sex partner.
Destiny, Peter’s cousin, isn’t a wet nurse - but she’s still a servant. She is the seer, constantly worried and looking out for Peter and ready to undergo deeply unpleasant and dangerous rituals to see the future and offer him advice that he will then ignore. Even her brief fling with Andreus was just that – brief, background noise (and seemed more to be a way to have Andreus there offering Peter advice and homoerotic subtext than to be about her).
Prycilla literally exists to be a body Shelly can move into – sacrifice and service. Johann created her and he destroys her mind. Her whole existence is to be a vessel.

Which leads us to Shelly; Shelly is a character with a lot of growth but she’s also, by sheer character, the epitome of an “ideal” serving, self-sacrificing woman except in one respect (her appearance). She’s sweet, she’s kind, she worries about others she is injured saving Jason, a child she meets while in hiding, risks exposure for him. She even worries about Prycilla having her mind wiped and is the only one who believes Olivia’s redemption. She is adored and loved by everyone who know her because she IS that ideal. She is this sweet, gentle, caring, generally passive (except when it comes to helping others) beautiful person. She is the paragon against which all the other characters are compared – and found wanting; she’s the ideal they cannot reach. Even though she does have some beautiful scenes and characterisation this season she is also, in some ways, an abstract – the diamond surrounded by dross – more than an involved character in her own right. And part of that beautiful ideal she represents is that she doesn’t have a lot of personal agency for her own goals – even claiming Prycilla’s body is something Johann pushed and manipulated her into rather than something she, herself, sought.
This paragon also leads into a lot of ableism since the one “flaw” with the perfect, amazing, gentle Shelly is how she looks. That is what Olivia always focused on, it’s the feature that she sees as defining her and ultimately leads to Johann making a pretty copy and killing Shelly (albeit to resuscitated).

Even Pryshelly’s death stands as a stark marker of Olivia failing to reach the ideals epitomised by her daughter, Olivia relapsing back to villainhood because she can’t walk the pure path.

With this collection, Letitia and Anna are actually something of a relief. Yes, they’re both employees but at least they’re paid to be servants and to care about other people’s problems rather than just assuming the role out of some kind of noble duty. But even then both of them go way above and beyond what is asked of them, Letitia breaking the law and following investigations beyond what Norman asked to save him from Olivia (and not even accepting a pay off from him). And Anna goes way above and beyond what any housekeeper should be expected to tolerate.

Women as service or adjutants is a major problem in this season, but it isn’t without other problematic elements when it comes to gender. Like the first season (though not as pronounced) there are a number of dead women - Pryshelly, Prycilla, Dr. Zheleznova-Burdukovskaya and Marie (Norman’s ex-wife) - who, again, didn’t seem to have a role except to add to Norman’s character and his revelations about Olivia - she was less of a character than she was a motivation for Norman. At the same time Martin spends the whole season carrying his sister Clementine's corpse as his motivation.

There’s also a classic disparity of nudity as well. While we definitely saw Peter naked a few times in the context of his shapeshifting, it was nothing like the close and detailed attention paid to Miranda’s breasts. But there’s also a problem with what is shown. This show is willing to show any amount of blood and gore, we have seen faces ripped off, body parts everywhere, blood splattered over everything. This season has shown every angle of Miranda’s breasts in close up. This show has shown a graphic rape last season and was quite happy to show that - and Roman having consensual sex as well. But Miranda instigating a threesome with 2 guys? A woman being sexually proactive? Two guys in the same bed? Oh hell no - fade to black time! Save our innocent eyes from this horror!

Top all of this off with classic female hostility. Destiny and Miranda hate each other (with Destiny assuming the worst and deciding she has to run to Peter’s defence), Anna and Miranda hate each other. Olivia and Marie hate each other. Even Letitia seems to grow to hate and obsess over Olivia. The closest we get to female collaboration is Dr. Zheleznova-Burdukovskaya trying to plot with Olivia - and the emphasis is trying since Olivia didn’t seem to even try to help her (nor do much with the information the doctor got for her).

Let's finish on Lynda - or the convoluted excuse to get Peter back to Hemlock Grove. She's arrested, she's held there for some unknown reason and then she's quietly shuffled out of everyone's way by the fourth episode. She has no plot line, she's not a person. she's a distraction - she's Peter's motivation and he doesn't even focus on her for more than 5 minutes.

This is the second series and the treatment of women have most certainly not improved - it’s another layer of terrible tropes dropped on the already appalling foundations of the first series.
Posted by Sparky at 9:00 AM