Hemlock Grove - So Many Problems 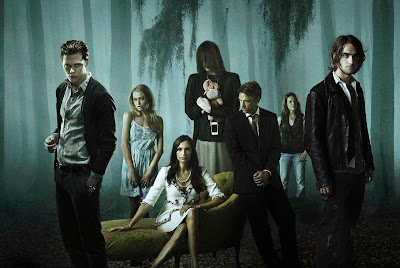 Hemlock Grove is the new webseries produced by Netflix; the second series Netflix has produced in this fashion. Despite low expectations, Netflix’s previous webseries, was surprisingly decent - greatly raising the bar for Hemlock Grove. We tuned in hoping for something really good.

There is so much to complain about regarding this show that we envisioned a full series of posts on the myriad fails but, being a webseries, they would quickly become irrelevant unless the worst should happen and a second season actually be produced (gods preserve us). So we’re left with one post on the many reasons this show became only slightly more amusing than stabbing vinegar soaked toothpicks into our eyes.

We are a social justice site, and there are many social justice fails we can - and will - attack. But even before we get to them, Hemlock Grove was impressively awful even if it had perfect social justice credentials.
The acting was wooden, melodramatic and just plain awful. I rarely attack actors directly, but Bill Skarsgard has talented family, you’d think his father or brothers would give him some pointers.

The world building was clumsy as hell, with all kinds of myriad creatures introduced that are utterly irrelevant until the very last episode. Letha’s angel-pregnancy, the whole Upir family, the medical experiments, Shelly - all of it pretty irrelevant but the whole show is full of them.

And the story is so badly written - it’s clogged with irrelevancies that make no sense and add nothing - why did we have the man who saw visions? What did he add to the story? Roman and Peter’s shared dreams - was there actually a point to this or did I zone out waiting for the actors to actually convey some emotion? And how come this entire damn town is quite willing to believe that Peter is a WEREWOLF but absolutely no-one bats an eye at Roman mind controlling random people for funsies? I know Peter’s never had a friend but within minutes of knowing Roman he’s inviting him to come witness his change? Even the defeat of the big bad - Peter and Roman spend all series plotting against the Vargwolf and then a random third party, randomly appears and handles it with minimal effort?!

It was one of those shows that made me scream with frustration because it just made no sense, half the plot lines were irrelevant and all the actual pointful information was crammed in the last episode.

This alone would have made Hemlock Grove dire, utterly and completely dire. At best it's a poorly stitched together prequel to the story they actually wanted to tell, at worse the producers didn't realise that the "horror" element wasn't supposed to be our reaction at the awful writing and terrible acting.

But Hemlock Grove goes further in making us hate it by perpetuating all kinds of prejudice repeatedly, episode after episode.

There wasn’t a single episode of Hemlock Grove which didn’t have some sort of misogynist language.  Women were constantly referred to as bitches, skanks, and my personal favourite, “farm fresh cunt.”  What the hell does that even mean? It was so bad that if they made through an episode with only one slur being used I was shocked. Both sexes constantly engaged in this language and women seemed to be barely able to tolerate being in the same room together without snipping at each like a pack of wild jackals.

There were only two instances in which the misogyny was directly challenged:

When Tom Sworn heard his daughter referring to their classmate as a skank and a slut, he very directly told him that he didn’t like that kind of language.  The problem of course is that he didn’t explain why he found that language inappropriate.  In fact his tone was really no different than a parent who corrects a child for swearing.

These seem like really positive messages don’t they? The problem is that they are isolated incidents.  Letha’s sexuality was tightly controlled. Roman stopped the car when he found out that she was pregnant and then threatened violence against the father. Why? Because his precious Letha had been soiled, soiled I tell you. To make sure we got the message that Letha’s body was under the control of her male relatives, when Roman realises that she is having a relationship with Peter, he decides to rape a woman. If he couldn’t control her, then he was going to control and have power over someone else. There are absolutely no consequences from Roman raping Ashley Valentine. He simply erases the memory and the entire crime against her is invalidated. To make matter worse when he goes into a coma, she creates a get better card for him and Letha comments that this effort is proof that she has a soul.

Then there was the violence. Hemlock Grove is about a werewolf who is sick, kills and does not eat the meat. Interestingly enough, for some reason this supposedly rabid werewolf only kills women: Brooke, Lisa, and the sworn girls died this way. The writers didn’t even try and make the choices random and instead this young women were killed because the Vargwulf didn’t like their sexual choices. Yes, you read that right. Letha was targetted because she was with Peter and the twins because of their lost virginity and the peer pressure that produced. Better keep your legs crossed ladies or the furious werewolf will get you!

At the end of the show most of the women are dead or, in one case, missing - if not at the hands of the Vargwulf then from other causes. Lynda and Destiny are the only ones that managed to get out of this mess alive and present with Letha and Olivia quickly jumping on the big pile o’female bodies in the last episode.

Which leads us to the lesbians, the show’s GBLT inclusion. Firstly there was Brooke, having an affair with a teacher who was the first werewolf victim. Remember her? Well she wasn’t exactly memorable, she was more talked about than anything else. She existed to die and motivate everyone else - in other words, she was fridged and we never even got to see her with her lover, have any kind of relationship or, indeed any kind of life

Which brings us to Clementine, who could have been an interesting character. A tough character, an involved character, an investigator with skilled and insight and a driving passion while at the same time being torn over her faith and role with her signature line “god doesn’t want us to be happy, he wants us to be strong.” That could be a comment about a lesbian chaining herself to service to the homophobic Catholic church - even her St Jude, amulet to lost causes. But none of this is developed, her romantic life includes a woman she blew off on the first time we saw her and then her encounter with Destiny the prostitute. All her investigation adds up to nothing, she follows people around, investigates and then runs into Olivia and dies. She doesn’t appreciably add to the investigation, she doesn’t even get in Peter and Roman’s way sufficiently to be an antagonist. In the end she dies and becomes motivation for her brother for a possible second season - that would be a fridge.

Destiny’s own sexuality remains rather in the dark since the only sex or sexual desire we saw was when she was paid to have sex.

Then there’s the treatment of race - Johann the evil Asian scientist is, well, evil and sinister and pretty pointless. Clementine we’ve covered with her tortured toughness and eventual death - she had lots of backstory at least, but it didn't really go anywhere, and Ashley existed to be raped by Peter and disdained by her peers.

From which we have to touch on the Roma characters and boy is there a lot here.

Firstly, the actors playing Peter and Lynda are not Roma. It is always problematic to use people who aren’t part of an ethnic group to play that ethnicity; it’s not like there are no Roma actors.

There is an enormous amount of anti-Roma prejudice on the show - constantly using the word “Gypsy” and referring to them as trash and scum. The only time this is challenged is by a Black side character who goes on to make a weak stab at the silliness of “political correctness”. Because having a POC dismissing it would make it better? I don’t think an episode went by without some antiziganism of some kind. And even though I don’t think they were presenting it as good, nor did they go out of their way to challenge it.

Nor did Peter, Lynda or Destiny challenge the stereotypes themselves. Almost as soon as we’re introduced to Peter, he’s stealing a jacket with the full blessing of his mother who carried a tag-remover for that very purpose. They’re transient. Destiny is a prostitute and a con-artist (who has woo-woo but still cons people about woo-woo she doesn't have). Lynda apparently sells drugs (or really good optrex). Travelling, drug dealing thieves - it’s like a bingo card of negative stereotypes. Top that off with a whole load of woo-woo and you may as well have put them in wooden caravans asking to have their palms crossed with silver before stealing children.

Even people who were supposed to be friendly with Peter continually ask him about “his people” and how “his people” did things or made random comments about “you people.” Barely a sentence went by without someone othering Peter. Of course, while presented as so completely other, we see little in the way of Roma tradition or culture with either of them, it’s a label attached to explain their “otherness”, their woo-woo, not an attempt at a real portrayal.


It was almost impressive how many problematic issues were rammed into one season of Hemlock Grove. Without it, I would have been bored to tears watching it, confused by the convoluted plots and maybe amused by the sheer awful acting and terrible dialogue. But then heavy loads of isms were added on top of that turning a mess of a show into an utter hot mess. We will not be looking forward to a second season.
Posted by Sparky at 9:00 AM