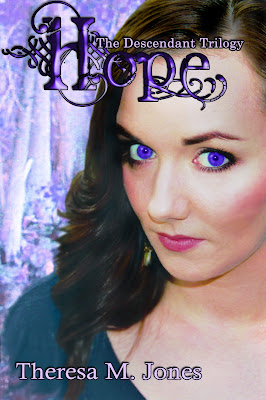 Allison now understands who she is and where she comes from, but will it be enough to save the world? She went through a dangerous journey, dragging her young daughter along for the ride, in an attempt to stop the evil Rising Leader, Damien, from opening the Seven Seals and bringing about the Apocalypse.

But she hasn’t succeeded yet. The Rising still thrives and Lilith has made it her mission to open the remaining Seals so that she and her minions can rule the Earth.

David and Allison hope that love can conquer all, but in reality, love is never enough. Will they, along with the rest of the gang back at the Compound, be able to stop the Rising?

And where is The Descendant that is prophesied to save them all?

I greet this book with frustration. I read the first book and thought it had a lot of potential but needed a lot of polish. Aside from polish, the world was interesting if it were developed and realised. I hoped we’d see this world and the plot rage forwards now we had passed the introductory first book. I expected epic battles and calamities with the whole world riding in the balance

I didn’t expect 100 pages of a 200 page book to be taken up by a wedding and a honeymoon. Ok, as far as weddings and honeymoons went, it was pretty, it was well done, it was touching and emotional and one of the better I’ve seen.

And into this world the 2 most powerful forces for good on the planet have a holiday and party. And feast. Only 2 of their meals are described but they’re both ridiculously over abundant and this is during a famine folks. Coupled with their general not doing anything , spending an age on a party and a holiday and the good guys in this world resemble Nero playing away while Rome burns. In theory there are things going on in the background, but we never see that – and the 2 most powerful beings in the world are not involved until the very end.

This really ruins the book for me and no matter how fun or light or happy the romance and the children are, the mere fact they’re doing so little while the world falls apart feels so dreadfully self-absorbed. What is the actual point of the Order if they do so little to counter the Rising? What is the point of the Order if it sits on its hands while the world collapses?

The only real activity that relates to the world that we see until the very end of the book is from the evil side. Lillith plots and acts and schemes and actually works towards her goals rather than sitting around and being sad about them. But here the writing trips me again because Lillith is so ridiculously melodramatic in a way that goes even beyond the first book. Worse, her internal voice sounds like a petulant teenager and the worst kind of melodramatic supervillain combined.

I was also frustrated that too many of the characters acted clueless for the sake of story surprises. Only the surprise wasn’t surprising to a reader because it was so heavily foreshadowed and blatantly obvious.

No-one pointed out who the Descendant Chosen One, descended from all 9 of the Primitus would be. It’s not Allison, because she’s only descended from 6. And she’s now married to David, also descended from 7. It’s bemusing that they never thought to sit down, compare ancestors and realise they had all 9 between them. Even if they didn’t name names – David already showed 2 powers that we know Allison doesn’t have: healing and the ability to teach with a touch as well as showing Castafonda’s holy virginity thing. From the last book we know David has the 3 Primitus ancestors Allison doesn’t – so why the question of who the chosen one will be and how it could happen?  Do we need to have a Birds and the Bees conversation here? Why isn’t anyone in the book, especially David and Allison, cluing in to the fact their child would be the one? Especially after they both got the holy angel “you will raise the chosen one” dream. I expected Michael to zoom in with full angelic glory and yell “for god’s sake people – you are knocked up with the chosen one!” and throw a pregnancy test at her before stomping off in a huff and buying the Metatron a drink for having to deal with these dense humans all the damn time.

And then there’s Lillith; a woman who feels nauseous and dizzy and irritable and has tender, sore breasts – oh and has missed her periods for several months. What could ever be wrong with her? Call Michael and his holy pregnancy tests again please

Diversitywise we had some more POC – relatively minor roles in the Order, though there were several and some at the very highest echelons. And Lillith had both a Black second in command and several POC underlings. There are still no GBLT people. And I’m still not keen on the whole virtuous virginity thing from Castafonda that was in the first book. Especially since Allison openly thinks about “living in sin” before she was married.

In all, I had more hope for this book, building on the foundation of the first book. And it wasn’t realised, it didn’t deliver. The romance went from being interesting and novel to all encompassing, the interesting world and epic conflict was heavily pushed onto the back shelves. The sheer disconnect between what the Order is for, what it was created for, and their inactivity this book added to the clumsy writing to really ruin this book for me.