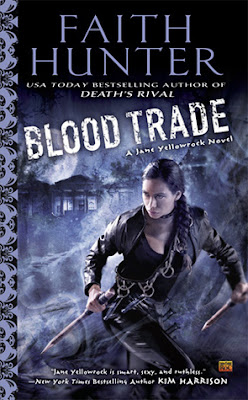 Jane Yellowrock is still reeling from the bond that Leo forced on her, depressed, lost and apathetic and afraid even to shift for fear that Beast would go running to Leo, she needs a distraction. So a call to Natchez to kill Naturaleza vampires sounds like the best thing.

There’s some politics to play what with Leo and the master of Natchez being officially annoyed with each other and lots of dancing from that, but Jane handles it with her normal blunt force approach.

Except these vampires are worse than your usual Naturaleza. They’re faster, tougher – and nearly immune to silver. And they’re changing into something else, something insectile. This is an entirely new threat and one more lethal and disturbing than most she has faced – something that goes back to the very core of the vampires’ creation.

That and the increasing body count – over 100 missing and dead humans – means having to call in the government agency, PsyLed, which means calling in Ricky which means, along with Bruiser, Leo’s second showing up, Jane also has to deal with her rocky emotions over her personal life.

This is one of those hard reviews to right because so much is done well that it creates an excellent book. But the things that were more shaky are things I can write much more about

Which means I end up reducing the excellently well written plot, with all the descriptions giving me just enough information to see the scene vividly without it being bogged down, the well paced fight scenes full of drama and excitement, the emotional quandaries that carry all of the feeling with none of the excessive angst – to a single sentence of “it was well paced”. Followed by several paragraphs of what I think the book did wrong giving the end impression of my not liking the book, which couldn’t’ be further from the truth.

The book is really well written. Everything is largely balanced well. Jane has personal, emotional conflicts, her depression over the actions in the last book are really well conveyed through her apathy and tiredness far more so than by her sitting in a corner and wailing. Her relationship with Eli and the Kid is shown really well, again without lots of excessive telling, just the way they bounce off each other shows this developing family.

Jane herself is a complicated character, her balancing of her spirituality and morality with her complex belief system, history and profession is deep and interesting. Even as she hardens after the events of the last few books, she still holds onto her morality and the guilt that clings to her. I love the  Her interactions with Beast are excellent and I love that Beast is more than just a raging hungry monster – Beast is maternal, Beast wants kits, Beast can be guaranteed to shred anyone and anything in defence of children.

I loved her reconciliation with Evan because it was all it should have been – perhaps a little too perfect and pat because of that. But I loved it, I loved that Jane was sad about what happened but absolutely refused to take any more blame for shit that wasn’t her fault. In a genre that is full of heroines nailing themselves to crosses for everything that goes wrong, it’s refreshing to see Jane standing there saying “yeah, that’s sad – but it’s not my fault” and rejecting Evan’s blame – AND insisting he own his own faults. Jane has been beating herself up about Molly for a long time and it was a relief to finally have this resolved not with Jane being forgiven but with Jane refusing to be a scapegoat.

The story itself is excellent, it draws upon all the vampire lore that has been developed over the series and makes it relevant rather than just backstory.  It also helped really nail down the different kinds of vampires out there and their relative strengths and weaknesses finally in a defined form. It is a twisty mystery with more than a few surprises. There are, perhaps, more combat scenes than are necessary next to balancing exposition, but they’re really well written so it does work. We have some great side plots that fit well with the overarching main story including a nice lens into Jane’s own past and childhood. They aren’t a distraction, not even the old woman deciding to go vampire hunting – and all really fit together well.

There’s a moment towards the latter end of the middle of this book that gets a bit flabby for me. I feel like they run around chasing vampires to kill but don’t really do much investigating or get much in the way of answers; we just run from one lot of dead spidey vamps to another. It was also the point when I started to get frustrated because she didn’t seem to be updating anyone, talking to anyone. Telling anyone that things are far far different from what she expected or doing any real research beyond setting the Kid to perform minor miracles. It’s only a brief directionless moment but it’s there.

My second dislike should probably be better labelled as love/hate. Jane’s romance. She keeps doing things in the romance that I hate and then turning round and skewering all those things with challenges. But I do hate that Jane’s mind is reduced to mush when one of her love interests arrives on the scene. If Jane were spying on you, I think the easiest way to have a private conversation would be to mention Bruiser or Ricky then talk quickly while she inevitably zones out. I hate that Rick is running around attacking people because they dare to touch Jane and she’s HIS woman because his leopard believes she’s his mate. His leopard?! Y’know this trope makes no damn sense when it’s a werewolf doing it, but at least wolves form long term mating bonds. His leopard’s mate? His solitary leopard that meets a female briefly for quick sex then disappears again? That leopard is forming jealous mating bonds?  And I hate that she’s jealous and angry with Soul and with a woman Ricky talks to on the phone because there’s another woman close to her man.

Yet… yet for all the ridiculous leopard mating, Beast is quite happy to consider both Bruiser and Ricky hers because she’s a Mountain Lion and she doesn’t mate for life and doesn’t see why she can’t have them consecutively and why she can’t consider them both hers. Ricky attacks violently, then realises how out of line he is and even while using his leopard as an excuse, he apologises. Jane is jealous of Soul but tries to work through it and fight it because she knows she’s being childish and unfair and wrong and the two develop a level of communication and respect. She tells the flexing and posturing Bruiser and Ricky how unromantic jealousy is and Sylvia recognises her own schoolyard jealousy over Eli and how silly she sounds. So we get all these annoying tropes – and then every last one challenged.

What I will be looking for next book is not just Jane breaking the bond with Leo established last book, but some consequences for that. I feel that this was put on pause this book because she got out of town, but there’s a missing element of anger towards Leo that worries me. She was angry with Bruiser, but that was dealt with and it was more sad and betrayed than enraged. I want to see some rage over what Leo did.

This book has a large number of POC. Jane is, of course, Native American, Eli and the Kid are mixed- race Black people and we have an Asian villain. What’s interesting and pretty rare is that the core group – Jane, Eli and the Kid are all POC (albeit, in the latter cases you have to have read previous books to realise they are). Also, in a genre that constantly romanticises the ex-confederacy states, Jane Yellowrock casts a refreshingly harsh gaze over everything. She doesn’t think “oooh what a romantic antebellum home” she thinks “old slave era plantation”. She doesn’t marvel at the town that is long preserved, she remembers what this river port was used for. She never forgets the history of the ground she’s on – both in terms of slavery and in terms of the Native American genocide.

I do wish there had been more development of her Cherokee history which has been one of the more wonderful elements of the series and was sad that Agie One-Feather didn’t appear in this book. I was more irritated as well that the one Native American elder that did show up seemed to be a magical guide with extra cryptic woo-woo.

There were no GBLT character sin the book, though some of the dead villains were posthumously revealed to be lesbians or bisexual women (we never saw them alive). And for some bizarre reason Eli decided that this is inappropriate to talk about in front of ladies (personally I think being a lesbian is, by definition, a female topic. In fact, I’d be hard pressed to think of any topic that is more female). I think this is supposed to match up with them all trying not to swear in front of Jane (which isn’t as patronising as it sounds since Jane has expressed her dislike of swearing) but to count mentioning 2 women in a relationship as on par with swearing? That kind of treating GBLT people as taboo is really homophobic. Oh and there was a priest who learned to be a more tolerant person after driving his lesbian daughter away never to hear from her again. So no GBLT people, but learning moments of straight people it seems. We do have plenty of calling out of ridiculous homophobia, but a glaring lack of GBLT people that sits poorly with the series record.

We do have a developmentally disabled man, an old school friend of Jane’s who is interesting. He does have woo-woo and fits many of the tropes of disabled people with special powers; but at the same time he also has a level of agency and choice. He helps because he chooses to, when Jane tries to stop him, he refuses and he himself makes brave decisions to accept pain and fight to help save his friends. He’ more than just a tool.

In general, this is a good book, perhaps even a great book. I’m torn between a 3.5 and a 4 on this one, I want to go for a 3.8 or 3.9; there were things I wanted developed more and it there was a slowness in the middle, but generally this was an excellent book that I had no problem reading cover to cover. It was a book that, when it ended, I reached out for the next book and was disappointed that I have another wait ahead of me.