Requiem for Blood by Alexandra Hope 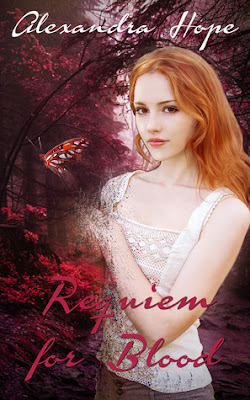 Olivia grew up in a cult – a cult lead by her mother, Mar, and is dedicated to becoming vampires. Subsisting nearly entirely on a diet of human blood, they enjoy many advantages, but the final goal of changing and becoming a true vampire still eludes them, they need that one last key.

Olivia and her friend have many doubts about the lifestyle the cult espouses and even more trouble with the daily life and the combat regime until Olivia finally reaches her 17th birthday and her rite of passage- hunting a human.

Which is when Erika the Kitsune gets involved, Olivia achieves her cult’s goal, bodies start dropping and she’s briefly reunited with her estranged sister and her compelling fiancé. Then more bodies start hitting the ground and it’s a very steep learning curve.

This book has a really unique premise and world setting – which is always refreshing to see and doubly so with any book about vampires. There are so many vampire books out there that someone could write a book with vampire were platypus which cruelly beak their victims to death and it’s probably already been done 3 times.

So to mix up the kitsune and the vampires, to have this unique origin story and this truly odd concept of a human vampire cult, surviving on drinking blood and slowly developing minor vampire like abilities while seeking their end goal of finally finding a way to transform and you have a really unique concept.

This kept me reading the book for a long time because it was so refreshing and so imaginative.

But, in the end, I stopped at 70% and couldn’t go any further. Yes, I was defeated and this book became a DNF. There were several reasons – none of which would probably have defeated me on their own but together it was too much to tolerate

Firstly, the story. There isn’t really one. Olivia has her life in the setting of the blood cult. We have her struggles with accepting it, her worry about hurting and killing people coupled with loyalty for her mother. Then she goes on trip with her, meets her estranged sister, Alexa, and her fiancé Troy in a matter of supremely ridiculous coincidence then runs into Erika the Kitsune. Who promptly takes over. Before that there are odd storyline snippets – the school governor, Noah, the rivalry with the Mean Girl that are not developed don’t go anywhere and don’t seem to mean anything or have any real point.

From that point on, everything the characters do is because of Erika’s manipulations and orders for reasons unknown. And at 70% it was still reasons unknown. They trained with Erika because she said so. They stayed together because Erika said so. Olivia is a vampire because Erika made it so. Any revelations are made because Erika revealed it. It was a whole book of random events backed by a Deus Ex Machinae who wouldn’t go away and no actual development of the story, no reason for anything, no foundation for anything. At 70% I had absolutely no idea why anything in this book was happening beyond “Erika wants it to”. You can barely get away with that in a tabletop RPG let alone a novel.

Secondly, the writing is completely not to my taste. In fact I find it truly, horrendously awful and this nearly killed me in the very beginning. Actually I nearly DNFed it early simply because the opening chapters are so damn confused and mixed up and bewildering with random characters and an odd setting no-one even tries to explain that I was 5 seconds away from throwing it away as incomprehensible. The whole book is written in the third person but cleaving very closely to a character (so we know their thoughts). And that character changes. Completely at random, sometimes mid paragraph. There are times when I have absolutely no idea who has said a line let alone who is thinking what or who is feeling what. There’s immense info-dumps – vast, amazing info-dumps. Erika info-dumps, Olivia’s mother info-dumps. Olivia has dreams and “sudden memories that just come to her” that info-dump like a champion. Need something explaining? Let’s dredge up a random childhood memory for no good reason! Behold, infodump!

And there’s a lot of excess description. Someone changes their clothes? You will be told. In fact we always know what everyone is wearing. In detail. The book is a master of show AND tell – yes you can see someone’s angry by their facial expression but we need to duck into their head to be told that they’re angry as well. This goes throughout the book, there’s an assumption that the reader has the comprehension skills of a 2 year old so everything is explained in detail, nothing left to implication or assumption. And we have constant little details thrown in that add nothing but word count – people who stumble, what people think about a smile, a whole sentence used to describe an unkempt beard. When Olivia meets Troy she repeats her description of him 3 times, each over a paragraph long.

The writing is also really clumsily used to try and shoe-in points or make points that aren’t even in the text. We’re told Mar is charming after she says “a beautiful name for such a beautiful young woman” to the visiting school teacher who is inspecting them. This isn’t charming, it’s skeevy and inappropriate, it doesn’t matter how you label it. If you want Mar to seem charming then make her charming, don’t have another character (in a random POV shift) comment on her non-existent charm.

Or there’s this classic: the school admin has been randomly kidnapped, he’s tied up and Mar pulls out 2 bags of blood. We get this exchange:

“Is that blood?” he asked, terrified.
“Why ask such a question when you’ve clearly come to the conclusion on your own?”
Can she read minds? He thought.

What?! Why? WHY would you assume she could read minds? What about that sentence even remotely suggests mind reading ability? It doesn’t! I makes no sense at all! There is no way this man would think that. But, of course it then let’s Mar info-dump on how good she is at reading facial expressions.

This continues throughout the book. I just cannot stand the writing, and I’ve read some truly awfully written books

Thirdly, the characters are also really poorly developed and make little to no sense, which really adds badly to the poor writing. The way they are written just really makes it hard to see them as people.

Olivia – she has all these moral qualms about killing people and then goes on a killing rampage and doesn’t care. Then worries that her mother may have been killing people. Make a decision, does this vampire care about human life or not? She can’t be all worried about it when it’s a source of angst then be indifferent when we need to add to the conflict with Troy.

I don’t understand why her mother started on this bizarre cult path in the first place. It makes no sense that she would decide to randomly kidnap a school administrator either – they just passed the test, so why kidnap him and murder his assistant? You make a point of targeting people who won’t be missed and then decide to murder school board officials, at your own home, in the secretive cult compound they are investigating! They must have diaries, secretaries, organisations who knew exactly where they were going and why and it’s not like secretive blood cults are not going to be suspected anyway?! They wouldn’t even have to find the bodies – they just need to find your massive stashes of human blood and weapons! Or notice kids walking around with scars from said weapons!

Troy himself expresses his profound grief through temper tantrums and shocked screaming. Which isn’t really grief – it’s anger and shock. And he’s permashocked. Everytime something new is raised he’s shocked again. His grief seems more of a plot point than anything else and the dead character hasn’t been established enough for us to feel the grief of it. I also cannot imagine that a man could be betrothed to a woman and then have zero idea whether she has any religious beliefs. And he can’t be both surprised that his mother was Japanese and know she was born in Japan and had a Japanese surname. And why, if Alexa was so desperate to flee the cult, did she only make it as far as the neighbouring city?

Add to that there’s absolutely nothing likeable about any of them because there’s no real foundation to any of them. Olivia is a big bad of contradictions that, in addition to us spending most of our time in her head, is curiously emotionally null. People are killed willy-nilly and no-one cares except Troy – who adds it to his big stock of pouting moodiness. Am I supposed to be invested in these people? Because they could be bombed from orbit and I wouldn’t miss them.

Between these 3, I couldn’t. I was hating the book, skimming the book and counting the minutes until it was over. I made my tablet shot me how many pages I had left as some kind of count down to freedom – and at that point it’s time to stop reading.

A copy of this book was received from the author to review.
Posted by Sparky at 3:00 PM