George R. R. Martin's Poor Excuse for LGBT Erasure in A Song of Ice and Fire 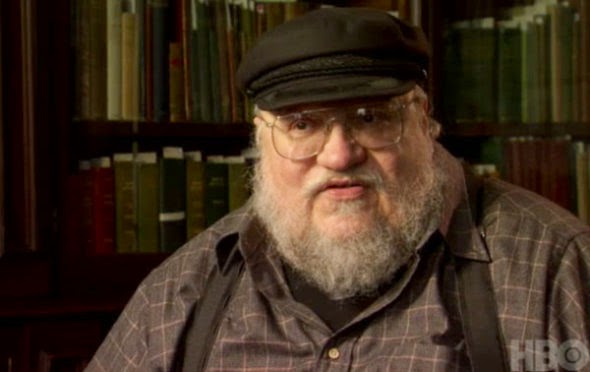 At the Edinburgh International Book Festival, George R R Martin, author of the Song of Ice and Fire Series (Game of Thrones) was asked about the lack of gay characters and intimate gay scenes in his books. This is his response:


He said the books are narrated through his "viewpoint" characters, so he was more limited than the TV shows. "Frankly, it is the way I prefer to write fiction because that is the way all of us experience life. You're seeing me from your viewpoint, you're not seeing what someone over here is seeing.


Because none of the viewpoint characters are gay, there are no explicit gay sex scenes in the early books. "A television show doesn't have those limitations," he said. "Will that change? It might. I've had letters from fans who want me to present particularly an explicit male sex scene – most of the letters come from women."


But he added: "I'm not going to do it just for the sake of doing it. If the plot lends itself to that, if one of my viewpoint characters is in a situation, then I'm not going to shy away from it, but you can't just insert things because everyone wants to see them.


"It is not a democracy. If it was a democracy, then Joffrey [the sadistic boy king] would have died much earlier than he did."

When we write fiction, we create a brand new world. The operative phrase in the previous sentence is “we create”.  A Song of Ice and Fire is most certainly an epic and unique world but it is a world created specifically by George R.R. Martin and as such, Martin is ultimately responsible for everything the characters say and do and for the world itself. To then suggest that explicit same sex scenes cannot happen because all of the characters are straight, ignores the fact that Martin created an all straight universe, thus  making the possibility of same sex interaction impossible in the first place. Martin is right, what he chooses to place on the page is not a democracy and thus he is solely responsible and is therefore open for critique. He can write whatever he wants - and what he wants is nothing but straight people and we can criticise him for that.

What is further disturbing is that Martin then goes on to add:

"I'm not going to do it just for the sake of doing it. If the plot lends itself to that, if one of my viewpoint characters is in a situation, then I'm not going to shy away from it, but you can't just insert things because everyone wants to see them.”

Since this series is from the beginning a creation of one person the plot was always malleable and the only limitations in actual existence were, and in fact are, the limitations of its creator.

Further, Martin suggests that this kind of inclusion boils down to fan service and given his tumultuous relationship with his fans, it would on first appearance justify his response. The problem is that we aren’t just talking about whether or not Joffrey should live or die but the inclusion of marginalised characters. This isn’t about throwing meat at overly demanding slashers but inclusion of a group of people who society actively oppresses, erases and frames as having a deviant sexuality. The more GLBT people are represented in the mainstream media alongside straight, cisgender people, the more we affirm that there is nothing inherently problematic or morally wrong about being a member of the alphabet soup.

This is why inclusion is so important and not something to be reduced to overly demanding fans, once again making unreasonable requests of George R.R. Martin, in attempt to reduce him to their “bitch” as it were. Including GLBT people is an imperative and moral good given the heterosexist society we live in. Sure, inclusion alone won’t change the bigotry of many, or the laws of the state but good inclusion (note: operative word here is “good.”), will have tangible social effects. At the very least, it could be one of the few series in which a young person could see themselves represented in a world which tells said person that they should not exist. Given the high rate of substance abuse, suicide and bullying, every social action which upholds and asserts the humanity of the TLBG community is important.

I also object fiercely to the idea that inserting an LGBT character would somehow be jarring or against the plot. What compelling reason does Martin have that every character in his book - all 10 squillion of them - have to be straight and cis? It must be a huge plot reason because it’s overwhelming! Why does the plot only lend itself to straight people? (And, again, we have to repeat that if the plot simply must have cis straight people that is, again, Martin’s choice). This is the pervasive, privileged hand of the societal default raising its ugly head. The idea that a cis, straight character is “neutral”, the base, default character is intensely dehumanising and an all too common excuse for erasure. GBLT people are people - not issues. It is possible to have LGBT characters without needing to have a “reason” for it. GBLT people do not need a reason to exist, LGBT people do not have to justify their presence. The presence of an LGBT character will not inherently make the story a “gay story” or need to be about “gay issues.” There’s no reason why we can’t have the story of a gay knight riding around Westeros without us then feeling we have to write the tale of the Knight who Came Out of the Closet and then dealt with AIDS.

No-one asks why a character has to be straight. No-one demands a justification for a cis presence. No-one considers straight characters gratuitous or unnecessary because cis, straight people’s existence is uncontested and not considered, at best, a novelty and at worse, a perversity.

I would also question this idea that he couldn’t possibly do more than innuendo and gossip to refer to a character’s sexuality if that character was not a viewpoint character. I know that Robert Baratheon is straight, and I’m pretty sure we didn’t see much from his viewpoint. Tywin Lannister, again, wasn’t a particularly major viewpoint character but I was pretty aware of his sexuality. I knew about Jaime’s sexuality before reading anything from his point of view. There are numerous men of the Night Watch going to brothels (the main and probably only pass-time in Westeros) who I’m fairly sure I never had a POV scene for.

To argue that sexuality would be impossible to depict without the the gay or bi character being  a point of view character is, frankly, ridiculous and patently untrue within the books themselves.

I know there is already someone rushing into the comment section to tell me how a gay character would keep their liaisons secret and would be closeted so there’s no way we’d notice their sexuality in the way we would with straight people. Stop - the only reason the closet exists and gay and bi people are more careful with revealing relationships and sexuality is because of homophobia. Westeros is not Earth, it’s not even very closely related to Earth. It has different religions, cultures and, of course dragons. If Westeros has the same homophobic pressures as Earth then that, again, is something Martin chose to do and, therefore, he cannot use it as an excuse. You cannot present something as inevitable when it’s entirely your creation.