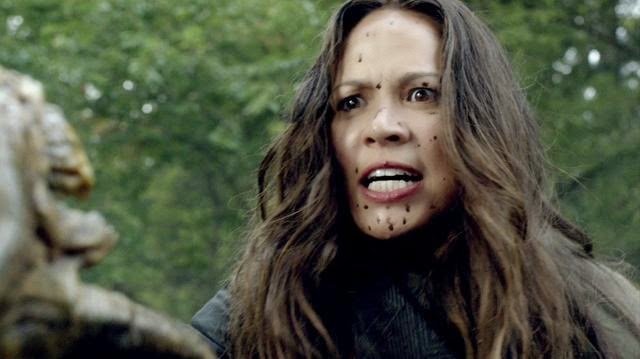 We have previously written about Race on Falling Skies back in 2012. Since then, Falling Skies has had several more seasons and the plot has, well, I’ll use the word “advanced” though possibly “drunkenly blundered around stomping all over it’s past canon” may be more accurate.
Among the many things on this show that have not got better, the depiction of POC is certainly one of them. In fact, the latest season of Falling Skies should probably have the subtitle: The Heroics of White Men and How People of Colour Screw Them Up. It’s a sadly prevailing theme that has permeated the season as the heroic leadership of the Masons keeps tripping over POC getting in their way, being helpless, being problems and making bad decisions - and paying for those bad decisions. After all, the Masons constantly make bad decisions but rarely do they face any repercussions for that and their foolishness is often presented as heroism (I bring up, again, Tom Mason’s little trip on alien ships which he has now repeated). The POC on the show don’t benefit from his plot warping


Take Anne Glass. Anne is the most prominent POC on the show and she’s certainly stepped beyond her role of lurking in the background, bandaging the wounded. But her new role as semi-leader (at least until Tom returned) has not been good for her. Her overwhelming obsession has been towards finding, protecting and saving Lexi, her daughter. That’s not necessarily a bad thing or an unrealistic motivation - but it is used as an excuse to remove all common sense from her character. When looking for Lexi her followers beg her to slow down as she’s driving them all to exhaustion - she even pushes herself so constantly that she forgets to eat and sleep and actually collapses. She’s emotional and out of control - attacking and killinga  Skitter and nearly killing Deni in the process (despite, as a doctor, probably having a better idea of the consequences of that than anyone else). She repeats that and badly hurts Ben when she attacks the Overlord - repeating exactly the same mistake a second time with other people being hurt because of it.. She isn’t effective, she’s driven and determined - but she isn’t sensible, she doesn’t really achieve anything and she puts herself and others in danger while she pursues her drive.


When they find Lexi, she is one of the most ardent defenders and champions of her, ignoring all evidence that Lexi may actually be a problem. Yes, this is something every Mason but Hal are also in on, but Anne is the most determined and the least willing to listen to reason. In fact, after Lexi comes out of the cocoon and kills Lourdes and after Ben follows Lexi and discovers she’s actually performing vicious, mutating experiments on humans, he and Tom both come to realise that Lexi is a dangerous threat. Anne does not. Anne continues to be focused on Lexi - and demands everyone else be as well, actually being angry with Tom because he’s not willing to throw away the lives of all of the survivors to chase after their daughter who they have overwhelming evidence is dangerous and a threat.


Tom supports Lexi but sees the truth and has the chance to change his mind, be cautious and be sensible. Anne does not - in fact, her continued blinkered faith in Lexi is an opportunity for Tom to show how sensible he is, to redeem his past mistake and do it by talking Anne down. Anne’s stubborn refusal to deal with reality is an opportunity for Tom to reassert why he’s a leader.


Of course, Anne isn’t the only or even the greatest champion of Lexi. That would go to Lourdes - Lourdes who continually thwarts Kadar, Maggie and Ben trying to reach Lexi and trying to bring some sense to the whole commune; yes, another WOC being the stubborn obstacle to the sensible white people plans! Her overwhelming, cultish loyalty to Lexi denies all sense and reason - to say nothing of actual sense, and is a constant problem to any of the characters trying to reason with Lexi. For being a roadblock to the white folks and unreasonably devoted beyond belief, Lourdes is rewarded with death. Alas, only Masons get to make such ridiculous decisions and survive them.


Matt was separated from most of the group in the beginning of the season, but even the youngest Mason had a WOC to get in his way and complicate things. In the Espheni Youth camp, Mira was short sighted. She thought resisting the Espheni meant open defiance (good decision making and intelligence are very much in short supply on this show) but Matt was there, good Mason leader that he is, to show her a better, more sensible way; keeping their heads down, pretending to comply while plotting their escape. Alas, Mira didn’t listen to him and her reckless and foolish actions got Matt into difficulty when he bravely took the blame to save her - again we have a White Mason being thwarted by a woman of colour and, again, we have him look more sensible and have his leadership established at her expense.


Of course, Mira does return later in the season - to betray Matt and get him and Anne shot.


Dingaan Botha is a new character and, unlike the Women of Colour in the story, he hasn’t been directly responsible for causing the white characters all kinds of problems. Indeed, when he first appears he offers expertise and resources they don’t have elsewhere - expertise that would be essential for getting Tom, Hal et al out of the “ghetto”. But even then, he could not be the unquestionable saviour of the moment. Tom had to repeatedly convince him to go along with the plan while Botha was reluctant. And when the time came to actually implement the plan, a random injury (except, of course, nothing in fiction is random) made it impossible for Botha to act and Pope stepped in and be the hero of the moment. Botha couldn’t be that hero
Botha then retreats very much to the back of the cast until he and Tom are buried with the damaged Beamer - and Tom spends a huge part of that episode having to reassure, chivie, inspire and generally be a Big Damn Hero to Botha who spends the whole episode cowering, panicking and despairing.


That is just this season - but previously seasons have not been much better. Ann spends season 3 obsessing about Lexi, hiding the fact she’s an evil mutant alien baby, and deciding to run off into the night with her - and get herself kidnapped. Which is where she spends the rest of the season, pretty much. Her actions have the rest of the Masons riding out after her rather than staying, working with the Volm protecting the people and even being the president - therefore denying everyone the rather dubious benefit of Tom’s leadership and the more precious benefit of Tom’s plot-armour
And who takes over from Tom? Marina. A WOC whose leadership skills were so poor I actually suspected she was the Espheni mole causing chaos through the survivors because I could think of no other justification for why she was so bad at her job. She ended up actually begging Weaver to let her keep the job
The actual mole, of course, was Lourdes - who caused more carnage and destruction among the humans than previous eye-wormed victims (including Tom and Hal, naturally). Really, when she died people must have been sighing with relief, not mourning.
This thread of POC being liabilities continues all the way back to the beginning of Falling Skies when we had the contrast between Ben and Rick. Ben faced ostracism for his spikes, but he helped in battle, embraced his abilities and became a real asset to the human forces. While Rick turned against humanity, identified with the aliens and fed information to the Espheni. Again and again we see the same contrast - even when you put white and POC people in the same situations the White characters emerge as heroes while the POC are, at best, incompetent and, at worst, an outright threat to humanity.


With this constant record of being a menace to the heroic leadership of white men on this show, Deni and Anthony are probably better off being barely remembered side characters moping around in the background.


We’ve seen a huge number of Dystopians where humanity’s future is inevitably protected by the cishet white man. But Falling Skies takes it to the next step - the white man is saving humanity and is being constantly hindered by bumbling, incompetent or dangerous POC who keep causing problems.
Posted by Sparky at 9:00 AM