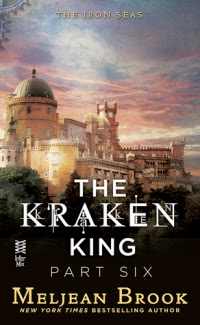 Zenobia and Ariq are stuck in the Red City as Ariq tries to negotiate Nipponese politics to try and gain access to the Empress and stop the devastation wrought by her war fleet; all used to try and force Ariq’s hand

While they are in the city the two become close, their relationship becomes public and Zenobia begins to understand what marriage to Ariq means

This is the first book of this episodic series that disappointed me and I wasn’t a big fan of. And it’s entirely down to that episodic nature. This is the book where Zenobia and Ariq get a lot closer, have sex and reaffirm their love a lot. And, as part of the main book if all these episodes are lined up it would work. As it is, this episode is overwhelmed by it, it takes up most of the book and doesn’t leave a lot of room for much else. There’s a lot of anticipation of sex, having sex, wondering about sex and generally drooling over Ariq’s super duper sexiness – and none of this would be out of place in the full novel. In the episode, it left me tempted to skip ahead to the actual story.

That’s not to say it doesn’t continue the excellent elements of the previous parts. Zenobia is still smart and snarky and funny. She doesn’t lose every ounce of common sense because she happens to be in love and nor does he. Even though they’re in love and overwhelmed by the sexy and even married under Ariq’s customs, she’s clear that they need to spend more time together before he commits to long term marriage. She knows they hardly know each other, she knows it’s too soon. She has that wonderful common sense about her. They both still have their causes and their passions. Zenobia is clear that if Ariq wanted her to stop writing she wouldn’t consider him a possible husband – there’s no sense of either of them epicly sacrificing their lives to ensure their love is proven to be true – if they love each other they love the whole of each other.

And I love what writing means to Zenobia, how it is a rebellion over her father, how not just the act of writing but what she writes is a sign of her victory over him, her triumph and a symbol of her freedome.

Zenobia is pleased to keep her own name because she wants to assert herself as a separate person and a separate professional. Zenobia is very happy that there’s no question of her losing her money or the independence and freedom and security that having her one money brings. She even says it’s not the money that interests her, it’s having control of the money. Especially in the patriarchal, sexist culture she grew up in, compounded by her abusive father, Zenobia recognises the importance of having that power, of keeping those options over.

I also like Zenobia’s relationship with Helene, it is fraught as Zenobia’s secrets are revealed and Zenobia realises she hasn’t been the best friend in the world. But it’s also sensible and mature – yes, they have difference, yes, Helene is unhappy – but that doesn’t mean the whole friendship is at risk of dramatically going up in flames with lots of flouncing and pouting.

The series continues to have the excellent range of POC I’ve mentioned before, but it goes further into looking into cultural differences. A lot of this is through Zenobia and Ariq’s eyes as they realise they are of different religions and different cultures and that will take an adjustment and reassessment of each other, but also through the wonderful lens of Ariq realises what “common knowledge” means. Between the French ambassador, himself as a Horderebel, the Nipponese empire and Zenobia, they all come from different cultures and contexts and all have very different assumptions and definitions of “common knowledge” including very different ignorances. It’s a wonderful little insight that preserves the sense of the different cultures and the diversity all around

This episode had to happen – but now it has happened I look forward to leaping back into the story again.