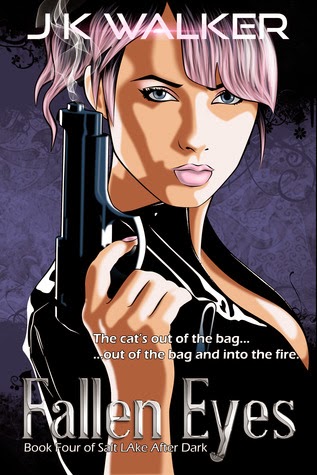 Jazz is overwhelmed with the number of jobs and duties she now has to hold together and is really looking forward to a simple break with Logan – let everyone else handle the chaos for a while.

But people are dying again, there’s a deeply terrifyingly personal enemy that she thought had long since been defeated lurking around. The werewolf pack is chafing under the leadership of a wereleopard. The police and the press both are watching her after the dramatic revelation on television. There’s far too much work for a much deserved holiday

At the end of the last book I said there was too much packed into the space, too many plot lines left untouched and in need of development (especially since they were so awesome and I was very interested in learning what happened next). This book did an excellent job of unpacking a lot of that narrative, expanding it and going into the full consequences of several of the major elements that were only briefly covered before.

One of the main ones was Jazz becoming the new Alpha of the werewolf pack – it seemed like a huge shift and one that happened far too easily given her newness as a shapeshifter and the fact she wasn’t a werewolf. Naturally there are consequences to that and that takes up a hefty chunk of the book as she has to deal with the fallout from that.

Then there’s the whole revelation of the supernatural world to humanity at large – and Jazz being the centre of that and the difficulties and fall out that cases; from both the fearful and the curious.

Less deep but still in need of addressing was how, in the last book, she basically called out the alpha of the werecats and challenged his authority. Again, it was an action that had consequences that had to be followed up, even to a small degree. Then there was Logan becoming a vampire and even Jazz’s actual friendship with Victoria.

I even like how Jazz is having some ongoing health issues from previous injuries. Often Urban Fantasy characters can be mangled beyond all measure but next book, except (maybe) some easily hidden and non-mobility related scars, are completely fine.

I haven’t mentioned the main plot much because I think it’s secondary to the themes that were explored while the plot continued – and the development of Jazz and her friends. Not only did it give us time to look at all these issues that were left hanging but it was also a chance to re-analyse Jazz and the way she lives.

Jazz handles everything in town. Everything – and it’s too much. I’ve said before that the books really present how frazzled  Jazz is having to handle everything. In addition she has a really great relationship with her frineds – she respects them, she loves them, she has a lot of friends and they’re capable and have skills and powers of their own. This is a nice break from a lot of Urban fantasy protagonists who either a) have friends who only exist to serve them or b) have friends who exist only to be imperilled on a semi-regular basis. It’s because of this that Jazz can be confronted with not having to defend her friends all the time, that she doesn’t have to handle everything, her friends can help or handle their own problems. She isn’t alone and doesn’t have to play lone ranger. It also nicely challenges the whole meme of “I can’t stand to see my friends in danger” – well, all those friends have to see you in danger on a semi-regular basis so deal with it.

Because of that theme it makes Jazz needing rescue and even Jazz being so vulnerable and even traumatised in this book something that fits. This isn’t a classic super-damsel being knocked off her perch, this is a character trying to handle everything and not being able to – this is a character who has other strong people around her and doesn’t need to take it all on herself.

The plot itself is primarily there to show all this and has some elements of “monster of the week” when it’s not dealing with the huge issues that have been ongoing and needed addressing. This isn’t a bad thing, it helped clean up some of the meta while still giving a story that was frightening, exciting, very well paced, very personal and with some truly awesome fight scenes and an extremely dangerous enemy. And the danger was always apparent and epicly portrayed. It does touch a lot on Jazz’s own story as well, her own history to make it very personal to her as well, and take the danger beyond the physical.

There’s a lot of excellent character growth as well – from personal histories, to little relationship dramas, to whole new powers unfolding to surprising characters playing Counter Strike – there’s something real about these characters. They don’t just exist when the plot needs them to, they have lives, they have families, they have loved ones, they have hobbies. Actual hobbies.

Frankly, I still can’t see Logan as a love interest. I think in part it’s because his rather terrible written Cajun accent, I just can’t connect with him. Even now I have to look up his name because I can’t remember it.

Diversity-wise this book is excellent. Jazz is Asian, other major characters and friends of hers and contacts are Black, Asian, Native American and Latino; honestly in many books I would list the minority characters and look at any tropes that apply individually but there are so many in Jazz’s life and this series as to render that impractical. We do have a lot of cultural woo-woo applied to some but far from all – and every character has some woo-woo. Two of Jazz’s friends are also bisexual women and in a relationship that is still going strong and is very real. The cast around Jazz is just full of excellent diversity that I really appreciate.

There’s a whole lot of awesome in this book. And on top of all this, I love Loki the pet cat.