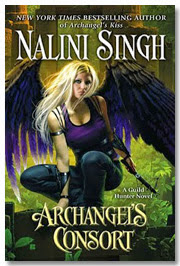 The world is rumbling – the weather is raging, the Earth moving and vampires are suddenly losing control of their bloodlust in droves. All of these dire portents mean one thing – an ancient Archangel is emerging from Sleep

A being of immense power, it could never do anything but radically alter the balance of the Cadre of Ten. But there is one Archangel above all they fear – Caliane, impossibly ancient, incredibly powerful – and Raphael’s mother.

As the portents rage, Elena continues to adapt to live as an angel, now in town among her friends and family – the latter of which is very complicated and incredibly painful as old wounds have yet to heal

Well, it happened. After two books of saying how well this series was balancing the romance and the plot and generally praising how we can have a lot of sexual tension, sexual obsession and sex scenes and relationship drama without it eclipsing everything else, we have this book – which sadly fails to do that

Partly it’s because Raphael and Elena spend a lot more time having sex than they did in previous books. Also I think there’s a missed opportunity in examining how the mechanics of sex would differ when you have a 20 foot wing span – and I’m not being snarky there. This series is very good at covering the mechanics of being an angel and things like them needing nice, wide open plan houses because small rooms and low ceilings are a pain in the arse for angels with large wings. Even covering things like how a vertical take off is actually really really hard to do or how wings in combat can be a liability.

And partly it’s because there are major issues in this world setting I think have been unaddressed and therefore needed more focus than the repeated sex scenes. Like last book the city of Beijing was destroyed. Beijing – one of the oldest, largest cities in the world and the capital of one of the major powers of the world – beyond a little moping about it there was surprisingly little aftermath. It was used as a way to gasp at how powerful Archangels are, but not as something that should have shaken the entire planet. This also links into the various atrocities and horrors that re happening in this book – again they’re used to make people busy and to give a sense of how major the events are but without any real long term cost or effect of any of it. Either we get close, personal grief from Elena over something that has hit close to her family or her own traumatic past or we get nothing. Earthquakes, destruction, devastation – I can understand angelkind being indifferent because that’s there thing – but these things should have a very real societal and economic effect, not just personal trauma.

Equally, Lijuan is still alive and around after the dramatic events of the last book… what’s happening with that? Is everyone just kind of going to pretend the show down didn’t happen? Is it like one of those office parties where everyone got really drunk and did silly things so the next day at the office everyone’s just going to pretend it didn’t happen?

But mainly I think it’s because there isn’t much in the way of solid plot to this book – leaving the main characters not only avoiding a lot of side issues to spend more time in bed, but also having little or no involvement in the actual plot. Something big and ominous is coming. There are signs and portents. Everything’s ominous… and the only real think Elena and Raphael do about it is send out minions to go looking and generally get on with their normal lives, occasionally talking time out to clear up some mess.

So most of the book is spent on sex and romance, Elena’s personal issues and trauma and Elena training. None of these are bad (though, again, a lot of sex). The romance includes a lot of scenes of Elena making sure she has her own space, of making sure every time he claims her she is clear that she’s claiming him as well and this is an equal partnership. There’s a lot of her refusing to obey, be subservient or be neatly tucked away safety – all of these are great things. Elena’s trauma is excellently presented, it doesn’t go away when it’s convenient, we can see how it affects her, how it has stayed with her and how she is still dealing with it. It is treated very respectfully and with a lot of realism that I really respect. I also love her interactions with her father, especially her both championing her sister and developing a strong respect for her step-mother (and reassessing her own opinion of the woman). Even the training is really good because it explores angel physiology and also has Elena working at something rather than being effortlessly perfect at it like so many protagonists

All of this is good – but it’s begging for a central plot line that just isn’t there beyond constant ominous rumblings – at times it feels like they’re ignoring it. It’s like we have all these beautiful paintings in a house and everyone’s ignoring the fact that there’s no walls. In turn it meant after enjoying all these side elements, the main plot started – and then we were at the end of the book – because it didn’t substantively start until so late in.

I hasten to say again that all these elements are very very good – they’re all well done and they all needed to be there. But it still felt like lots of embellishment without a lot of structure and that, perhaps, if we were going to spend so much time focusing on these “side” issues, it may have been better to have a book entirely devoted to them without the ominous looming distraction of this plot line. As it stands, the characters feel like they are ignoring something vital and/or that the main plot is an actual distraction from what really matters in this book.

On marginalised people, we’re following the same pattern on race as the previous books. We have a POC protagonist, most of the Archangels are POC, including the most powerful. Some of the 7, Raphael’s personal guard are POC (though the most prominent, Illium and Dmitri, are not) as are a number of Elena’s fellow hunters. POC are the norm, stereotyping is not – it’s nicely done and a definite plus. Racial diversity is the norm.

This book has also improved with gender presentation – not only do we have Elena continuing to be the excellent, determined, strong (and not just in the sense of being physically powerful) character she has always been, but we have Sara (wonderful supportive friend, head of the guild and a mother) around more. We have appearances from Favrashi, Hannah, Lijuan and Caliane – all notably powerful but I’m most drawn to Gwendolyn, Elena’s stepmother. She’s strong in a way that is very different from all these mighty archangels and she impressively shatters Elena’s preconceptions of who her stepmother is (meek and mild servant to her dad).

Unfortunately, there are still no LGBT characters.

I’m in an odd position of liking a lot of individual elements of this book while, at the same time, not being a huge fan of the book itself. It’s that lack of a main plot line or, rather, that main plot line being there but the characters not actually being all that focused on it. It made all the things they did focus on – even though they were well done and important – seem like distractions because there’s this BIG THING happening and it’s rumbling away and we’re not really doing anything about it.