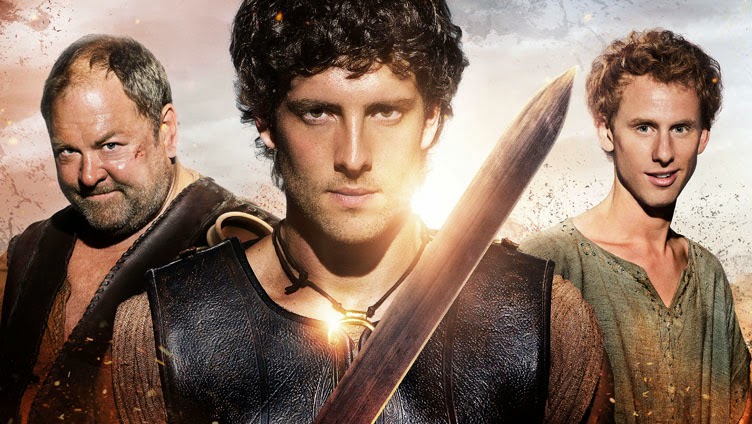 King Minos is dead! Apparently (did that happen last season, I forget?) Anyway new-Queen Ariadne is naturally very sad but the ashes are barely cool before one of her minions report a town is under attack due to evil step-mother Pasiphae learning of Minos’s demise.

Ariadne’s response to this is to send Jason, Hercule and Pythagoras to the town to escort Sarpedon, a guy living there, out of the city of Thera which has fallen (fear not Lord Sarpedon, Ariadne has sent her least capable subjects to help you!). Escorting him also means carrying his very very heavy luggage.

They’re attacked and Hercules and Jason show a surprising level of competence. But Jason is distracted by lady!peril – Hercules points out that the city is actually falling, there’s a massacre going on, you really can’t save everyone. Jason announces he has to try this would mean single handedly stopping the invasion. Luckily none of the other imperilled of the city are attractive young women so Jason is willing to leave after saving her.

Switch to Pasiphae for some exposition as she talks to her general who tells us that Atlantis has never fallen and he doesn’t think they can do it. Pasiphae tells us there’s a statue in the balance with big godly power that stops Atlantis falling so long as it remains in the city. They shall siege this city by means of art theft!

To Atlantis (and screw the statue, it’s on top of a cliffy - plateau with huge walls at the top, that’s going to be a pain in the arse to siege with anything less than bombers, cruise missiles or angry mongols). Sarpedon has been summoned to be Ariadne’s advisor and apparently he and Minos had a beef with each other (which fits the legend which is a nice change for Atlantis).

They may have been hasty to trust him and escort him into the city as a man incapacitates one of the guards then sends a signal to Sarpedon. He opens his heavy chest inside which is a woman holding a knife – she is Medea.

She sneaks through the palace to find a magically hidden room and then makes her way down into a very deep hidden cave. At a strong room she seems to use magic to break down the door and enter a fabulous treasury. Inside she finds a statue and takes it – as she does it glows and Atlantis shakes.

The earthquake rocks all of Atlantis (including where Jason & co are gambling, Hercules losing of course). The quake ends and Medea seems quite upset and shocked by what she’s done. She’s spotted by the guards and runs through the palace, jumping off the balcony and landing on the back of a giant… bird? Dragon? Bat? The guards deserve an award for not even blinking at this before shooting arrows at her (they miss, but hey, still good discipline).

Jason & co are called before Ariadne so she can fill them in on the statue theft (the Palladium). They need to keep it hush hush because if the army learns they’ve lost the artwork they’ll lose all faith in the cliffs, walls, etc and desert. They’re a discerning military and take art appreciation seriously. So Jason & co are dispatched for some art retrieval. Ariadne, you need some better staff

Sarpedon notes that Ariadne has feeling for Jason (based on the complete lack of chemistry between them) and Ariadne gives me a breath of faith that she may actually do something this season by realising there must be a traitor in the palace.

Before setting off, Jason goes to see the Oracle, who may be the most useless prophet ever, perhaps realising it she drugs him causing a flood of pretty cryptic and ambiguous images but including a ship called the Argo (as in Argonauts – Jason, Medea – oooooh this could be interesting) and a possibly sunken city (which is always ominous on a show called Atlantis). It’s possible this was less to impart knowledge so much as the Oracle saying “see what I have to work with?”

She tells him he must embrace his destiny because she’s an Oracle and it’s kind of compulsory.

Ariadne, meanwhile, talks with Sarpedon (who says he was banished by Minos because Minos thought he plotted against him. Her guards have captured Sarpedon’s accomplice – the man who knocked out the guard. Sadly they decide to leave him unguarded, giving Sarpedon chance to poison the man. Unfortunately the man also managed to tell the guards that the Palladium isn’t in the city- it will spread and cause panic.

Medea arrives at Pasiphae’s camp and, greeted warmly, she gives Pasiphae the Palladium.

Jason & co ride off with Pythagoras and Hercules reminding Jason that no matter how many quests he does he still can’t marry Ariadne and Jason throwing back purpose, destiny etc etc. Along the way they’re ambushed by not-very-good archers and all three of them show off impressive fighting skills (yes, even Pythagoras). In the aftermath they have a survivor who begs for mercy and claims to have been forced to fight, Hercules is all for killing him though Jason can’t kill an unarmed man. So Hercules gives the man a chance to pick up a sword or be stabbed without one. Jason intervenes, he can’t kill an unharmed man but Pythagoras points out if information gets out their whole mission is in jeopardy. Despite is hard, practical words Pythagoras disapproves and Jason lets the man go – Hercules disapproves.

Afterwards Hercules and Pythagoras have an interesting talk about why they follow Jason which I actually kind of like for both their characters.

They arrive at Pasiphae’s army’s camp and sneak in, killing several guards (stabbing unarmed people bad, stabbing people in the back, fine.) They manage to grab the Palladium (Hercules breaking a chain with his bare hands) and leave – but raise the alarm. They escape thanks to Jason’s sword, Pythagoras’s brain and a catapult.

They go on the run chased by Pasiphae’s men have another nifty fight scene – and Jason takes an arrow (how many times has this guy been shot?). Shot by the man who they spared earlier – Hercules does not make the same mistake twice.

Jason tries to get them to leave him – of course that isn’t happening. They carry his unconscious body over a rickety bridge that Hercules destroys behind them. They shelter in a cave – and Pasiphae responds with magic – collapsing it and the entrance before preparing to march on Atlantis.

The vast army moves on Atlantis and Sarpedon tries to convince Ariadne to surrender. Ariadne refuses even as her armies start deserting due to lack of nifty statues. Pasiphae lets the deserting soldiers leave – and spreads word that deserters can flee.

In the cave, Hercules and Pythagoras carry Jason through the tunnels – pursued by a Cyclops

Jason & co being Ariadne’s most trusted and go-to minions does not fill me with lots of confidence for her reign. That being said, there was a lot of action this episode and all three of them have grown a lot of competence in the gap between series

I loved Pythagoras and Hercules’s talk – Hercules wanting to have some deeds and purpose to match his bravado while Pythagoras clings to them as his only family. I think it was needed because a lot of the time we get side kicks for the hero without any real explanation as to why they’re doing it beyond a nebulous and rarely shown “friendship”. I like to see that Pythagoras and Hercules are following Jason for personal reasons that go beyond loyalty. And I like Pythagoras’s simple declaration of love – especially coming from a man to other men; yes it’s not romantic but it’s still a surprising and powerful thing for a man to declare his love for men because he sees them as family. And for Hercules to be visibly touched by it (sure the show kind of makes it a joke and Hercules denies his tears – but he doesn’t dismiss the feelings or Pythagoras).

I love mythology and I really love the little shout outs to old legends. Are they all accurate? No. Some of them are little more than the same name, maybe an odd instance – but I still love it. I’m certainly curious as to where Medea is going to fit into things

One issue – Minos did exile Sarpedon (they were brothers) in Greek legend. They fell out because they both fell in love with the same man. I know they change myths and legends a lot on this show an I don’t expect anything close to accuracy but given this show’s complete LGBT erasure (in ancient Greece!) this change is a shame.