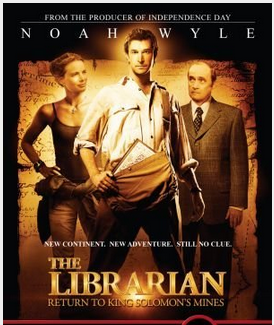 This time, Flynn is in search of King Solomon's mines.  The journey will lead him into Africa, with a legacy from his father that he only now begins to understand the importance of.  Flynn will learn the difference between a good librarian and great librarian, when he learns that the greater good sometimes means making sacrifices.

This series continues to feel camp and very much like a cheap Indiana Jones rip off.  All of the elements are there from a mysterious treasure, which the white male protagonist must retrieve from a country of colour, to the typical sidekick of colour, made to look backward or even savage next to the white male protagonist, and a female love interest.  It's a paint by numbers movie, without any surprises.

Instead of having a guardian, this time Flynn is joined on his journey by Dr. Emily Davenport.  She may not have the same physical skills as a guardian but she actually possess more degrees than Flynn and isn't shy to point out each and every time Flynn gets something wrong.  This greatly gets on Flynn's nerves, as he used to being the smartest one in the room.  The two share an attraction which builds throughout the movie but never really feels authentic to me. I suppose that I should be thankful that they worked together as true partners and at the end of it all, Emily didn't even consider giving up her a career for a man she had just met.


The only other two female characters in this movie were Flynn's mother Margie Carson and of course Charlene.  Margie had a small role and essentially served as a maternal figure to help Flynn deal with his daddy issues.  Margie also once again tried to set Flynn up with a girl and of course, he quickly lost interest in her.  Charlene also had an insignificant role which very much promoted her to obscurity.  While it's great that Flynn must answer to her for his expenses and when he is late for work,  she never really becomes a developed character in the way that Judson does.

Speaking of Judson, thank goodness from Bob Newhart, who once again saved this movie from being an absolute unoriginal bore, just by doing what Newhart does best.

Because of the setting of this story, it's unsurprising that there would be a lot of people of colour in passing, including a Masai tribe.  The problem is that POC were either reduced to the background to add scenery, or in a servant role, or were evil.  Jomo, a man whom Emily and Flynn find buried in the sand up to his neck, decides that he owes a life debt to Emily and Flynn and vows to stick with them until he can repay his debt.  Jomo of course has his face painted and while Emily and Flynn eat chocolate bars, he eats grubs from a tree. I am surprised that Jomo wasn't named Friday, or would that have made the racist characterization too bloody obvious?  This man isn't a character, he's a caricature and the most racist portrayal in this series to date.  We also have Tommy Yellow Hawk, who appears at the beginning of the movie to help Flynn retrieve a magical skull.  Yes, an honest to goodness Native guide.  He was just short of Tonto to Flynn's Lone Ranger.  Finally, we come to General Samir, who we are told is an evil power hungry man.  Yes, that's yet another trope but Samir doesn't get to hold onto his power for long because he is of course in the employ of Uncle Jerry.  At every turn, the characters of colour are denied any kind of agency.

By the time we are at King Solomon's Mines, I simply couldn't be arsed to give a damn about the movie, Flynn, or any of the characters, quite simply because none of them were even remotely likable. To invest in Flynn's daddy issues, a main plot in the story, one must actively like Flynn and feel is pain, so this fell completely flat to me.  I didn't care about Flynn's legacy, when the culture's of characters of colour were being treated so poorly.

Even for 2006, the special effects were absolute shite.  I fully understand that this was a made for television movie and as such, it made me wondered why they tried to be so ambitious with the setting and even the treasure that Flynn was seeking.  I most certainly hope that they weren't counting on the weak plot to plug the holes the special effects left behind.  In short, The Librarian: Return to King Solomon's Mines, is two hours of my life that I will never get back.  Sure, I could have taken The Librarian: Return to King Solomon's for the cheap fluff, Indian Jones and Mummy rip off that it is but the treatment of the characters of colour ruined any possibility of that.