The Librarians, Season 1, Episode 5: And the Apple of Discord 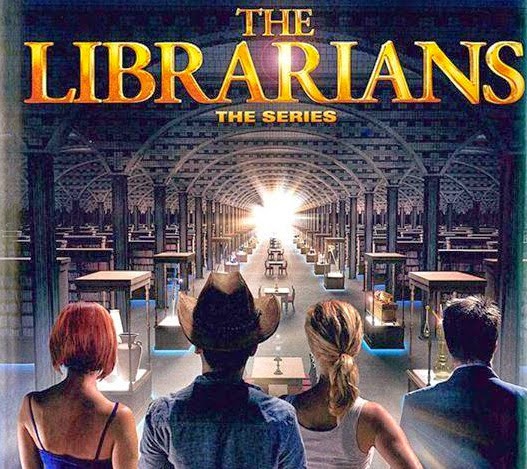 At the Annex everyone buzzes around because of magical Earthquake-type-thingies all around the world. Everyone rushes around researching (and Ezekiel orders pizza). Their research is interrupted by the return of Flynn, the Librarian, dramatically announcing “it’s the dragons!”

Reunion time (Jenkins happily telling Flynn that he keeps their bags packed if he wants rid of them, Flynn surprised no-one is dead yet and greeting his Guardian, Eve, by title). Eve also would quite like the desk she uses not to keep resetting itself to Flynn’s wishes

Flynn explains that dragons are largely asleep underground unless they’re annoyed then they wake up all cranky and havoc-causey (Very like me. They just need draconic coffee.) He and Jenkins also argue about the difference between western and eastern dragons who have a long standing feud. The extent of the havoc-ness is why Flynn has returned early and he presents a guess that the hoarding nature of dragons means there’s a good chance something has been stolen from them.

Flynn dishes out lots of orders as he prepares for the arrival of Mr. Drake, the Eastern Dragon’s representative but Eve takes him aside to have a quick interjection – she’s not happy with him coming to the Annex after so long away and just taking over and completely undermining her.

Discussion called because the doorbell rings, Mr. Drake shows up and Ezekiel, despite being a genius, assumes the old man in the expensive suit is the pizza delivery man. Also, arcane rules means that whoever speaks first now speaks for the Library forever more – so better make sure you don’t run into a cleaning lady or a receptionist on the way to the Librarians. Ezekiel continues to speak to the dragon as the pizza guy. But he still agrees to a draconic intercession in the name of pizza which is extra bad

Even by The Librarians standard, this is ludicrous.

Which means Ezekiel and his wisecracking is now the diplomat as Drake claims the western dragons stole a pearl from the eastern dragons. Also for REASONS Flynn cannot claim Library spokesman back off Ezekiel and Drake won’t speak to anyone by Ezekiel. If Drake doesn’t get his pearl back the Eastern Dragons will collectively lose their shit. Ezekiel is, slowly and surely as if he isn’t a genius, convinced to make Jenkins the Consigliore of the arbiter. Whatever that means.

So Ezekiel and Jenkins stay to play host while the rest of the group goes pearl hunting. Which means going to steal something from the western dragons in Rome without Ezekiel because Ezekiel now has the intelligence of semolina. Jenkins explains to him that Drake will be drawing up a list of things to complain about since the last meeting (in San Francisco during the 1906 Earthquake – the last time the dragons were not happy). Jenkins suggests that he take the lead and Ezekiel decides that, no, despite knowing nothing about dragons and just displayed a level of incompetence that means he should either never be trusted again or should pursue a career in politics, he will take the lead.

The rest of the gang arrive in the Vatican and Cassandra uses her special brain to solve a puzzle to the entrance (helped by Jake to keep her brain on track while Eve points this out to Flynn). They go down a tunnel, for some reason chased by the police, which seals behind them.

Eve leads as Guardian and takes the chance to check on Flynn’s progress in getting the Library back (slow). More traps and they claim a pearl – which makes Jake’s eyes glow purple which probably isn’t a good sign. He locks them in and goes wandering off to look at art.

The gang he leaves behind finds a western dragon who claims they never stole the pearl – and dragons can’t lie.

They catch up with Jake who is moving paintings around which really upsets the gallery owners – in the scuffle he drops his pearl which shatters to reveal an apple inside. Cassandra picks up the apple and she goes evil – running off after playing with Eve’s gun while Eve has to explain things to the Italian authorities. While she does so Flynn realises the apple is the Apple of Discord which turns people into the worst versions of themselves (so Jake because the extremely arrogant art critic). Eve is terrified of what will happen if Ezekiel touches the apple while Jake thinks Cassandra with the apple isn’t so bad

Things seem to be going rather well until evil Dulaque of the bad guys shows up eating Ezekiel’s pizza. Evil Cassandra also returns to run into a knife wielding Lamia. Jenkins gets up and leaves the room. Dulaque’s organisation is recognised by the assembled supernatural beings and Dulaque calls a vote of no confidence for the library and wants it shut down

On the plus side, Evil Cassandra’s genius brain picks out all the patterns and formulas necessary to incapacitate Lamia very very quickly. One the downside, she wants to go use this new destructive formulas more dramatically. Mainly to make a Roman power plant blow up and take out most of Europe. They use mental tricks to bring Cassandra out of her evil brain loop (and everyone agrees, again, Ezekiel can’t hold the apple). Of course that leaves Flynn and Eve picking up the apple and doing flirty evil which quickly turns into a power battle over who is boss. In case we missed that subtlety.  Eve gets it, then Lamia (who is getting increasingly confused) jumps in and Flynn ends up with it – getting a huge dose of evil apple arrogance and fury (and more flirting with Eve)

Ezekiel catches up with the leaving Jenkins to curse him out for being a coward – for never choosing a side and never really committing to the Librarian team. Jenkins throws some criticism at Ezekiel being a thief. He also counters he has chosen over and over again over the years and achieved nothing except more blood and loss; which is why he came to the Annex to work alone – because nothing changes. Wow, didn’t expect that much of an epic speech.

Ezekiel goes back in and tries to stop Dulaque and fails terribly – but he seems to have moved Jenkins who uses his masterful knowledge of procedures to bog everything down. But Dulaque manages to get things back on track just as Evil Flynn returns to the Annex followed by the others; he chases out all the less librarians.

Alone with the council Flynn rants rather excessively all over everyone and everything with an added side of how awesome he is and how he could take all of them if he wanted to before musing on world domination. Jenkins charges out to distract Flynn while Ezekiel steals the apple off him. Apple-less, Flynn then changes his speech into why the Library is actually kind of a good thing and the motion to remove the library is cancelled

Oh and Ezekiel doesn’t turn evil because he’s already the worst version of himself, he can’t get eviller (I don’t know if this makes him super evil, or super good – because the worst version of Ezekiel is a thief, not a murderer who blows up power plants to watch them go boom). At least Jenkins likes him now.

And on the pearl theft, Ezekiel does a last minute attempt to justify his existence by… suggesting the dragons stole their own pearl? I don’t know and I don’t think anyone actually cares.

Back to the plot that actually matters – Jenkins confronts Dulaque for being secretly behind everything and how horrendous it was for him to wake the dragons. Dulaque suggests Jenkins join him and when he refuses things get cryptic – Dulaque says “our sides have always been chosen for us”. Jenkins counters “we choose – thousands of years ago when you and I stopped being… whatever we were.” What what what tell me mooore?! Jenkins has a big conflict face.

Flynn meets Eve with her transfer papers that would make her officially part of the Library – It also gives her the chance to back out because he recognises that he recruited her to the Library, dumped a job on her and then ran off – which didn’t give her a choice or treat her as an equal. He also praises the amazing things she’s achieved with the team. He also offers to stay if she does – she does agree to stay but also thinks he needs to go back out and continue his mission to bring the library back.

He kisses her before leaving

I love that Eve is asserting her leadership and making it clear that Flynn can’t just waltz in and take over without any acknowledgement of what has happened or how the group dynamic has developed especially after Eve has made the group work.

The flip side is, I wish she could make this point without demanding a time out in the middle of a clearly time sensitive crisis.

Ezekiel in this episode is appalling – they destroyed this character’s any pretence at intelligence to force him and Jenkins to be the ones in the library.  Especially since this character has been the least developed of the geniuses.

The whole plot line was kind of weak and ended without any real explanation – there was one shiny point:

Jenkins. That’s a lot of epic backstory hinted at right there – and some really powerful despair and sadness and the toll of a clearly ancient being. I want more Jenkins! And… less of everyone else, which is kind of sad. Or at least more silly fun to justify everyone else.