The Astounding Antagonists by Rafael Chandler 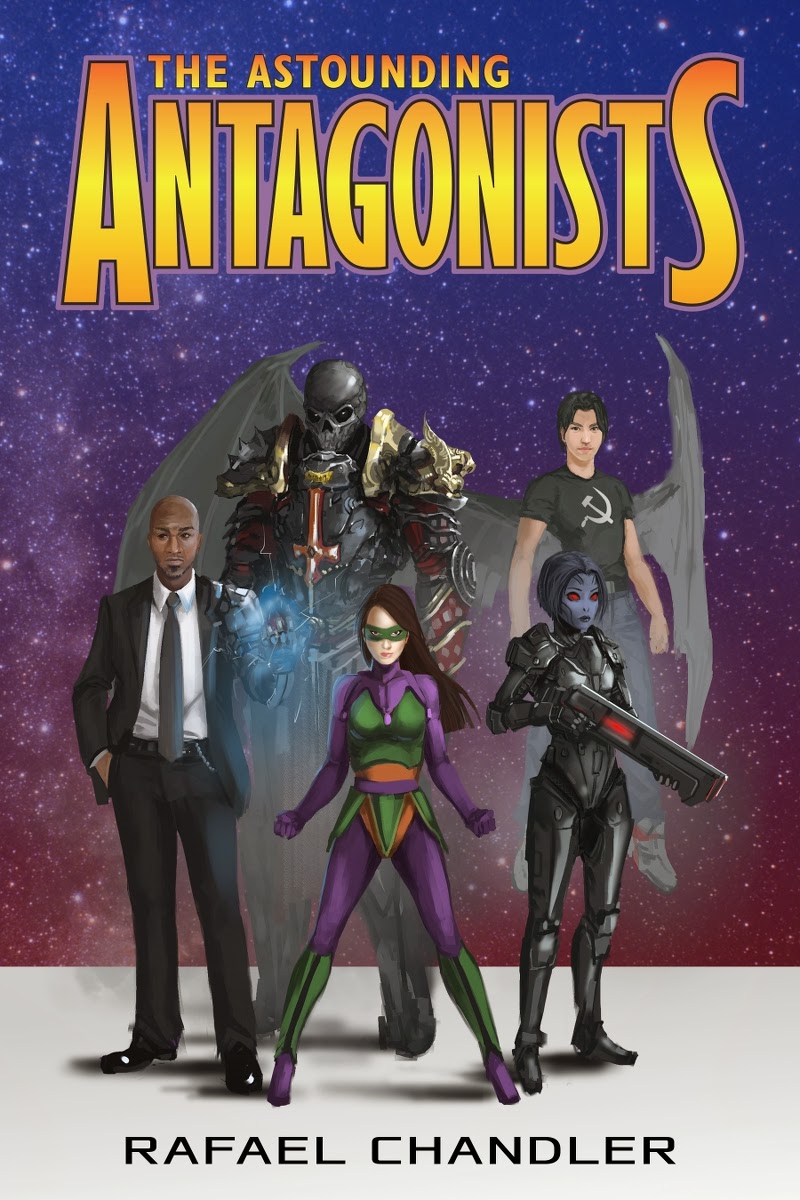 At the urging of his alien partner in crime, Helen Damnation, Dr. Argon is putting together a supervillain team to pull off the ultimate crime – the destruction of Helen’s space station to keep it out of the hands of super heroes.

If they pull it off, the world will be free – if not, the heroes will have unprecedented power to impose their vision on the world – a vision garnered from their ivory towers that cares little for the people who are disposed of out of their view.

This book hit all the right notes for me and it’s actually taken me a while to try and find the way to explain just how excellent this book was. I’m struggling because I really don’t know how to truly explain this book without spoiling it.

While there are certainly many elements of the Superhero genre that are willing to go dark, to espouse an anti-hero and even flirt with the ideas of oppression and superheroes being on the wrong side, I don’t think any book I’ve come across has gone as far, as dark or as brutally critical as this one

Rather than aiming for typical castings of good and evil, this book is cruelly scathing on what we ACTUALLY consider good and how that would reflect on superheroes in our world. So we have superheroes with their millionaire secret identities (playboy, genius, scientists) and they have vast, multi-national companies… But vast, multinational companies are responsible for all kinds of abuses – employee rights, pollution, raiding developing nations, having vast influence over governments – how much more so would this be if they were headed by beings with super-powers and the unquestionable support of the populace.

Historic heroes from the US’s Cold War past are still around, champions of the American Way – but super hero comics have used heroes to combat all kinds of real world issues – especially during World War 2 and the Cold War. What is the actual implication of super-powerful beings being involved in a lot of proxy cold-wars, regime changes and a myriad of other actions in the name of fighting communism and/or terrorism? There’s even a superhero slaughtering undocumented migrants along the US/Mexico border.

And, of course, in a world with actual super-villains issues like “due process” and “enhanced interrogation” are much more dire – if “terrorism” has us excusing torture and detention without trial, what would be our reaction to super-powered villains?

In short, the superheroes, the paragons of law and order pretty much do exactly what I would cynically expect paragons of “law and order” to actually do. It’s corrupt, it’s brutal and it’s all the abuses that the powerful can inflict to maintain that power and the system writ large. Especially since the most common way of becoming super heroes, the Prisms, are tightly policed by the superheroes and American government themselves furthering their power and control by controlling this vital new resource. Many of these superheroes are obvious excellent parallels with major DC or Marvel characters

This is the world setting and it’s a truly fascinating backdrop and backbone to everything else – and puts a whole new slant to us following the supervillains. And, again, it’s not as simple as just flipping the switch and making the villains wonderful freedom fighters. We have some villains – many of whom we see in the prison and some who our protagonists actually fight alongside are simply pure evil – whether it’s the demonic Baelphagor who seeks nothing but death and carnage (while also brutally crushing idealism with his scathing commentary on their chance of actually changing anything) and many more are, at best, less-than ideal and certainly very self-serving. It’s not a good vs evil battle by any stretch.

So this is the amazing world setting and from there we go to our amazing characters – each of which is truly spectacular and I love them all. There’s Dr. Argon, a Black, Gay man, a genius with his amazing inventions desperately putting together an impossible plan while at the same time being – as one would expect from a genius of his calibre, arrogant and with minimal social skills which he desperately tries to imitate. He clings to hope he doesn’t really believe in, tries to bring about change he knows is impossible and is constantly tempted by a normal life with his husband but still driven to his impossible mission; doing things that he knows are wrong and hating himself for them – but doing them because he has to.

And there’s Motley, a middle aged Latina woman who knows she is out of her league. She’s a brilliant thief, snarky, incredibly funny and from a background of extreme poverty and loss that gives her an intensely critical lens to cast on the high privileged super heroes. Again, she faces conflict with her self-interest (and survival) and conscience and becoming a general well round, excellent, awesome character (her friendship is amazing and I love that she has an added fascination with history – it’s this random quirk that makes her such a full character).

Helen Damnation (which is an awesome name) is an alien – with so much history and conflict and unflinching moral code that I can’t even begin to spoil but is, of course, awesome.

Coltan is Japanese-American, young and intensely idealistic in the university-marxist kind of way. He has both familial sense of injustice (his grandfather was caught in the World War 2 internment) and his own well-read social conscience. His idealism takes a lot of hard knocks and there’s a nice romance plot there for him as well.

That romance plot also opens up some other interesting little superhero tropes – especially with the superheroines. The genre so commonly sexualises superheroines with no trousers and boob windows and this is reflected in the pressures these face – superheroines who are afraid of getting older, who have to fixate on how they look at least as much as their powers; one storyline follows a superheroine who is now middle aged and facing pressures because of that.

After all this I haven’t said a lot about the plot – even though it was good, exciting, well paced, well balanced and involved all the characters excellently. The plot was excellent – but so much else was amazing that I find myself running out of superlative adjectives.

I loved this book. The plot was excellent even that excellent point was overwhelmed by the diversity, the excellent characterisations, the brilliant world and the on-the-nose social commentary all delivered in a way that perfectly married with the plot itself. It was fun, it was deep, it was snarky, it was diverse, it was complex, it was poignant and it was epic and horrific and amazing and just damn amazing.