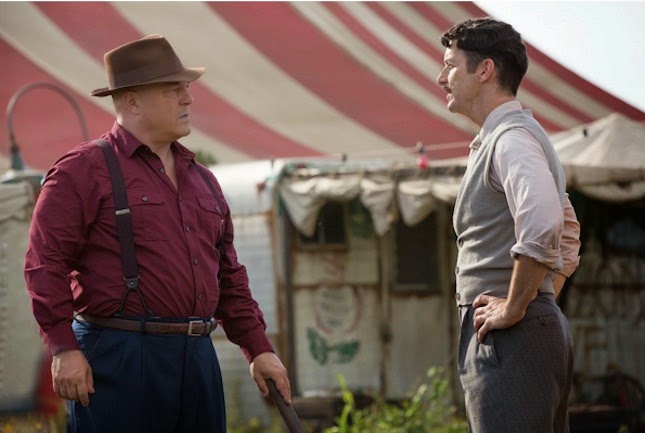 American Horror Story: Freak Show has a large number of LGBT characters, probably more than any show we’re watching at the moment (Lost Girl is the only show that matches it in terms of raw numbers).
And they all die. Pretty much all of them are brutally murdered. Not only were each of these characters killed, but their deaths are nearly always linked or related to their sexuality. In addition, any character who lasts more than a few episodes is so cringe-inducingly awful, so utterly and completely evil beyond any kind of development or redemption that we’re positively cheering their demise. It’s a relief - a celebration even - when each of these gay characters were murdered.


This portrayal is, frankly, awful.


This is usually the point where the history excuse will be trotted out. These were different times, homophobia was more overt, tolerance far lower, etc etc.  Indeed, the press for the show itself has suggested it provided a level of insight into what it was like to be gay in the 1950s and living in this toxic homophobic atmosphere.


I never knew being closeted would force gay men to strangle 2 foot tall Indian women and sell their bodies for display.


Needless to say, I’m not impressed with this excuse. Of course, we shouldn’t gloss over homophobia or any prejudice - both historical and present. It would be insulting and offensive to pretend this period wasn’t even more saturated in toxic homophobia than today and highly disrespectful to discount the persecution of the time period.


But nor should we revel in it or perpetuate it. It is possible to depict homophobia (or any prejudice) harshly, starkly and in all of it’s full awfulness while equally depicting it as wrong. Showing unacceptable injustices of the past is not only understandable, it is desirable - but we must also make it clear that they ARE unacceptable and they ARE injustices. Mere depiction with a hand wave of “history” ignores the toll these prejudices took (and take) on their victims; they rob these atrocities of their horror and add to the depiction of them as acceptable; especially since these prejudices and attitudes are far from dead. Many viewers may think that merely seeing homophobic prejudice is an inherent depiction of how wrong homophobia is - but they have lived charmed lives not to have seen the same attitudes parroted and the same abuse championed around us to this day.


Prejudice cannot be merely depicted, it must be challenged.


Ironically, a good example of how this can be done is shown by American Horror Story: Asylum. The treatment of Lana in the asylum was agonisingly painful to watch - so painful and real that I often couldn’t stand to watch an entire episode at a time. But it was equally clear that the treatment was wrong, that the torturous conversion therapy was a sickening, gross act of abuse and that Lana was being victimised. More, Lana herself was highly sympathetic, developed and clearly someone we were meant to be championing - in many ways she was the protagonist of the season, as much as Kit, or Sister Jude (insofar as this show has protagonists). The depiction wasn’t perfect but it was an excellent presentation of historical homophobia - and an excellent challenge of it.


Can we honestly say, that at any point in American Horror Story: Freak Show, homophobia was challenged? Even little things like Maggie’s scorn for Stanley needing “more lead in his loafers” came with no counter; worse because Stanley is so very deserving of scorn, such contempt feels natural, even just.


This may be the greatest indictment of the homophobia depicted on American Horror Story: Freak Show; not only was there no challenge to it, but none of these many deaths were even remotely meant to be sad, not one of these gay characters was remotely presented as sympathetic.
Most of them died to make a point. Alice and Lucy, Chester’s wife and her lover, died to exposition Chester’s own fragile mentality and history of murder. They could have been anyone, the postman, his aged mother, fellow army buddies - they were completely replaceable bodies who were there to die for Chester’s story. They were even made actively unpleasant, taunting and teasing the troubled Chester in a way that almost felt like we were meant to pity him. Not them.


Adam died to establish Dandy as a serial killer. Again, Andy is so lacking in characterisation that it is far easier to say “the guy played by Matt Bomer” than his character name - because his character is meaningless. He was a gay prostitute, there to establish that Dell was gay and Dandy a murderer. Similarly, the nameless gay men who Dell murdered in his and Desiree’s backstory, existed to crudely exposition Desiree being intersex (they had sex with her to “convert” them) and Dell being a murderer.


These characters were all murdered - and they were all murdered as a direct result of their sexuality and not once were we expected to feel sad or outraged about this. As we’ve mentioned before when discussing the Death of Marginalised Characters, no marginalised death will carry emotional impact if the character who died has not been developed. Without that development, their deaths are merely plot devices that advance other characters.


Which, of course, brings us to Dell and Stanley which is even worse. The previous minor gay, lesbian and bisexual characters may have had meaningless deaths - but Dell and Stanley’s deaths (yes, Stanley is technically alive, but seriously, he has been tortured and mutilated and left in a cage - it’s a stand in for death) were things to celebrate. Both of these men were completely and utterly irredeemably evil - they were abusers, they were murderers. Stanley was grossly immoral defined only by his “freakish” sexual endowment and his utterly callous drive to kill for money (contrast with Maggie who has a chance to become humanised and sympathetic before dying even if no-one forgave her and, ultimately, her death was seen as righteous punishment for her crimes) as he gathers corpse parts for money. He is an almost caricature of a villain - he is irredeemably vile and his torturous death is a matter of righteous triumph. There is no challenge of any homophobia that afflicts Stanley’s life and his victimisation is a thing of celebration.


With Dell we have the same - only more overt homophobia in his life. He is unsubtly coupled with both the intersex Desiree and bearded lady Ethel as some kind of clumsy foreshadowing (which is also insulting to the gender presentation of both women). But this just pushes him to more evil, from attacking Desiree’s doctor to being blackmailed into murdering Ma Petite - Dell being gay becomes part of the evil he inflicts on those around him. Even then, even with Dell being pressed by Stanley, even with him driven to suicide, there was nothing sympathetic or pitiable about Dell. The vague, desperate attempt to try and force some pathetically lacking interaction with Jimmy, was ultimately about giving Jimmy more reasons to be sad and mopey, than to give Dell some character. And, even this highly limited and very late attempt couldn’t approach the magnitude of Dell’s crimes. The minute Dell strangled Ma Petite and murdered Desiree’s doctor it ensured that it would be near impossible to make this character’s death something we wouldn’t celebrate. Not that a great deal of effort was put in to trying.
Are there any positive examples to counter the depraved murderers? No. Not one. This is the depiction of gay people on this show - bit characters who die for the other characters’ growth and caricatures of villains, who are so irredeemably evil, that we cheer when they die. That has nothing to do with historical homophobia or the struggles LGBT people faced and using that excuse to perpetuate yet more homophobia is just rubbing salt into old wounds.


We also have Desiree, who is an intersex character. While there are some interesting conversations about her doctor, her history and her socialisation; so much of Desiree’s character is sexualised. It’s not even the way she is treated by others in the Freak Show; nor is it a comment on how she is forced to make her living as a “Freak” (one of the recurring themes of Freak Show) - but everything she says as well. She’s always there with a sexual quip, a sexual comment or joke - when Bette and Dot need a talent, she even randomly suggests that they fire ping pong balls out of their vagina. Her past story, such as it is, is as a sex worker that emphasises on her intersex identity. There is never any attempt to challenge the fetishism her character faces constantly - and actively encourages.


It is only when the classic angry Black woman trope takes over later in the season, that Desiree finally evolves from being a Jezebel to a Sapphire, like some kind of desperately racist pokemon game.


This season is a classic example of not all inclusion being good. Because on paper? On paper, there’s a lot of LGBT characters here - compared to the vast majority of shows we follow. But these characters are terrible - they’re truly, utterly, irredeemably awful. They are characterless, or they are hardly developed forces of evil - and they’re all dead; all murdered and nearly all because of their sexuality. That’s an epic amount of gaydeath, an awful lot of demonisation and a whole lot of really toxic tropes. The only thing more offensive than this show is the number of people praising it for its LGBT inclusion.


If this is inclusion, I prefer erasure.