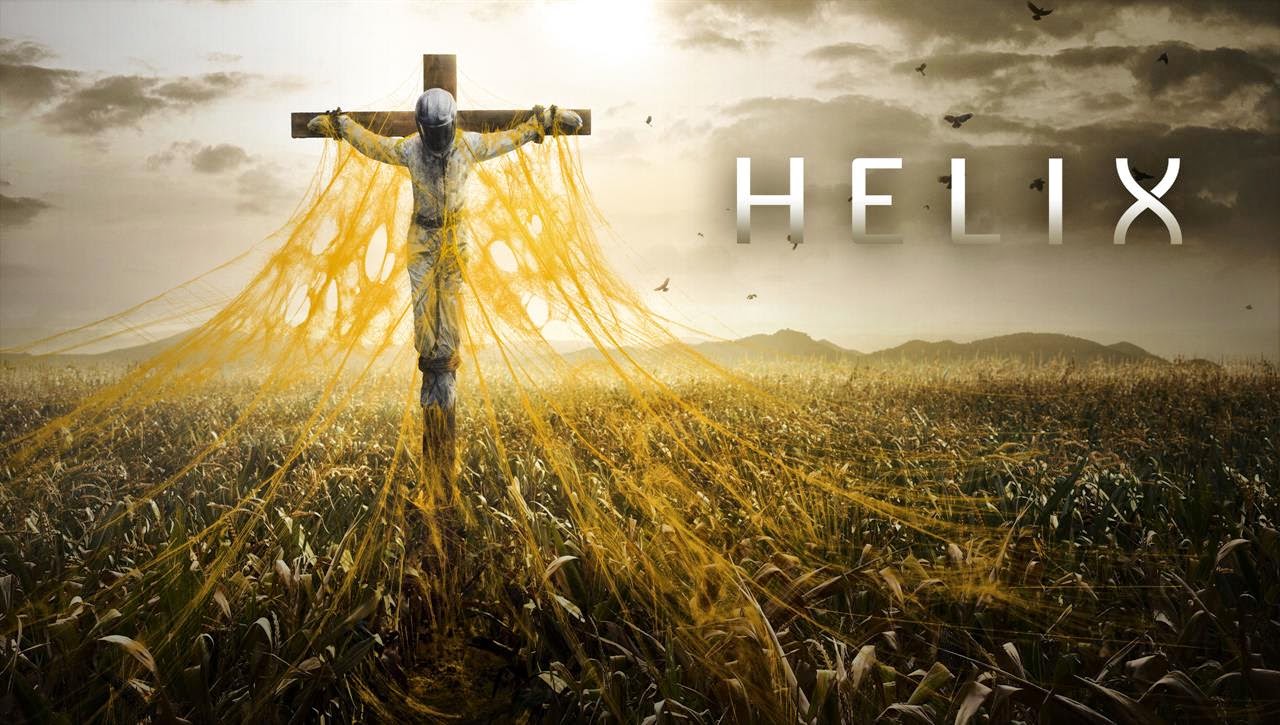 Dramatic opening – a woman cowering and hiding while we hear screams, combat and have flashes of nasty zombie people (though they look more like fungus zombies than goo zombies)

From there to Julia reaching an island and making notes that this is where the pandemic originated. A man in a weird burlap hazmat suit asks her “do you know the way to San Jose” then hits her.

And then we get an eye rolling around and an announcement: Day 1

Ok… random? My head’s starting to hurt watching this

And now we have a sailing ship covered in bodies – nasty, scabby bodies, not goo-zombies – being investigated by Peter and Sarah in full haz mat suits (not made of burlap). Peter makes a super ominous, dramatic speech about it being “just the beginning.” A new character, a Dr. Kyle Somer, reports to their boat that they have no idea what happened to the bodies – only that the disease is fast and aggressive and that it’s not Narvic (goo-zombie plague).

Peter and Sarah split up (of course) and Peter finds two of the plague victims stabbed each other while Sarah finds the woman who was cowering in the dramatic opening. She’s alive and she tries to stab Sarah. Kyle saves Sarah by injecting her with a tranquiliser which Sarah disapproves of because it will get in the way of medical research – yes she’s very very focused, but the woman could be immune to the disease.

When they question her, she tells them the people on the boat got the disease after visiting an island.

The doctors return to their ship and speak to the Captain who, having heard that the outbreak isn’t Narvik (their job was to track down a possible Narvik outbreak) declares job is done and they need to go home. Peter does exactly the same thing Alan did last season and invokes his authority and demands she allow him to inspect the island. She does smack him down for using the word “order” and makes him apologise, but she also follows his demands. But she warns them that she can’t wait for them because she has orders – they will have to wait until another boat is sent – 2 weeks. They’re also going to be out of contact since the island is so isolated.

Elsewhere on the island, Julia is carried by burlap haz-mat guy into a barn

The doctors arrive on the island – and they’ve brought the traumatised woman with them as well for funsies. Kyle and Sarah talks about how Alan blew up a building in Paris – presumably related to the ending of the last season?

As they walk through the woods, Leila, the traumatised woman, zones out and then sees something which has her screaming and running off. The doctors chase after her, Sarah impaling her foot on a spike as she does so.

In the barn, burlap guy stops asking Julia about the way to San Jose when he hears the others running around. Kyle treats Sarah’s foot and Sarah mentions in passing that she isn’t worried about infection (after she went all silver eyed in the last season). Kyle is super curious as to what happened then – all he (and, presumably, everyone else) knows is that the CDC team burned the place down to stop an outbreak. Sarah also treats us to the non-sequiter that she hasn’t seen Alan in a year and doesn’t want to.

Leila and Peter rejoin them, Peter telling her that the trap she stepped in was a man trap. Leila, again, starts zoning out and panicking and seeing things – Peter tries to reassure her but Sarah also sees it – a skull. One of many – a huge swath of skulls. Leila screams and runs.

In the barn, burlap-guy foils Julia’s escape attempt and continues to ask “do you know the way to San Jose?” He then pulls out a roll of sharp things and goes for her eyes with tweezers.

The doctors try to track Leila down, also finding a blood trail through the forest. They arrive in the barn and Kyle drops the jarred rabbit he collected. The Day 1 returns – and counts rapidly into the future as the rabbit rots until they’re 30 years later.

Then we’re back to Julia and burlap guy – who uses the tweezers to remove Julia’s contact lenses that cover her silver eyes. The man then takes off his mask and says that he knew she’d come one day.

Back to present day (so is Julia 30 years in the future?) and Kyle rejects Sarah’s plan to keep searching for Leila because of her foot – she tells Peter she’ll be fine but he’s not impressed and he thinks her super healing doesn’t make her special, though it makes her reckless. Well that was somewhat random. They find more blood in the building they’re in – and Leila’s tied to the ceiling. In the trees outside, they see flickering lights in the darkness.

The lights are burning torches carried by a group of people in robes. They go outside to introduce themselves to the leader, Anne, who tells them they’re trespassing. Peter points out the recently murdered corpse and Anne asks the doctors to come with them for shelter because the island is dangerous. She says there’s no time to bring the body or perform an autopsy. They go with the cultists.

And we zoom to the future (or something) for Julia and burlap guy who introduces himself as Caleb. She talks about a new outbreak on the mainland called TXM7 which she believes came from the island 30 years ago. She’s now looking for a cure because even the silver eyed are starting to die. Including her – she has marks of infection on her shoulder.

In the present the doctors are taken to cult HQ which is a very impressive building with very dramatic music. There they’re interviewed by the cultists who don’t want them there because their cult has cut off ties with the outside world. They’re lead by someone called Brother Michael who wanders in to warn them about wolves and bears on the island. In turn Peter and Sarah try to warn him that their food could be contaminated with a deadly plague. Kyle also wants to talk about the murder of Leila – Michael avoids all questions and has them stay the night. The doctors realise they’re in a cult.

And to the future and Julia asks Caleb for help finding Alan. Caleb reveals he’s on the island but she may not like what she finds. He takes her to the ruined cult building. There he takes her to Alan’s grave.

Back to the present and a cultist brings Sarah water – I think it might be Alan. In the basement, a woman is strapped down, her teeth removed and something poured down her throat by the cultists.

Ok, what is going on? It feels  like a huge season reboot – everything that happened in season 1 seems like it has just being completely cast aside – and now we have another isolated setting and a whole new plague with sinister cultists taking the place of the sinister corporation. Same basic plot elements with a very similar setting – with the old story kind of cast aside except for odd references. This is a shame because I was really hopeful for how the new season would develop especially after the clues at the end of season 1.

This episode also had way too much artsiness for its own good, the sweeping time lines, the rapidly changing scenes – especially in the beginning of the episode it was hard to follow and pretty annoying. This doesn’t fill me with confidence for the new season. (And why was Caleb constantly asking about San Jose anyway? Beyond a desperate attempt to force weird creepiness?)