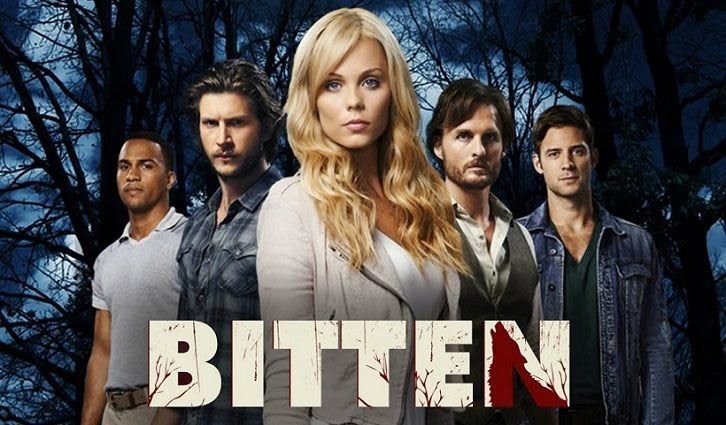 We have a man, Nate Parker, being rather brutally interrogated and tortured. He has very obvious injuries. He tries to tell his questioner about Malcolm Danvers’ plot to try and take over the Pack last season.

After thoroughly terrifying the man, they open the doors and he makes his way to the surface – and runs. He shifts into a wolf, runs (running past a little sign with a symbol on it which I take as significant) – and is shot.

To the Pack; Elena and Clay are interrogating Mutts to find out where Malcolm is – and learn he’s setting up a meeting with other Mutts to continues his campaign against the Pack. Meanwhile, Jeremy has a meeting with the Alpha Council, apparently leaders of other Packs, who are not impressed by the way Jeremy has been taking care of business and allowing a rebellion on his turf. He’s been too weak so they’re giving him an ultimatum – he finds Malcolm and kills him within a week to prove his pack’s strength; or they find Malcolm and take over his pack at the same time. In the meantime one of the Alphas, the Spanish Alpha Rodrigo, is going to hang around and be a nuisance

Rodrigo is at least sympathetic to Jeremy, unlike the Russian Alpha, Roman, who dripped disrespect everywhere. Jeremy and his guest discuss the possibility of Malcolm being aided by a foreign Alpha trying to take over North America. He agrees to help Jeremy kill Roman is Roman is behind the plot.

Finding Malcolm seems to also involve Nick seducing a woman and removing a badge she’s carrying for Joey to tamper with. Using the camera on her badge and a fake FBI call, they use her to check Malcolm’s financial records and find a possible base of operations.

And because this is Bitten this is also our cue to zap in on Elena and Clay having sex. Afterwards, Clay tries to confront Elena about Phillip’s death which she’s really not dealing with, especially since his family are trying to get in touch and she is being consumed by guilt weasels.

The guilt weasels also means she brutally kills their next potential source of information rather than getting all the possible info out of him, much to Clay’s disapproval. He tries to get her to leave the dirty work to him so she’s not haunted by it but she throws back that he doesn’t need to be haunted either.

They’re then ambushed by three people with hammers. One of them asks them to deliver Malcolm, calling him the “one true cursed” and also saying “for the undoing, the destroyer comes.” Well that makes no sense at all – so we’ve got a new mystery to solve. They fight – and the leader keeps chanting her lines even when stabbed in the stomach. Clay and Elena kill the four attackers. They all have the same brand on their necks (the same sign we saw the opening werewolf, Nate, run past) and Elena remarks on how they didn’t feel pain.

Logan questions one of the dead wolves’ fathers – but with respect and compliments. He wants to find Malcolm – because she has Rachel, his pregnant girlfriend.

Conference call with everyone but Logan to share information. Including that Malcolm is being funded from Russia. Malcolm calls Nick home. Nick fills Logan in first (who just happens to be drowning someone). Logan is out of the loop with the rest of the Pack – because he ran out on them (and his relationship with Rachel is technically against the rules) but Nick is feeding him info.

Rachel is being held by Malcolm, who has noticed his contacts going silent. They’re all prepared for a werewolf attack, when the electricity starts to spark on and off and we hear ominous noises. Just to complete the ominous omens, a crow flies into the house and into a wall. Dies. Then gets up and flies out again. Ok that’s ominous omen x1000. Then everyone gets nosebleeds. (Why are you still in the house!? I’d be in the next state by now!) There’s then a blinding flash of light.

When Logan arrives, he finds the house in complete disarray and splattered with blood. He finds several bodies – and the symbol painted on one wall. He questions one dying man who just babbles and can’t tell him where Rachel is. He’s joined by Clay and Elena. Elena found Malcolm’s faint trail, so he escaped

He’s on the road, more than a little shaken, with all his plans and dreams in ruins. Someone offers to give him a lift and as he leaves we see a car covered in bees. Two women in a car discuss stopping them, but the older says they’re too exposed, so they decide to follow. They use magic to track them and Malcolm kills the nice man who gave him a lift and steals his truck. Because he’s Malcolm

Back at Stonehaven, Jeremy introduces Nick – and his evidence – to Rodrigo who is enthused that they have evidence against Roman. But Jeremy isn’t so foolish – especially since Rodrigo has revealed knowledge no-one should know; they confront him and the fear smell just confirms their suspicions. They question him and he admits to financing Malcolm who is heading for Baton Rouge and that he is heading to Bangkok. He knows nothing about Rachel. Of course, if this gets out Rodrigo is dead – so they have some considerable leverage over the Spanish Alpha.

Clay and Elena put 2 and 2 together and realise the people who killed all of Malcolm’s Mutts were the same people who attacked them. Everyone heads to Louisiana to find Malcolm.

They arrive outside Malcolm’s bolt hole and Jeremy and Logan argue – Logan wants to leave with his son, Jeremy won’t let the boy, a werewolf, be raised outside the pack and plans to raise the child himself

Malcolm and Jeremy fight though Malcolm takes the time to tell Elena that something is coming for them while Nick and Logan look for Rachel. Logan can hear her voice but can’t find her – while the witches look on from a distance. Jeremy is ready to finish Malcolm off when Logan runs back – Rachel isn’t there they need Malcolm to tell them where she is.

They take Malcolm captive but he’s worried and wants to come with them quickly – he’s afraid of whatever’s hunting them. He also tells Clay that they need him alive for what’s coming with the ominous symbol. Clay believes his fear though Elena just wants Malcolm dead.

The witches decide to follow them back to Stonehaven. They hold a ritual with the younger witch in a circle, her eyes glazed white, communicating with another witch. She talks as Savannah, a woman imprisoned who they need “the wolf” (Malcolm) to save. She also mentions someone called Alistair who came back angry. She hears screams

And we move to a room where werewolves are being autopsied and Nate’s blood is being bottled in vials. Rachel is imprisoned in the room and a man stabs her stomach with a hypodermic needle.

It’s interesting that the opening is so brutal – but I think that follows on a lot from the first season. The Pack was attacked. It lost people they loved either killed or kidnapped. The Pack is now Done With This. The claws are out and the Pack is taking no prisoners – of course, underlying the Mutt’s initial concerns at the same time

The flip side is my same irritation with the first season continues: Jeremy. In the books, the defining characteristic of Jeremy’s leadership was that, while he was still dangerous and ruthless, he was significantly more compassionate and reasonable than the Alphas who came before and this show has done a really bad job of showing that

Ok, much as I rarely praise people running around torturing and mangling people, I do like this harder Elena. Maybe she needs reigning in with more thought as in the books, but equally I am glad to see she is ruthless, capable and dangerous because in a lot of the first season I didn’t see that. She seemed far too often to be a prize and a victim (and in the books as well) with odd moments of lethal action that never went far enough to counter that.

We’re getting more supernatural elements being introduced. On the one hand, this has a good chance of diluting Elena’s story but I always preferred the other supernatural beings in the Otherworld series so I’m a fan of this. There’s a definite feel of Stolen about this episode – which is why I’m trying to not mention spoilers or make assumptions (like the witches’ names).

I’m also glad to see that, like the first season, the nudity in Bitten is a lot more equal than many shows.