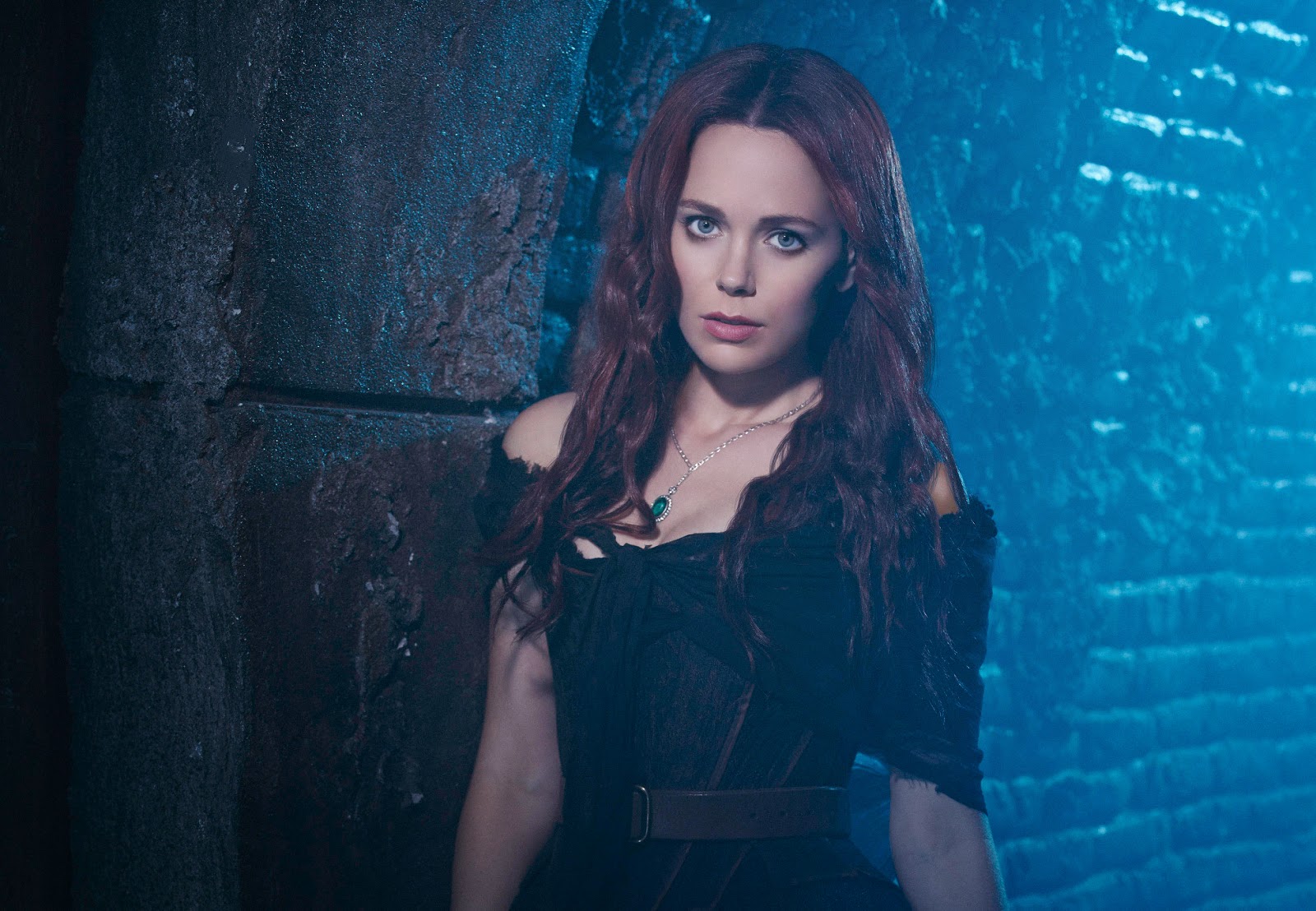 
Almost depressingly, the concept of Katrina is a very powerful woman. She’s a witch - one we’re told repeatedly is immensely powerful and not just magically, she and her coven were included in the plans of some of the highest ranking American leaders. She’s a woman whose moral convictions drove her to become a revolutionary, a woman whose convictions converted Ichabod in the first place. She’s also an able spy and agent against enemy forces. And all of this in a time and place where women were considered little better than property.


But from the very beginning of the show, Katrina has been de-powered. In the first season this was achieved by shuffling Katrina into Purgatory - she wasn’t a power, she was barely even a character. She was the damsel in her tower to be pined after by Ichabod, an object to save and rescue not a person to participate in the story. She was Rapunzel, only not even able to let down her hair, able to make brief cameos in which she did little more than appeal desperately without imparting any real knowledge or aid. It was a mockery of what she was supposed to be and had been during the Revolutionary War


This depiction, if anything, just became substantially worse in the second season. For a large part of it she swapped her prison in Purgatory for her prison with Henry and Abraham. And I’m being literal there since she actually chooses to stay with them - she chooses to be their prisoner in the mistaken belief she can actually be vaguely competent. Unsurprisingly, she is not. She doesn’t pretend to be a prisoner as part of her own scheme - she is a prisoner, she is their victim. Her pretence of being a spy or manipulative force in their camp is pure delusion on her part. Honestly, I can’t think if one single moment when she achieved anything while a prisoner and her imprisonment actively sabotages Ichabod and Katrina. She is quite literally kidding herself; she is a prisoner and a Damsel and only helps the enemy.


We have seen the prevailing Damselling of supposedly strong female characters before. Ultimately, no matter how much we’re told Katrina can or will achieve many things, she never does because she is not meant to be an active character while she’s a damsel. A damsel is an object, something to fight over, something to claim: an object is not an active character or an effective character she is there to be held and claimed. She could be replaced by a straw doll and achieve as much. No, that’s an insult to straw dolls - at least a straw doll wouldn’t actively sabotage the witnesses as she did.


This Damselling links into Katrina’s ongoing dis-empowerment. Again, return to Katrina’s original biography and consider how she could possibly have achieved so little as Abraham and Henry’s prisoner? How could this skilled spy who managed to completely shift Ichabod’s loyalty manage to make so little difference - so little effort - to affect Abraham and Henry? How could this skilled spy make only one attempt to contact Ichabod and Abbie and even then fail to actually convey any information?
How could she even call herself a spy? Doesn’t a spy actually have to… spy? Maybe? Perhaps? I wonder if she was actually a Revolutionary Spy or if she just sat in a corner and randomly claimed credit for stuff that happened while she stared angstily out of a window.
And a witch? Has she actually managed to pull off one useful spell? As a prisoner she achieved nothing and was quickly magically duped by Henry and Abraham into being impregnated with and raising an evil Moloch-demon-baby; even aside from being a witch, anyone who has the slightest ounce of common sense should know better than to nurture the evil demon baby no matter how sweet it looks! Clearly the corset and skinny jeans Katrina favours (is she actually trying to put together the most uncomfortable ensemble available from both eras?) are cutting off oxygen to her brain.
When free she was called upon to help face a haunted painting - in which her magic did next to nothing. She was called upon to cast a spell - which she couldn’t finish because she fainted and Abbie had to take over. She was called upon to magically check Frank’s soul and see if he was evil  - which failed badly. And she was called on to duel the warlock Kent - where she not only failed but was converted to the darkside by one single line. One line. I think of this scene like:


Kent:Come to the dark side, you will-
Katrina: Awesome! Totally evil now!
Kent: but… I didn’t even finish my pitch


It was less a seduction to the dark side and more poor impulse control leading to whimsically go dark.
Hey, but at least she managed to kill Ichabod’s ex! Um… yay? Score one to Katrina I guess? Demons, monsters, serial killers you might want to call someone else, but if you have an overly clingy ex, Katrina’s your woman!


Like with the persistent damselling, Katrina’s depowerment is a mockery of her supposed backstory. All of the great things Katrina’s coven was supposed to have achieved in the Revolutionary war seems even more patently ridiculous (and this is a show that adores the patently ridiculous) when we see how inept Katrina is. Was she the coven’s tea-girl? This weakness also, again, serves to make her an object more than an active character. She becomes something to claim and hold - and protect. Which brings us to another major issue with Katrina and how this all combines quite toxically.


Katrina is a wife, mother and love interest. These labels are firmly attached to her - and her whole depiction emphasises these labels to the point of overwhelming the other labels that should apply to her: witch, spy, agent, revolutionary, woman, person.


Katrina’s entire storyline is based around this. The first season where she’d damselled in Purgatory, she isn’t a powerful witch imprisoned. She isn’t an important ally to be rescued. She isn’t a mighty force in her own right. She’s Mrs. Ichabod Crane. Rescuing her is important not because of the power she can bring (thankfully given how little she brings) but because Ichabod loves her. By failing to show her being active, powerful or doing anything to help the Witnesses she is further pushed into this role. By de-emphasising her power and active participation so to do we de-emphasise those labels - we can’t talk about Katrina as a spy or a witch because she utterly fails at being either and her storyline rarely touches on her doing either. Being a witch and a spy doesn’t define Katrina, being Henry’s mother, Abraham’s love interest and Ichabod’s wife does.
When she’s a prisoner of Henry and Abraham, the storyline barely touches on her using magic or espionage against her captors. It’s all about her attempted maternal interactions with Henry and Abraham’s ongoing unrequited love for her (an unrequited love, we have to remember, which caused him to become the Horseman of Death in the first place. Not magic, or evil or demonic machinations - nope, being rejected by Katrina. Even this epic underpinning of the whole series is cast through the lens of Katrina’s relationship drama!). Even her one moment of effective witchcraft, killing Ichabod’s ex, was again all about her family drama. Her status as a witch has to be eclipsed by her overwrought family drama. The entire imprisonment became a family melodrama that is almost completely divorced from the actual plot and culminates in magical-demon-pregnancy and magical-demon-baby. Yet more family storylines, more Katrina-as-mother and more complete dismissal (and active rejection given how easily she is ensnared) of her power.


Even when she is freed, Katrina-as-mother and Katrina-as-love-interest eclipses any other aspect of her character. She sabotages the Witnesses with her endless motherly appeals for them to save or redeem Henry, despite his repeated evil acts and actually becoming the Horseman of War. In doing so she frequently hamstrings the Witnesses and even comes close to allowing the apocalypse to happen all because she is incapable to see Henry as what he is due to her role as mother. A role that, apparently, eclipses her role as person-with-the-common-sense-of-cabbage.


Even after Moloch’s defeat she continues to try and cosy up to the most evil, insisting they spare the Horseman of Death (because he loved her once apparently? Never mind that that jealousy drove him to the dark side so is hardly an indication of him being redeemable).


Ultimately, her descent into darkness and apparent villain-ness is, again, driven by her relationship with a man - Katrina-the-mother embraces her very very evil son and doesn’t even attempt to redeem him this time. She joins him in darkness. The last shred of what is supposed to have been a foundation of her character - rebellious morality that led to her converting Ichabod in the first place - is shattered in a confused, motive-shifting and generally clumsy descent into darkness chasing a son she hasn’t known since he was a baby. After 2 seasons of Katrina being a wife, love-interest and mother serving to depower her, it finally leads her on the path of full-blown villainhood.

Here we have, if not the key to why Katrina has been such an appalling character, at least a major element of it. Katrina has been pushed into the role of wife/love interest and mother and, through a deeply misogynist definition (or reduction) of both roles, it has consumed every other aspect of her. She is not allowed to be anything else and, within that limited definition of this framework, she is not allowed any empowerment. She is confined to these aspects and the writers have decided that these are inherently powerless, ineffective and/or irrational, weak and easily manipulated roles. It combines to both reduce Katrina as a person but also to reduce what it means to be a wife and mother and, ultimately, cast them as weaknesses.


We can only hope she will be a better villain.
Posted by Sparky at 9:00 AM