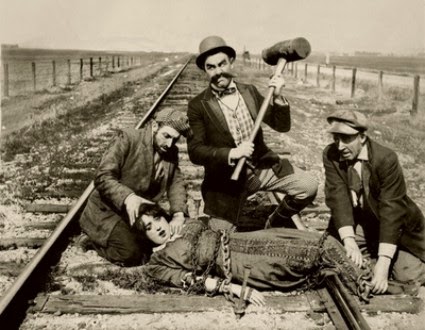 Urban Fantasy, as a genre, is no stranger to “strong female characters.” It’s not perfect, by any stretch of the imagination - we still have a lot of female characters who make us want to tear our hair out, and Spunky Agency is, alas, so common that we’ve run entire posts trying to decide which Spunky character takes the prize for the worst decision ever. We also have a lot of “strong female characters” who are little more than weapons with breasts - which often also comes with “strength” being misinterpreted as “anger management problems”.
So, yes, problems. However, putting these aside for a moment, this genre has no shortage of women who can kick arse, claw faces, chop off heads and, occasionally, throw various kinds of magical death. These women are dangerous. These women are lethal. These women can take on small armies and come out the other side with nothing more than a snarl on their face and a very big cleaning bill.

So, with all these kick arse female protagonists and main characters, why do so many of them end up in peril? Why are so many of them severely weakened, traumatised, rendered helpless and, in all too many cases, in need of rescue?

I’m using the word “peril” here for a reason. When I do a google image search for the word “peril” I get picture after picture of women largely tied up and helpless. (Even when removing deviant art from the equation). Peril, the way it is used in fiction, has very different connotations than “danger”. I would expect any Urban Fantasy protagonist to face danger on occasion, it’s an obvious part of many books with any kind of action in them. But “peril” conjures images of helpless damsels tied to train tracks while some mustachioed villain cackles over their helpless forms.

It is peril - weakness and helplessness - that differentiates this trope from the classic action-hero who gets terrible beaten up but keeps on going because they are just that tough and awesome. Or the action hero who is taken prisoner and cooly spits defiance at his captors even when they use torture and prepare the slow-killing-laser. We are not meant to be awed by these women’s ability to suffer incredible damage and still keep moving, we’re not meant to be impressed by the will of these women to keep fighting like Harry Dresden carrying on the fight while his hand is seared to the bone, or Atticus fighting on with terrible burns all over his body. Those are scenes that use danger to emphasise the protagonist’s strength - not peril to bring them low.

Kelley Armstrong’s extensive Otherworld Series is, perhaps, the poster child for this trope, so much so that her own characters even lampshade it - with Savannah commenting on how she’s starting to match Jamie in the number of times she’s been kidnapped (yes, the female protagonists in this book can have a kidnapping league. It’s almost unrealistic for them to be scared because it should be such a mundane occurrence). It’s especially vexing with Savannah because so much of the series emphasises her power (when it’s convenient to have her as a loose cannon) then we have two entire books where her power is stripped from her - and she is imperiled. Jaime sometimes manages to be captured and imprisoned several times a book but Hope could quite likely take the gold from her in the kidnap olympics. They’re truly impressive damsels. Elena is little better, despite her being one of the most lethal women in the series: being kidnapped in Bitten (where her plan involves running off alone to the bad guys to be captured because Spunky), the whole plot of Stolen revolves around Elena being captured and abused (after she drove off alone seconds after being warned of disappearing supernaturals because Spunky). Broken is another book that revolves around Elena’s peril (made more perilous by Elena being pregnant) exacerbated by her deciding to go see the bad guy alone (because Spunky).


In the H&W Investigations series, Shiarra is repeatedly imperilled - the books even open with her desperately seeking a loophole from an Imperiling slavery contract (which she stumped into because Spunky). Throughout the series she is repeatedly targeted and captured twice by an enemy big bad - who abuses her in a way that is very close to sexual. The whole plot of Enslaved by the Others is about her being rescued from Peril.

The Edie Spence series has Bloodshifted which has a similar theme - the central plot is about Edie being captured, abused and seeking escape and ultimately being rescued from desperate Peril. (At least in her case spunkiness isn’t the cause of her peril).

We see this rise yet again in Yasmine Galenorn’s Otherworld Series, with the central plot of Courting Darkness all being about Camille’s kidnapping, imprisonment, abuse and rape.

Mackayla Lane’s own Spunkiness in the Fever series leads to one of the most revolting imperiling’s we’ve ever seen - with Mackayla abused and raped by the enemy to be rescued in Dreamfever by the big strong man who promptly rapes her back to health. No, really.

This doesn’t even touch on the examples provided by Paranormal Romance where imperiled, weakened women repeat over and over again - some series of which we’ve already written entire posts about.

Even Kate Daniels, one of my favourite protagonists of any series (and a stark reminder that tropes exist in even our most favourite of series - indeed, many of these examples come from books, series and authors we have enjoyed and loved) had to be rescued by Cullen, twice. Yes she’s awesome during the rescue - because she’s never not awesome - but she still needs rescuing. If these were isolated to Kate’s story it would work and it wouldn’t be an issue because Kate’s story contains so much of her strength over the series - but this is how tropes work. Kate’s kidnapping and rescue does not exist in isolation from the meta-trope that is found throughout the genre - it is both stained by it and adds to the stain and is a classic example of why tropes can be so damaging

While many of these women manages to pull themselves out of the perilous situations they were in, it was only after they had been truly weakened and imperiled. More often, they only manage to extricate themselves with the help of others (often - usually - a man) or even by being outright rescued.


That is just one trope that weds unpleasantly with the Imperiled Super Damsel trope - I’ve repeatedly referred to Spunky Agency in this piece for a reason; a lot of these women are imperiled because of their own foolish actions. This toxically combines to make their agency dangerous, their capability lesser and often leads to men rescuing them from their own silly silly ideas. She may be a Strong Female Character, but she still needs a Big Strong Man to save her not just from others, but also from herself.