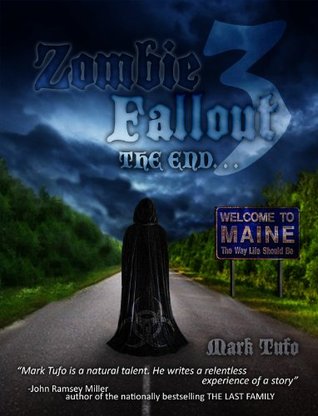 Pulled back from the brink of death, Michael Talbot is determined to protect his loved ones against not only the zombie plague, which has taken over the planet but the threat that Eliza, the vampire holds.  Even a reinforced military base may not be enough to keep her at bay.  The government may have Humvees,  heavy artillery and helicopters loaded with missiles, but Eliza has an ace up her sleeve.  Talbot depends on Tommy to give him the right information at the right time, but their pop tart loving guide, who hears Ryan Seacrest in his head, might not be as innocent as he seems.

I cannot believe I made it through all three hundred and fifty-five pages of this novel.  I am telling you right now Fangs readers, you owe me one.  Michael Talbot continues to be an epic Gary Stu.  Everyone around Talbot exists to constantly prop him up, and follow his lead.  Even Alex and Paul, who have decided to travel in a different direction than Talbot, in order to find their families and avoid Eliza's clutches, spend their time chastising themselves for leaving Talbot, while  talking about how amazing the trained marine is and alternately angsting about their disloyalty for abandoning Talbot in his hour of need. Brendan even pays for his abandonment of Talbot  and the questioning of Talbot's leadership with his life.  No one even bothers to try and think up any kind of plan on how to survive because they are all sure that somehow, Talbot will pull their asses out of the fire.  Of course, Talbot has to get up to some practically superhuman shenanigans (that is when he isn't being saved by the family dog) but he somehow constantly manages to save everyone because that's what a man does - save his family. I spent much of the book hoping that a zombie would eat Talbot.

There were quite a few female characters in this book but luckily, there really is no real need for them to be strong characters, when they can depend on Talbot.  Tracy, Talbot's wife, is still alive and kicking but she never really gets into the action.  Why would Michael bother to teach Tracy a practical skill like shooting a gun, when he can take his teenage sons out on missions against the zombies.  Surely, a teenage boy has to be competent than an adult woman and besides, it teaches the young men that their job is to protect the womenfolk, just like dear old dad. Mike constantly acts like he is afraid of his shrewish wife but at no point does he bother to consult her for advice.  Tracy exists to give Talbot something to save and is only humanized when dealing with her mother Carol, who has suddenly become frail and in need of Michael's protection, despite surviving by herself on a farm at the beginning of the apocalypse and her son Justin, who struggles to fight back against his link with Liza.  Carol however does end up earning her keep, by pushing Mike's sister Lyndsey out of the kitchen.  Everyone complains loudly about Lyndsey's cooking and none louder than Mike but since his job is saving the world, actually entering the kitchen and cooking for himself is inconceivable. Besides, it gives the women something to do while they are waiting to be saved.

Then we have Nicole, who from the sounds of it is about six weeks pregnant.  Nicole at this point is practically an invalid, who spends most of her time puking and expressing some kind of weakness. Nicole is in a sense nothing more than a walking womb but she's precious because she carries the future of the Talbot line. Nope, I couldn't make this shite up if I tried.  This is par for the course because daughters are trouble - something Mike knows all to well.


Rachael is 10 and she is my only daughter.”
“Be thankful for that.”
The doc wouldn't understand the backhanded compliment at least not for another two and a half years when his daughter turned from a sweet daddy’s little princess into a multi-headed demon from hell, as all teenage girls must.
“She is without a shadow of a doubt, the strongest personality in our house. She is the most wonderfully devious of children. If there is trouble to find, she's not only in it but in it to win it.”
I had learned the hard way after punishing my own boys way too much, that my daughter not only sought out trouble but was usually the root cause of it.
“Rachael's very smart but loves to tell you that she's not (the better to get away with things). She is a mini version of her mom, entirely too cute to be as cunning as she is. She scares the hell out of me because she is going to need to be locked in a closet VERY soon.”
Maybe that secret desire of all fathers to be able to lock their daughters away from testosterone infused boys could now be realized. So maybe a zombie invasion wasn’t all bad.

Women in this series exist to be shrews like Tracy and Mrs. Devereaux, wild precocious teenage girls  in need of taming and weak victims in need of propping up like Carol, that is when they aren't in the kitchen doing their biologically mandated job.  Yes, join me in a good eye roll.

The only character of colour with a large presence in this novel is BT (Big Tiny). Tufo did finally reveal that BT's name is Lawrence but somehow, BT finds the name Lawrence embarrassing We are constantly reminded not only how big BT is, but how Black he is as well. He isn't really a person just a caricature of one.

“It’ll heal, in fact it’s done remarkably well in this short time span. I’ll probably always have a limp, but that just works in my favor.” When he didn’t answer I asked. “How so?” Knowing I was walking into a set up trap.  BT flashed a smile. “Now I won’t have to work so hard on my pimp walk.” (pg 35)

Throughout the novel, BT faces racist attacks from Durgan but they serve as a part of a comedic routine  and to make sure that the reader is aware that Durgan is indeed a bad person.  I am not against racism being included in a story, as this is something that POC have to live with and most certainly would not have disappeared the moment a zombie apocalypse started.  The problem is that it becomes a cheap plot device in the hands of Tufo.  Alex (the Handy Manny of the series) only appears in the novel for a short bit at the end but of course has to undergo a racist assault by none other than Mrs. Devereaux, to remind us of course that Mrs. Devereaux is a horrible person and that Alex is Mexican.

Almost every person who is to be read as bad is a racist.  It seems that for Tufo, it's the only way to ensure that the audience understands that we are not to like the character.  After all, choosing to side with an evil vampire, who is determined to bring death to our favourite Gary Stu,  and partnering with the zombies of all things, might not be transparent enough.  Our Talbot, is a special man, who isn't at all problematic in anyway. (yes, that's snark).

I was not comfortable walking among the dead, even with the Zombie Off. Hell, anything less than being surrounded by the four-inch thick steel metal of a tank wasn't going to make me feel secure. One overly hungry zombie could ruin our day. I know it made absolutely no difference but I made sure that we stayed away from the fatter zombies. I figured if any of them might be a little hungrier than the rest it would be them. I guess I was being a sort of zombieist. I had always prided myself on not being any sort of racist bigot. I figured I should be able to gain absolution for this transgression though.
The zombies paid us no attention. We might as well have been white trash entering a Neiman Marcus and the zombies were salespeople. (pg 124)

So what if Talbot thinks that the only thing worse than zombies learning to drive is a "drunk Asian woman on her cellphone" (pg 96) The narrative of the tough Gary Stu, tasked with protecting those closest to him from the zombie apocalypse must be maintained.

So far, I have touched on age, race and gender and would you believe Tufo still has room for more failure. In  Zombie Fallout,  we met Tommy, the neurologically atypical Walmart greeter, who hears the voice of Ryan Seacrest in his head. Tommy continues to eat consistently throughout this novel, somehow magically pull pop tarts out of thin air, in between doling out his magical advice   In The End, Tommy made a new friend - Porkchop.  No, that's the name of a new pet, that is the name of his new disabled friend.  Porkchop being disabled and chubby like Tommy, is constantly eating.  Porkchop sticks around long enough to provide some cheap humor and is then shuffled off to the plot box.

Thankfully, with the death of Jen, in A Plague Upon Your Family, there were no LGBT characters.  Normally, I would say that erasure is not a good thing but after watching as Jen's character was referred to as a "man hating lesbian" and a "waste", erasure was simply the kindest thing that Tufo could have done for the GLBT community.

Even if I could overlook all of the problematic elements in this story, as it relates to the marginalized characters, there is still the issue of the constant bathroom humour.  There is barely a chapter in The End, which is not filled with some crude commentary regarding, feces, fart, urine and of course vomit.  It makes the novel feel as though it was written by some short on imagination teenage boy, instead of a grown ass man. There were times that I was so disgusted, I literally had to put the book down and look away.

This review is essentially a public service announcement because having read the wonderful reviews The End received on Goodreads, I have begun to question whether Tufo has engaged in something nefarious, to trick this people into believing that The End, should be used as something other than toilet paper. Even as I write this, I am still trying to scrub my brain of what it has been subjected to.  This book isn't fit to print, appear on any tablet/ e-reader or be consumed in any manner whatsoever. It's an assault to the senses and must only be approached with the highest of caution.  Fifty years of smoking pot, would do less damage to the brain, than reading 5 chapters of The End.  Consider yourself warned.