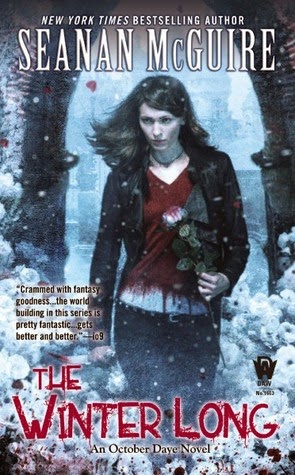 October has a long and difficult past – but at least she understood it. She’d also left a lot of it behind – she had a new life, new loves, new friends and was an honoured hero of the kingdom

But when old, long vanished people return, she quickly learns nothing was how she imagined it – and people close to her have been keeping vital secrets about her life, her past and her family

This book hit that wonderful sweet balance between EPIC and PERSONAL which is very hard to do.

We have a lot of epic because the antagonist is immensely powerful and threatens pretty much everything October knows – including the entirety of North America. She is vast and all consuming and not a power that October can reasonably match. More, this series is truly excellent at invoking the great forces of faerie, it really conveys the epic power of these beings as well as their truly alien, unknowable nature. When this series decides to bring out an epic power, there is absolutely not doubt at all how powerful it is – everyone one of the epic faerie forces has a sense of age and power that is really well conveyed even when showing their oh-so-human frailties as well. The book never really forgets what they are – epic, powerful, the stuff of legend. It’s what I’ve always loved about this series and this book doesn’t disappoint.

On the personal side – much of this book covers a lot of October’s past. Way back at the beginning of this series we knew October had recently been cursed by Simon and that this had seriously disrupted her life; Simon had also gone on to cause some trouble for Sylvester, October’s liege’s family as well. But his motives (and, relatedly, Oleander who also showed up to cause havoc) remained very opaque and in the later books we’d moved so far beyond that period in her life that it was rarely remembered. In fact, every now and then October would mention something like her fear of water and I’d suddenly remember. That isn’t a criticism – the October of The Winter Long is a very different person from the October of Rosemary and Rue, she has grown a lot and the things that once were such major issues for her have faded and been replaced by the far greater and more epic. But that growth and development makes it all the more important (and fascinating) to revisit October’s past with new perspective, knowledge and power, filling in all the gaps about her old friends, allies and enemies (and people who have moved from one category to another as well). I can’t say much more than that because I’m risking spoilers – but it is epic and fascinating and really adds to October’s backstory. And adds a whole lot more mystery to October as well – I really want to know who her grandmother is.

We also have some interesting world building on the Liudaeg who is definitely a favourite of mine – and also the interesting bindings that can restrain even the greatest and mightiest of the fae. It’s a really nice balance of surprising weakness in beings that are so incredibly powerful. There was other interesting world building elements, including what it means to be a child of Titania or Maeve (the two great fae matriarchs) with added elements of marriage in fae culture – and just what a faerie race’s First Born actually means to them.

I can’t say any more – because any spoilers would be unacceptable – but this plot line grabbed me and pulled me right in and just left me wanting more.

All of that does say a lot about how October has grown as a character though – she’s an excellent protagonist, an excellent hero (in the most literal and awesome sense of the word) and she is surrounded by excellent characters with depth and back story and a whole lot of realness that I appreciate.

I also really like her romance with Tybalt – it’s touching and meaningful. She absolutely refuses his protective smothering while giving a nod to the caution he injects into her reckless self. She also has a powerful sense of priorities – and getting naked with the King of Cats does not take precedence over whatever dramatic, all-consuming epicness is currently happening

My only issue with them is the brevity of their appearance. Li Qin is a minor character so I expect that, but May and Jazz actually live with October. They’re great characters in so many ways and I love when they appear at the beginning of the book – then they’re shuffled away to safety and reappear at the end of the book – which is kind of a pattern of this series. I love that October cares enough about them to want to keep them safe and I love that, unlike so many LGBT characters in fiction, they’re not reduced to sidekicks who exist only to serve the protagonist – but it does mean they get very little meaningful presence in the plot. Certainly when compared to Quentin or Tybalt or even Sylvester. Raj is another POC character and he is more involved – I’m pretty happy with how the prince of cats has become more and more involved in the series

There’s just so much here and I can’t tell you any of it without spoiling! And behold proof of awesomeness – not just a book you shouldn’t spoil, but it’s a book that’s awesome enough that I really really want to spoil it because I want to talk about it