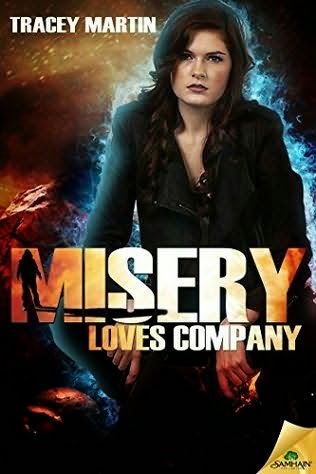 Jess decided she was going to have nothing to do with the Gryphons any more, regardless of their blackmail, not after what she learned about her childhood

That’s until her best friend Steph’s cousin is turned into a ghoul by the Goblin who owns his soul. How can she refuse to be involved in the investigation and turn her back on her friend?

Of course, going back to the Gryphons isn’t helping her rocky relationship with her satyr boyfriend, Lucen, who wants her to accept the multiple sex partners that are necessary for satyrs. And that’s before she tackles her own conflicted feelings about her own Pred heritage.

Looming over all of this, several prophecies are aligning – and the end of the world may be nigh.

This book is moving the story to a whole new level – in some ways it’s a transition book; but usually that would mean a weaker novel but that’s far from the case here. It feels like Jess has reached the end of her journey of self-discovery and all the conflict there and it has been done excellently. I’ve loved every step of that.

On top of that we have an introduction of the next stage of the meta-plot – the ominous prophecies we’ve been hearing for a while. We can see this looming, it has been introduced and the series has some excellent deduction

And, among that, we have a decent mystery that is both personal to Jess and relevant to the meta-plot but still stands up sufficiently on its own to make sure the book isn’t all about setting up the next book. We have an investigation, a clear book-specific story arc as well.

All three of these elements are really well balanced, really well paced and work extremely well together – it made the book fun to read while still serving up plenty of hooks for the fourth book.

On top of all this, as I said in the previous books, the world building of this series – the Preds and their feeding on different emotions, their forming of circles of addicts – is really original. I love reading something so very different from everything else I’ve read

The cornerstone of this book is Jess’s identity issues and they’re complex and really well done, especially how it relates to the greater world building. Jess was raised as a human, raised, like most people, to hate and fear Preds and even aspired to join the Gryphons, a kind of magical police force that exists to control and, at one time, war against the Pred races. But she has learned that, no, she isn’t cursed, she’s a pred. She’s a kind of satyr. And she’s a satyr because a segment of the Gryphons experimented on her and others while they were children – which has definitely flipped the script she’d always lived by as to who the good and bad guys are.

But it’s not just simplistically flipping the story over. After all, the Preds ARE predatory, by definition they’re predatory, they do prey on people, they do addict people, they do use people and a lot of people suffer because of their supernatural hunger. But nor are they entirely monstrous as we see their society does have rules (albeit not always closely adhered to) and many Preds do their best to cause minimal damage while feeding hungers they cannot avoid (at the same time, the choice to become a Pred is generally that – a choice – so even one who is very moral and kind with their addicts can’t be considered completely free from blame). And, of course, Jess knows several Preds who seem to be good people – on top of that it’s rightly pointed out to her that Jess is a Pred who avoids many of the downsides of being a Pred since she isn’t physically identifiable as one (satyrs have horns) and she doesn’t need addicts; in some ways judgement from her comes from a position of great advantage compared to her fellows. And flipping back to the Gryphons, we’re equally clear that they’re not all brutal fanatics and they do have an important role to play in maintaining order and protecting people and she isn’t able to write off the organisation because of the inexcusable actions of one.

Throw into this we have some excellent personal elements for Jess – her friend Steph’s condemnation of Preds and need for Jess to work with the Gryphons is one element of very personal pressure. And we have her relationship with Lucen pulling the other way which also brings up Jess’s own human upbringing and how her sexual morality clashes so much with the necessary open relationships that satyr powers requires. She clings to standards of monogamy that Lucen simply cannot meet which is very difficult to reconcile.

All of this comes together in an excellent conclusion I won’t spoil, but it draws on all of her conflict and torn identity together and makes it an asset for the future series and leaves Jess in a much stronger position and much more self-confident with herself. It’s a very satisfactory conclusion to this whole conflict

There are a couple of shaky elements in this book – firstly, Jess is being pushed over and over to sleep with other men. Yes, this is satyr culture and she needs to realise that Lucen cannot be monogamous – but I can’t see the solution being pushing Jess to have sex she isn’t comfortable with. Now, her sitting down and challenging whether the morality she has assumed is valid to her or right etc – but there’s a difference between that questioning and feeling pressured to have sex with a random guy. At least her actually having sex with other men is left to her making the first move and there is absolutely no shaming of her for it.

There was also a little element of comparison between Steph being a trans woman and Jess being a satyr. There were lots of small hints but on the flip side when a direct comparison was actually made, the book is also quick to shut it down and make it clear it isn’t right to compare being trans to being a supernatural creature that frequently preys on humans. So it does subvert it very overtly – but only after numerous not-very-subtle parallels.

But Steph is generally a great character – she has a stable and happy family. She’s skilled, caring, loyal and competent. She seems to be lacking in any real stereotypes that dog the very very very few trans characters out there. Her family are intolerant and transphobic, and they’re clearly labelled as extremely out of line and blatantly bigoted and that Steph is a much better person than them. I like Steph, she and Jess have a great relationship and in previous books she has been involved in the plot and I hope she’ll continue to do so.

All satyrs are presented as bisexual but for most of the series (which isn’t ideal because it does link bisexuality with predatory sexuality) we haven’t seen much of this – but in this book we had more of Angelia who is bisexual and focuses on female partners. She’s also presented as kind and a growing good friend to Jess – she’s also blind adding a decent and sexual disabled character to the cast which is quite rare to see. I like her and hope she continues to be a regular inclusion

In terms of POC we have Olivia head of the Gryphons and Dezzi head of the satyrs. Both are repeatedly shown to be very very good at their jobs, extremely competent, caring, compassionate, wise and generally superlative. I like them a lot and hope both will have bigger roles in the future (there is a minor edge of promotion to obscurity here).

This book is a turning point for the series – Jess and the various organisations she’s part of are all embarking in a new direction, many of her older issues have been addressed and nicely resolved rather than being dragged on: the series has had three books of excellent introduction and character establishment and brilliant world building  - and now the meta plot is landing