Review: Broken by Kelley Armstrong. Book 6 of the Otherworld Series 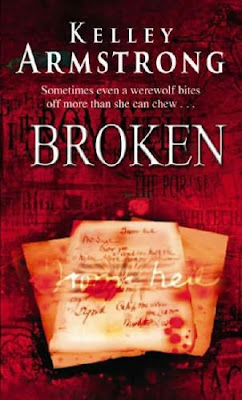 Elena, Clay and Jeremy are contacted by an old acquaintance – Xavier, the Half-Demon guard from Stolen. When she was in the compound he did her a further, the debt remains unpaid. Of course, Xavier knows better to hold the debt over a werewolf so he offers them a deal – he helps them again in finding a rogue werewolf and they help him steal a letter – the From Hell letter connected to the Jack the Ripper case that is in a Sorcerer’s private collection.

It seems like a simple snatch and grab, albeit one that requires the werewolves’ unique abilities. But when they get the letter free, they find it is far more than it seems, with portal placed within it. From out of the portal a little of Victorian London comes through – including cholera, aggressive rats, and possibly Jack the Ripper himself – and a couple of zombies. All unleashed on an unsuspecting and unprepared Toronto.

The pack has no ties here, but is faced with a disaster they are responsible – but how much do they risk to fix it, especially with Elena being heavily pregnant?

I actually like the fact that this story is based on the characters screwing up. Seems odd to say since I often rail against character foolishness. But their screw-up isn’t based on (much) foolishness, there was no way, with their state of knowledge, that the characters could possibly have known the consequences of their actions. Even if they did know about Sorcerer magic, there’s no way they could have guessed or reasonably have expected the From Hell letter to be a part of that. It shows characters who are not perfect, are faced with major consequences that are their fault – and that they have both guilt and responsibility for. And it shows that sometimes, even with the best intentions, shit happens. It shows that characters can actually get it wrong and be flawed WITHOUT being Too Stupid To Live. Even when it’s character like Jeremy, renowned for his near perfect intelligence and planning, he can still be caught off guard by his own ignorance – no character is perfect, no-one knows everything and everyone can screw up without us having to shatter believability.

I also think they did a very good job of covering both reasonable guilt and responsibility without everyone curling into a small ball and wailing at the angst of it all.

The story was well paced, which is something I love about this series. They’re never rushed but never does the down time feel like it’s dragging or dull – which is especially hard to do in an investigation. Though there are leads that don’t go as far as expected (because no investigation does) each adds its own twist to the story and advancing the plot. We were introduced to some new characters including Zoe who is pretty fleshed out – and we ship Jaime in who is always a favourite of mine. With all these books just seeing all these characters we’ve come to know interacting with each other is great fun and seeing the full story and relationships develop really adds to the world. And through their helping each other we learn more about ther abilities, more about how the structures work without ever having to resort to info dumping or lecturing.

It was also interesting returning to the werewolf pack after the break with Paige, Lucas and Eve, so much time has passed and it would be interesting to see what had changed and evolved. And I do like Elena and Clay as characters when Clay isn’t playing Neanderthal man and epitomising the Hauptman Effect, which, to be fair, he didn’t in this book beyond the hovering over Elena’s pregnancy. The problem is I don’t think a lot did change and evolve from Stolen – yes there’s a lot easier relationship between Clay and Elena but, at the same time, everything is eclipsed by the huge great spectre of the ZOMG!PREGNANCY meaning that relationship, and the wider relationship with other pack members doesn’t get much showcasing.

The main glaring problem I have with this book is, well, the entire concept.  Which is basically “pregnant woman is so helpless and weak and incapable”. Even the title of the book – “Broken”. She’s pregnant, not injured! There’s a mosquito – zomg she could get the pregnant lady lurgy – get her away! Argh the enemy has syphilis, save the pregnant lady! Is that water bottled? NOOOO THE PREGNANT LADY! And she waddles and stumbles and can barely move and we’re constantly reminded that she could do X, Y, Z if only she weren’t pregnant!

It’s not just the fussing of Jeremy and Clay, as inexperienced, worried menfolk going over the top to shelter the poor, delicate pregnant lady – no, she is presented as being objectively helpless and incapable.

It’s especially galling when he consider how capable, how hyper capable even, Elena normally is. And, of course, she gets kidnapped. Again, she gets kidnapped. It seems every female protagonist in this series has to be kidnapped at least once per book – with extra bonus this time because she is kidnapped because of her pregnancy. Elena also does the classic Spunky move of agreeing to a plan between the pack and then deciding to sneak off on her own (after a book of establishing just how incapable she is) without telling anyone. It would be bad enough when she does this, but it doesn’t help that every time she decides to sneak off on her own her plan is always so utterly ridiculous.

We do have some other strong female characters, though – with Anita being capable, independent and having her own agenda that doesn’t necessarily line up with the protagonists. And Zoe Takano is both a POC and a lesbian – but she’s also extremely incapable for a vampire, spends much of the book flirting with the disinterested Elena and, yes, ends up being a victim that needs saving. Though she has her own motive for stopping the disaster in Toronto, she’s also rather dragged into Elena, Clay and Jeremy’s storyline.

We do have disabled people in the form of Necromancers who have lost themselves - but it is played as the worst, most dire future a necromancer could face to an extent that the person is not even seen as human at the end of it.

The series is just very erased for what it is and it has a major problem with both spunkiness and super-damselness which is a real shame because the characters are interesting, the world is broad and fascinating and the plot never fails to keep me riveted.It's a fun read that continues to develop this awesome world that Kelley Armstrong has created that just gets richer with every passing book.