Review: Passion by Lauren Kate, Book 3 of the Fallen Series 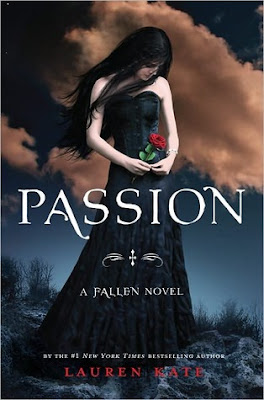 After leaping through the Announcer in Torment, Luce meets up with Bill, the totally-not-evil-honest gargoyle and goes for a guided tour of her past lives seeing how she falls in love with Daniel over and over and over and over again, only to be immolated horribly when she does. Then she gets to see Daniel be utter mega sad by said immolation, before finding the next Luce fire-lighter for twu-lub. During her travels she discovers how much Daniel loves her, how very sad the curse is… and not much else.

But there’s some plot tacked on the end of the book just to stop you losing all faith in literature. I’m certainly losing faith in recapping.

My main frustration with this book is that it wasn’t until 80-90% in that it actually became relevant. Before that we just get a rehashing of what we already knew.

The premise of this entire series is that the angel Daniel fell in love with a mortal girl (Luce) many many thousands of years ago (falling because he loved her) and was so cursed that when she reached her late teens (usually 17) and fell in love with Daniel she would promptly burst into flames. Then she would be reincarnated and 17 years later the cycle would be repeated. So every 17 years, she doesn’t remember him, falls in love then dies leaving him all sad and tortured. This is the entire concept of the books and something we’ve been introduced to in book one and held during book 2 – they’re in love but that love has always ended tragically over the millennia because of the immolation death thing. Very tragically romantic, I guess.

It’s not like it’s even establishing a pattern here because we already knew this. We’ve known this for 2 books, you’ve told us and better told us. We didn’t need an entire book of past love to know Luce and Daniel are in love. We didn’t need an entire book of tortured Daniel to know Daniel is sad and tortured (and completely unable to STOP hanging around Luce incarnations so maybe, just maybe, she could live to a decent age for once).

Even finding out the reason behind the curse is undermined because the answer is “God did it”, not only is that the answer but Daniel knew this all along – but the habit of the entire cast mushrooming Luce for no good reason means she didn’t know that. And if Luce intended to put a loophole in the curse? Well, no need because Daniel does that as well (and since it’s his past he must remember that he did that too!)

The ironic thing is that she actually entered into this magical mystery tour of the past because she worried that Daniel didn’t really love her – just the idea of her. This was actually a legitimate worry – after all, Luce and Daniel barely know each other and he is basing all this love on the concept rather than who she actually was. Now why the irony? Because after seeing a gazillion examples of Daniel loving past incarnations of her she is convinced that Daniel’s love is epic and true and mighty – DESPITE every one of those incarnations having entirely different upbringings, cultures, personalities, etc Daniel loved all of them. In short, she decided that Daniel did truly did love her for being herself despite receiving vast evidence that her personality and person was completely and utterly irrelevant, Daniel would always love a Luce-shaped person regardless of who that person was.

Let me repeat that for clarity and head-desking – she was worried he only loved her soul, not who she actually was, had confirmation that her personality was irrelevant, so concluded that he truly loved her and there was nothing to worry about. Well I suppose it helps that a good half of these relationships revolved around "I saw hikm and then TWU LUB STRIKES!"

Now to my agency complaint. I have hated that in the 2 previous books Luce was dragged around by all and sundry not having any real influence or control of her own life. This was especially glaring in Torment  where not only was she restricted at every turn by people who had very dubious authority over her, but her attempts at agency were all extremely spunky. Probably epitomised by her decision to jump into the time travelling announcer at the end of the book. So this book, we have Luce separated from her normal keepers – maybe at last we’d see her make her own decisions? No, introducing Bill, the annoying little gargoyle with evil written on his forehead (no, I’m not going to warn for spoilers because anyone who is capable of understanding the English language sufficiently well to actually read this book should be intelligent enough to see the obvious villainy of Bill. In fact, Luce’s decision to trust Bill implicitly on first meeting is just further proof that this girl shouldn’t be allowed out on her own). Luce spends most of the rest of the book doing pretty much what Bill tells her to without question. Until the end when she is swept up by Daniel and back to her old life with much gooey protestations of love

And if the time-travel wandering had entirely been Luce’s choice it’s still rather derailed by them reaching the end and the big nasty plan of the big nasty bad guy which pretty much renders all of Luce’s personal angst (and this entire book) somewhat irrelevant.

Inclusionwise we only have 2 real characters in this book – Daniel and Luce. But they go through all kinds of time periods including having past lives of POC. There is so inclusion of culture and Lauren Kate has clearly picked up a history book, but there’s also some level of exoticism going on here as well. It’s preferable, though, to trying to squeeze in 6,000 years of reincarnation through the lens of White People which would have been historically odd and pretty much impossible. It was much better done than I expected and I was pleasantly surprised.

I finished this book and felt a) relief that it was over and b) a sense of utter pointlessness. Until that last 10% (which doesn’t even really involve Luce and Daniel) nothing relevant happens, no plot is advanced, no characters are developed, nothing appreciably changes. You could pull out the last 10% (or less), tack it onto the front of the 4th book and ta-da, done. Rest of the book can go in the recycling.

I also just discovered there is a 4th book to the series. I thought this was a trilogy. Damn, and i got my hopes up as well