Wednesday Reboot: Shaun of the Dead 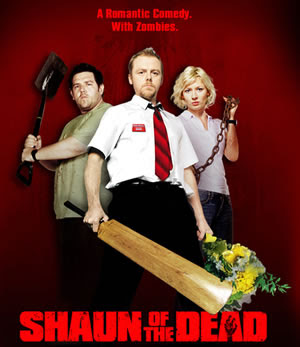 Shaun of the Dead was released in 2004 and stars Simon Pegg, Nick Frost and Kate Ashfield.  Shaun of the Dead is yet another zombie movie that attempts to be a romantic comedy.  Shaun lives with his three roommates.  He has a girlfriend but his life is truly disorganized.  He spends much of his time drinking at the local pub or playing video games with his life long friend Ed.  Everyone around Shaun blames Ed for his failure to get his life together and this includes their other roommate Pete. For his part, Ed does nothing but sell drugs, and play video games for a living.

After Shaun fails to make a reservation at a restaurant for  himself and Liz at a fancy restaurant.  The only future she can see with Shaun is getting drunk night after night at the Winchester.  Heart broken that he could not convince Liz to come back to him, Shaun and Ed proceed to get roaring drunk at the Winchester.  When Shaun wakes up the next morning, after stumbling around unaware for awhile, he learns that a zombie apocalypse has happened.  The news suggests that everyone should stay indoors and away from infected people but all Shaun can think about his is mother and Liz.  Ed and Shaun decide to go and get them and then head to the Winchester because Ed wants to end up some place that he knows and where he can smoke.

When they get to Barbara's (read: Shaun's Mother) place, she refuses to leave because her Shaun's stepfather Philip does not think it's necessary. Shaun tries to get his mother to leave Philip behind because he has been bitten but Barbara will not hear of it.  They get into Philip's jaguar and head for Liz's.  Once there it takes some convincing but Shaun manages to get Liz and her two roommates Dianne and David to accompany him.  Before agreeing to leave however, Shaun and David have another argument about David being in love with Liz.

By the end of the movie, much of the people are dead, having been bitten by zombies.  Philip who has never gotten along with Shaun makes his peace before he dies, sharing that he loved Shaun and only tried to give him direction in life. Shaun has a particularly emotional moment when after being bitten, he is forced to kill is own mother.  Throughout the movie Shaun makes comments about being a couple with Liz which she continually denies until the very end.

For a movie that was meant to be a romantic comedy, I didn't really find it remotely amusing. The apocalypse only existed to make Shaun a suitable mate for Liz.  After displaying that he could protect her in even the worst situation, she suddenly decides that he is a worthy boyfriend.  Barbara, the other woman in Shaun's life is ridiculously obtuse.  Even though the world is falling apart around her and she sees the zombies with her own eyes, she steadfastly refuses to acknowledge what she is seeing.

People of colour are reduced to background characters.  They appear as zombies and as a convenience store owner.  Somehow we are supposed to believe that this is London, though it is largely White.  To add insult to injury, when Shaun runs out of Liz's apartment looking for Ed and the jaguar, he pulls up and says, "What's up niggers?"  Why in the world would the writers and producers believe that this language was even remotely amusing when this word exists for the sole purpose of attacking and oppressing Black people?  It doesn't suddenly become funny when a White man uses it to address a group of White people.

There are no GLBT people in this movie whatsoever, which again is ridiculous for London.  There are however disabled people as background characters.  In a scene outside of the Winchester we see a disabled zombie rolling by in a wheelchair.  I have to admit that this was a first or me. Normally when it comes to this sort of dystopian fantasy disabled people are erased.  I am however unsure of how much of a step up it is to have disability represented by a zombie.

In the end the military steps in and re-establishes order. The zombies are put to work doing service labour like returning shopping carts.  They also appear on reality television for the entertainment purposes of the living.  Ed, is kept chained up in the shed where he continually plays video games.  And of course, Shaun gets the girl.  As endings go, I suppose it's alright even if the idea of zombie slaves is truly unappealing.  Look out at the end for a cameo appearance by Cold Play. For what this movie is, it's not bad.  I wasn't entirely bored but I wasn't entertained either.