The Strain by Guillermo del Toro and Chuck Hogan, Book 2 of the Strain Trilogy 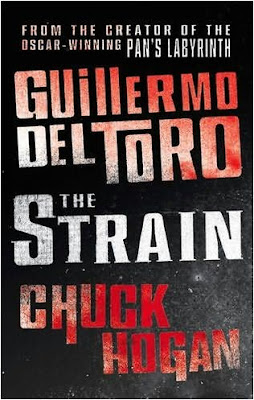 Dr. Ephraim Goodweather works for the CDC out of New York where he is determined to stay so he can be near his son over which he is desperately fighting with his wife for custody. It’s difficult to balance his work with being a good father for his son, who is his life.

And it’s certainly not made any easier by a plane landing and going silent – with all passengers on board silent and, it turns out dead. Temporarily anyway.

This story is so completely new. A combination of vampire story with zombie apocalypse. And it’s also taken from an interesting point of view – a doctor in charge of disease control when the outbreak resembles a disease more than an invasion. It has a very rich history and world setting that is not only fleshed out and fascinating but also hints that there’s a lot more to come.

There’s fascinating questions of doctor becoming killer as the only cure for the vampires is to hack off their heads or otherwise kill them. The investigation and discovery of the vampire threat and the full depth of what that means and the implication behind it is really well done. The personal stories carry the dystopian element, of loss and pain – the emotional impact that is so important. As the story goes on, places go dark, the vampires spread and there’s more and more destruction and loss that really gives the full tense feel of a losing battle. Abraham’s memories give us the history as well as the ancient horror of the vampire which creates far more menace than would have been possible without him.

Eph’s dealing with the plague is excellently conveyed, the confusion, the denial – and the complete refusal to accept from his colleagues. The powers that be are more worried about causing a panic than responding as they deny what should be impossible. It’s a really well put together tale with a lot of emotional impact, a lot of tension and even a strong sense of the epic as the city falls more and more into shadow.

Now for the downside, and I’m afraid it’s something of a down-plummet. The pacing of this book is awful, primarily due to a truly excessive amount of Chekhov’s junkshop going on. And this is especially true in the beginning of the book. When the airplane lands and goes silent we get to see through the eyes of a lot of people. The fire chief, a baggage handler, some people in air-traffic control - all giving us different opinions and insight in order to make things truly eerie. We get the same with the eclipse, lots of people giving us their opinion and experience of the eclipse, looking through their glasses et al. And with all these people we learn something about them, something about their lives, their personality, their history.

And absolutely none of it is relevant. At least half the people you meet in that first 25% of the book never show their faces again. They’re irrelevant. Not only was it unnecessary to use them at all – but it was beyond unnecessary to develop them and give them a back story.

Things are also overwritten with lots of extremely unnecessary detail. Eph puts on a Haz Mat suit. That’s enough. I don’t need to know exactly how this happens, I don’t need to know that these suits are layered, I don’t need to know about oxygen supplies and special body bags. It shows an immense amount of research which I applaud – but just because you’ve done the research doesn’t mean you should include it all. This kind of writing continues throughout the book, detail we don‘t need, extra information we don’t need.

After 30% the story picks up because we’re into the action zone and the story is also very different from most of what we’ve seen. It’s a new take on vampires in a world where the sexy, romantic vampire has become the norm. The story of vampire as a virus and the portrayal of it being closer to what we’ve seen in a zombie apocalypse is exciting, fresh and draws me in happily.

But, while the story mitigates the writing, the writing has the same over descriptive scenes and a new cast of unnecessary characters. I can understand including some scenes to show how normal people are dealing with the crisis, how people are dealing with loved ones coming home all vampired, how the survivors are coping – deeply personal, emotional scenes. And yes, they add depth to the world and context to the tragedy. There’s also a lot more of them than necessary. Mrs. Luss, her husband and her nanny all get a scene each, there’s the rock star, there’s Gus the gangster (who I suspect may have a role in a later book), there’s this rich guy who we keep seeing and I’m, sure he plays a very large important villain role but we don’t see it more than the fact he is a villain, there’s a man and his vampire daughter, there’s a depressed woman and her husband and 2 dogs, there’s the rat catcher, Vasily Fet who takes an age to join the main group – there’s just a lot of characters here. On their own each of them adds to the feel of the world and setting but most of them don’t add to the story – and you don’t need this much world and character setting.

Inclusion wise, the neighbours of one of the side characters are possibly lesbian. One of them says one line about the eclipse (yes, this is the extent of the GBLT inclusion in New York City). We have some POC in side roles but not nearly as much as demographics would suggest. We have three POC characters, tow of which are both in marginal “scene setting” roles, being Gus and Neeva (though I think Gus will be more important in the next book). They’re both also really stereotypical, Neeva is a Black Haitian immigrant, a nanny, who saves her employers children (and even mother’s her employer) and she’s very superstitious. Gus is a Latino gang member and a thief. We do see enough about them for them to be human – Gus’s concern for his mother is powerful and deep – but they’re still pretty stereotyped. The third is Eph’s assistant whose character is so important that I can’t even remember her name. Nora, Nora Martinez – yes I looked it up

In general I liked the story. I liked the concept, the world setting is rather different from what we normally expect – it’s original and interesting and even exciting and fun. It maintains a lot of tension and there’s a lot of highly charged emotional scenes which really bring out the full scale of this budding local dystopia. On story, characterisation and world alone I’d probably give this book 3.5 fangs or even 4. But I can’t get past the writing. It is poorly paced, the writing is waffly and it’s full of side plots and side characters that are irrelevant. Worst of all, I nearly DNFed this book before I got a third of the way in – it starts awfully slowly.

I would say read this book, it’s a great twist, it’s worth the time to read it. But you are going to have to work at it and you’re going to have to push through that beginning. It’s a shame really, because the story is extremely good and original but it’s slow, so very slow.

I’m hopeful for the next book – many of the side characters are removed in various ways and the ones that remain look integral to the story. So, hopefully, the problems with this book won’t translate to the next one.
Posted by Sparky at 3:00 PM