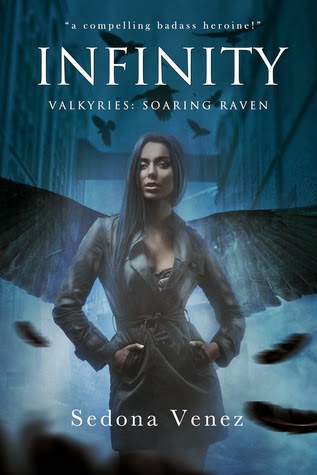 Infinity is a singer, a super star, rich and influential – and burned out. After getting hooked badly on the cure-all-pills Rejuvenators and a very public break down, she’s pulling herself back into the limelight with  grand concert – a concert that is aimed at bringing down the predatory Collective Corporation that exploits people with its pills

A collective run by vampires, who are not happy. But that is the tip of the iceberg. Unknown to Infinity, she is the keystone in the master plans of many supernatural factions and she’s suddenly very much on their radar;

This book comes with a lot of potential.

We have a world with vampires controlling a vast pharmaceutical empire with deeply nefarious goals. We have complicated issues of class and exploitation. We have a hyper-rich, powerful singer both enjoying vast wealth but also being discounted for her attempts of philanthrophy. We have not just numerous supernatural beings, but each of these groups is split into factions with a myriad of goals – all of which with crafty cover stories for the greater human society. Underneath it all we have strong hints of dark powers and a central protagonist pulling herself out of addiction and with great big powers and secrets to be revealed

It has immense potential. Immortals and gods and vampires and wereanimals and Valkyries and ravens and big corporations and magic and so much more. Immense potential indeed

People who have read a lot of my reviews will realise that when I start a review talking about potential, I’m going to now say how it completely failed to deliver that potential

And oh, yes did this book fail to reach that

First of all, there’s our introduction to the supernatural elements of the show. Or lack thereof, because the main character we follow, Infinity, is rather indifferent about the whole thing. She has scary prophetic dreams with being that call themselves various wonderful things and she doesn’t do anything about them. Her mother tells her that werewolves and vampires exist…. And she has no follow up questions. Really, it’s like “VAMPIRES ARE REAL!” “Really?! Hey, it’s really cold, let’s go inside.”

I am less than impressed with her reaction to the supernatural – and the fact we’re following a protagonist who shows little interest in and has little involvement with the supernatural factions driving this world we never really delve into much of anything. Worse, her indifference doesn’t man everyone is indifferent to her – she is involved in all of this plotting as an object to be obtained

Because we do get some viewpoints from the various supernatural elements in the world – wereanimals, vampires et al and it’s clear they’re involved in some very heavy politics and competition with multiple factions on every side plotting to do various nefarious things – all of which tends to involve one element. Infinity

Or the weretiger whose family is finally making a play for power while occupying a complicated and privileged position in the supernatural world that promises for lots of complicated politics. Maybe. Of course their plan involves their guy having sex with Infinity.

Or there’s the rock star who is… actually, he’s a complete and utter nobody but he’s dropped in because there weren’t nearly enough men in this book who wanted to have sex with Infinity. Apparently.

About the only ones who don’t want to have sex with Infinity are actual relatives who want to protect/preserve/use her for nefarious schemes that are just not all that clear which just goes further to making Infinity a weak, helpless pawn to be fought over by just about every other (almost entirely male) faction in the book.

Infinity herself talks a lot about how hot guys are (and how hot she is) and seems, on the surface, to be sexually empowered. But even while she and her best friend Zoe are heartily reclaiming the word “slut” and being firm that they get to appreciate hot guys and talk about sex (with her mother as well), Infinity is a virgin because woo-woo. She actually feels ill whenever she has sex. At which point we’re introduced to the concept of magically super-special mating bonds. It’s rather depressing – because this sexual, refusing-to-be-shamed woman has what amounts to a mystical chastity belt to ensure when she does finally have sex with her special mated someone, she will be an unsullied virgin to deflower.

Another frustrating element I feel I have to address is the banter. Because it is funny, the interactions between Infinity, Zoe and Diego is fun, very real and does an excellent job of presenting them as friends. But it’s really drawn out – there’s one scene where they talk before they get out of a car at a glitzy party and they must spend the best part of 20 minutes sat in the car snarking at each other without actually conveying anything to add to the story.

Which comes together with everyone’s utter obsession with having sex with Infinity and the lack of real development of the world or plot line and the fact the book ends JUST as the supernatural elements are actually becoming relevant to Infinity’s life all together wit the book’s length. At a little over 200 pages, it’s a short book – and a short book with lots of overwritten banter, lots of guys drooling over Infinity and at least 3 men who seem to be carbon copies of cocky-sexual-harassers-who-think-they’re-god’s-gift-to-women (whether this is cute or revolting seems to vary depending on whether Infinity likes them or not) and we have very little room for actual plot left.

The positive is that, now we’ve had this introduction, the next book must touch the world building and plotting to come. This book wasn’t great but I do actually have quite high hopes for the next one. I really want to see this world and storyline develop further and the next book should do that

Another major positive is the racial diversity of this book. Infinity is Black and Native American, Zoe is Black, Diego is Latino and a number of the minor characters are POC.

I think Diego MAY be bisexual – at least Zoe repeatedly refers to him as such but at the same time in other places Diego seems offended at the idea that he likes men and spends all of his time drooling over, creeping over and harassing only women (he is one of the three god’s-gift-men). Both Zoe and Infinity think it’s amusing to taunt him about liking men like the very suggestion he likes men is some kind of burn or witty come back against him. So if he is bisexual it’s a depiction that needs work

Which kind of stands for the whole book. The concepts, the multiple factions the several different, excellent machinations running side by side are excellent. I love the idea of there being so many different forces and goals and it’s not a simple good vs evil. I love the size and complexity of this world and the apparent diversity of opinion between the characters we’re clearly meant to be rooting for

But I need to see more of this – more of this, less of Infinity being an object to capture, a prize to claim and more of her being included as more than the end goal in someone else’s scheme which I hope we will see in the next book