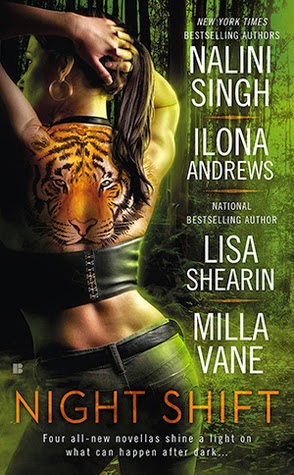 Secrets at Midnight by Nalini Singh

This is a classic romance from the Psy/Changeling world of Nalini Singh. Which has both good and bad points. On the good side we have a lot of racial diversity, the fascinating world playing a backdrop, some pretty awesome side characters and a romance that was generally very sweet

On the minus side, it was so classic that it was faintly predictable. Bastien meets Kirby and ZOMG SHE SMELLS OF WIFEY! And lo, the romance is now written in stone as soon as he human brain catches up with Bastien’s relationship planning wereleopard nose. To be fair to the story, while Bastien is very eager to be with Kirby (because of the WIFEY SMELL!) he is also very careful not to pressure her – even refusing to have sex with her when she instigates it because he recognises what vast changes have suddenly rocked her life and he’s very conscious about not taking advantage of her. He is very respectful of her agency and, if you must have the “I smell true love with this complete stranger we are destined to be together” storyline then this is one of the best you will read out there. I’m still not a fan, but this was one of the best I’d read. Especially since, while Bastien had all the classic “MAH WIFEY!” possessiveness, he also kept that to the internal monologue.

There’s also some clear story beyond the “I SMELL WIFEY TWU LUB!” storyline with nice appearances from Bastien’s family and Kirby’s past.

It’s Jim and Dali’s story! For a long time fan of this world, this is perfect and I couldn’t wait. But beyond my love of these two characters, this story is awesome as well because of how Dali grows in it. Jim has always been confident, powerful and a leader of his people; he’s the chief enforcer and security head of the Pack, he’s the head of Clan Cat, made up of some of the most dangerous and powerful and independent of the shapeshifters. He has always, from the very beginning of the book, been an immense power and worthy of respect. Dali, on the other hand, has always been plagued by insecurities which is clear here – she considers herself scrawny, she has very poor eyesight, she’s a vegetarian, she’s not dangerous and generally considers herself inept – and has no idea why Jim wants to be with her. Her lack of self-worth is painful to see

But through this book Dali really shows off her own strength – and not through Jim holding her hand and convincing her she’s special (though he is instrumental in pointing out that it doesn’t matter how limited her vision or averse to blood she is, she’s still a massive White Tiger and the biggest werecat in the city not to mention absolutely awe inspiring in appearance), but through her going through her life as someone who defeats evil magic in her Indonesian community. We see a side to her life we’ve never seen before – which Jim has never seen before – in which she is casually competent and incredibly, awesomely powerful – and Jim is willing to support her in that, play second to her and let her guide the action because this is her territory and her expertise. We get to see Dali in all her amazing glory and the immensely powerful Jim continues to show his strength AND isn’t lessened by allowing Dali to take point.

Throw in Dali being Indonesian, Jim being Black and a whole lot of racially diverse side cast and this was awesome all through. There’s also a wonderful sense of Indonesian culture – I can’t say I’m an expert but there was some clear research involved from cuisine, to mythology. There’s also some definite sharp commentary on the habit of fetishising Asian women. And Dali’s family is hilarious.

I don’t know if it’s because I am not familiar with this world – but this felt like a lot was packed into a small space. On the plus side, that lot was wonderfully zany and excellent whacky fun and I’d definitely want to pick up the whole series attached to it – but it definitely felt like a small part of a whole rather than a story that could stand on its own. But, then, since it left me wanting to find the rest of that whole, then I think that’s a definite result.

The world is incredibly diverse with a lot of interesting political machinations between the different mystical factions which just makes me want to delve through it all. I also like the snarky mundanity brought in – like the supernatural loving our world because of indoor plumbing. Makenna is an interesting character – she has a useful ability without being superwoman, she seems pretty alert and fun and capable and generally will be a decent protagonist to follow around and definitely one I’d like to see more of – she also has a sense of needing employment, but not seeming to be drowning in devotional loyalty to an employer because of that – which will be interesting to see develop. There is a budding romance but thankfully they resist the urge to pursue it. Some of the humour about the male leprechauns shifting into female strippers to humiliate male agents borders on the transphobic and homophobic, though

The Beast of Blackmoor by Milla Vane

Why is this story even here? There’s a Grimdark High Fantasy story clinging to the end of an Urban Fantasy anthology? It feels so very out of place compared to the other three stories in the book

And why, when going for a Grimdark setting, do we really need to have wall-to-wall rape? A tyrannical dictator enslaving his populace who are starving because of demonic tainted water is already pretty grim, we don’t need the man who was raped in the stocks and the hero who was gang raped as a teenager and the king who wants to enslave him for more rape in the future to extra grimmify everything. Nor do we really need all the angry sex between Kavik and Mala, the woman he thinks is going to enslave him and return him to a life of being raped. I equally dislike that Kavik and Mala saw each other and it’s twu lub forever, each of them willing to sacrifice everything for the other. Which sounds kind of romantic – until you remember that they’re both heirs to separate thrones on which much of the hope of their people’s rest.

Once we move past the rape and the fastforward romance, we actually have a great story and world here. The pantheon seems rich and researched, the world is so well described you can almost see the landscape. The politics has layers and has clearly been well put together and I’m sure all of these lands have a lot of research in the author’s notes and head. The action scenes are gloriously written and I can see the chainmail and the flying blood. The story has all the epic fantasy elements and if I were ever to get back into high fantasy I would have considered this author and this series because it ticks a lot of boxes – but not the pointless grimdark rape or the falling in love while still reeking of the entrails of the monsters they just slew.

It’s an anthology with a lot more ups than down, a lot of excellent stories, some brilliant characters and, in at least 2 of the stories, some good racial diversity and development. The first two stories are the strongest but all of them have strong elements in their favour.