The Last Man on Earth, Season 1, Episode 1: Alive in Tucson & Episode 2: The Elephant in the Room 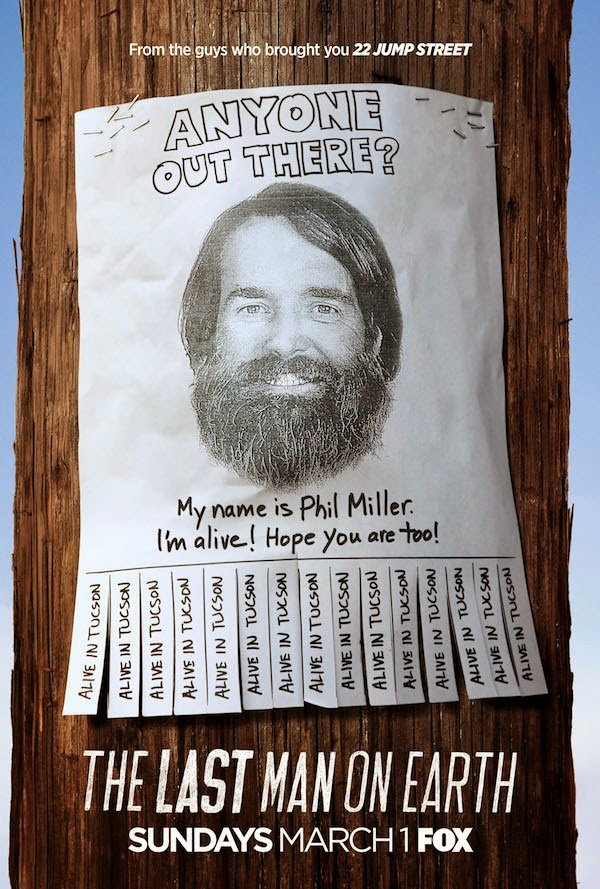 Our protagonist, Phil, drives around in a bus with a megaphone on it, crossing through state to state trying to find another human being. He doesn’t have much luck, crossing off all 50 states.

He decides to enter Tucson and paint the signs to say there’s a living person there. Hey, if everyone’s dead from the virus at least there’s a considerable lack of corpses!

Time to set up home – of course the most expensive one around, who wouldn’t? Which he then redecorates with all the National Treasures he’s looted from across the country (again, who wouldn’t?)

He reflects on his situation through prayer and that inevitably turns to begging god for a woman.

And gets weirdly fixated on a female mannekin. We get it, he’s desperate for sex.

More antics until his sad and lonely birthday and sad memories. And more ranting about god for being alone.

His continued antics have reduced the entire house, and its treasures, to a rubbish dump. Those antics involve more and more booze. I don’t even want to think of his toilet arrangements

He continues to be obsessed with women. And contrary to his ranting at the TV he is reduced to talking to balls with faces painted on them. More obsessing about women, kissing a manikin and more booze.

He finally contemplates suicide by ramming his truck into a boulder but stops just before impact – because he sees smoke.

He hurries there and finds a camp site and, far more meaningful to him, women’s underwear. He faints when he hears a woman cough when she catches him fondling her underwear.

He wakes and they’re both overjoyed to see another human being; well in his dream anyway. When he actually wakes up the woman is less perfectly made up and she thought he was dying (and wetting himself). It’s a lot less dreamy. And when he gets close to her she, wisely, points a gun at him and, for some reason, critiques his grammar.

Eventually she puts her gun away and introduces herself as Carol, last woman on Earth.

Episode 2 The Elephant in the Room

Awkward conversation, Carol’s annoying habit of correcting grammar badly and Phil realising being all alone may actually be preferable. She also would rather he follow traffic laws – like stop signs. Honestly, last person on Earth looks preferable now.

Which involves cleaning (just move into a different house), shopping and following rules like disabled parking which don’t really apply when there’s no other humans around.  They continue to annoy each other until she moves in next door

And brings up the elephant in the room – repopulating the planet. Both make it clear that they would really really really rather not; but she’s determined to fix him until it becomes tolerable. She tries to seduce him with fresh vegetables to encourage him to help.

He steals tomatoes instead and, given the paucity of suspects and his tomato stained clothes, is obviously the culprit. She calls him a terrorist. She continues to ineffectually try and obtain running water.

After a long time trying Carol seems to give up and become as much as a slob as Phil having realised she’s pretty ineffective.

Guilt makes Phil try to get running water instead (he’s not much more effective) but he does succeed in getting water to Carol’s tomato patch. Reconciliation is in the air and he is utterly graceless about it. Oh but she also wants to get married before they have sex.

I’m not going to poke at how neat and clean everything is for a world destroyed by a virus because this clearly isn’t the kind of show that expects you to look to closely nor does it care if you find the holes. The setting is a backdrop for shenangians, to poke it would be like going to the theatre and complaining that the buildings in the background aren’t real.

But I can’t say I’m a fan of the foreground. Does this make people laugh? Guy breaks stuff and obsesses about women… ok… and… funny? Ok the bowling balls and the fishtanks amused me. But that’s about it. Honestly I didn’t crack a smile the whole time.

And I can’t say I can even think “hey I’d do that”, maybe collect the art but randomly break stuff because? I don’t see the appeal.

Followed up with the slob-man-nagging-woman mind numbingly dull and repeated trope – this one dystopian style and taken to the umpteenth degree, and I’m not a fan.

I’m going to have to say this whole show is about as appealing to me as root canal surgery without anaesthetic and with very shaky hands-  but I rather think I’m not remotely the target audience.