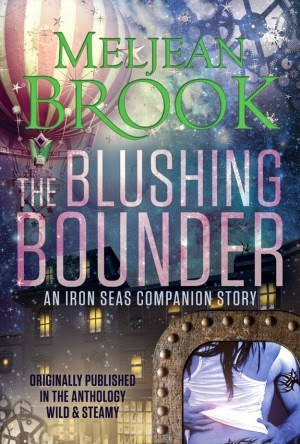 Constable Edward Newberry has been a character in the series before – this is the story of how he first came to England, and the conflict between him and his new wife, Temperance.

I love so much about this short story and it’s amazing ability to pack so much into such a short space. And that includes the world setting which, as I have rhapsodised about before at great length and with fawning praise, is amazing and wonderful and wide and rich and complex.

Ok, I do think it helps that I know this world setting so, perhaps, I can read a lot more into the hints and suggestions than someone completely unfamiliar with the series. But still, I think you could read it cold - and it’s worth reading many of the books in the series anyway

In a short space this book covers a lot – the cultural differences between the Bounders (British aristocracy who fled England ahead of the Horde invasion now returning after the liberation) with their Victorian prudishness and ideas of propriety (and excessively over the top sense of the horrors that they left in their wake) and the people of Britain who remained under the horde – and in doing lost a lot of their inhibitions but, with it, a lot of their emotional control as they’re finally free from the Horde’s mind control

We see Mina being the awesome detective she is, brilliant and demanding brilliance from others, refusing to waste her precious time on foolishness and constantly testing those around her to make sure they reach her lofty standards. But at the same time having to deal – with weary resignation – with the prejudice and hatred of most of the populace who see her Asian face and assume she is a member of the Horde.

We have Edward and Teperance our main characters dealing with the culture shock of their new surroundings even as they have to re-examine their own relationship.

On top of that we have some wonderful little world building gems that makes this book essential reading for anyone reading the series – like the nature (or lack) of sickness (and doctors) in Britain or the class and economic pressures on people to force them to give themselves cybernetic enhancements.

It’s impressive just how much is here. unfortunately, there’s a downside to all this awesome

The underlying problem to this story I can’t get past, even with the wonderfulness that is Mina and the evident power of the love between Edward and Temperance is the complete lack of respect for Temperance‘s agency and an ending that just doubles down on that by upholding him as having made the right choice.

Regardless of Edward‘s motives for his actions, regardless of how well meaning they were and how much he loves her. In fact, I would go further and say that it would be more forgivable for him to claim he kissed Temperance without consent because he was in love, not thinking and generally being a fool. Not that that would be a good thing by any stretch. Instead we are presented with a scenario where he planned everything – kissing her, marrying her, moving her to a different continent all without her consent. Yes it’s for her “own good” but that’s irrelevant – in fact, it exacerbates things because it presents her as someone who needs looking after and decisions made for her. It’s sad because this unforgiveable scar on this short story really ruins something that is otherwise wonderful and sweet