Poisoned by Deceit (The One Rises #4) by Anna Wolfe 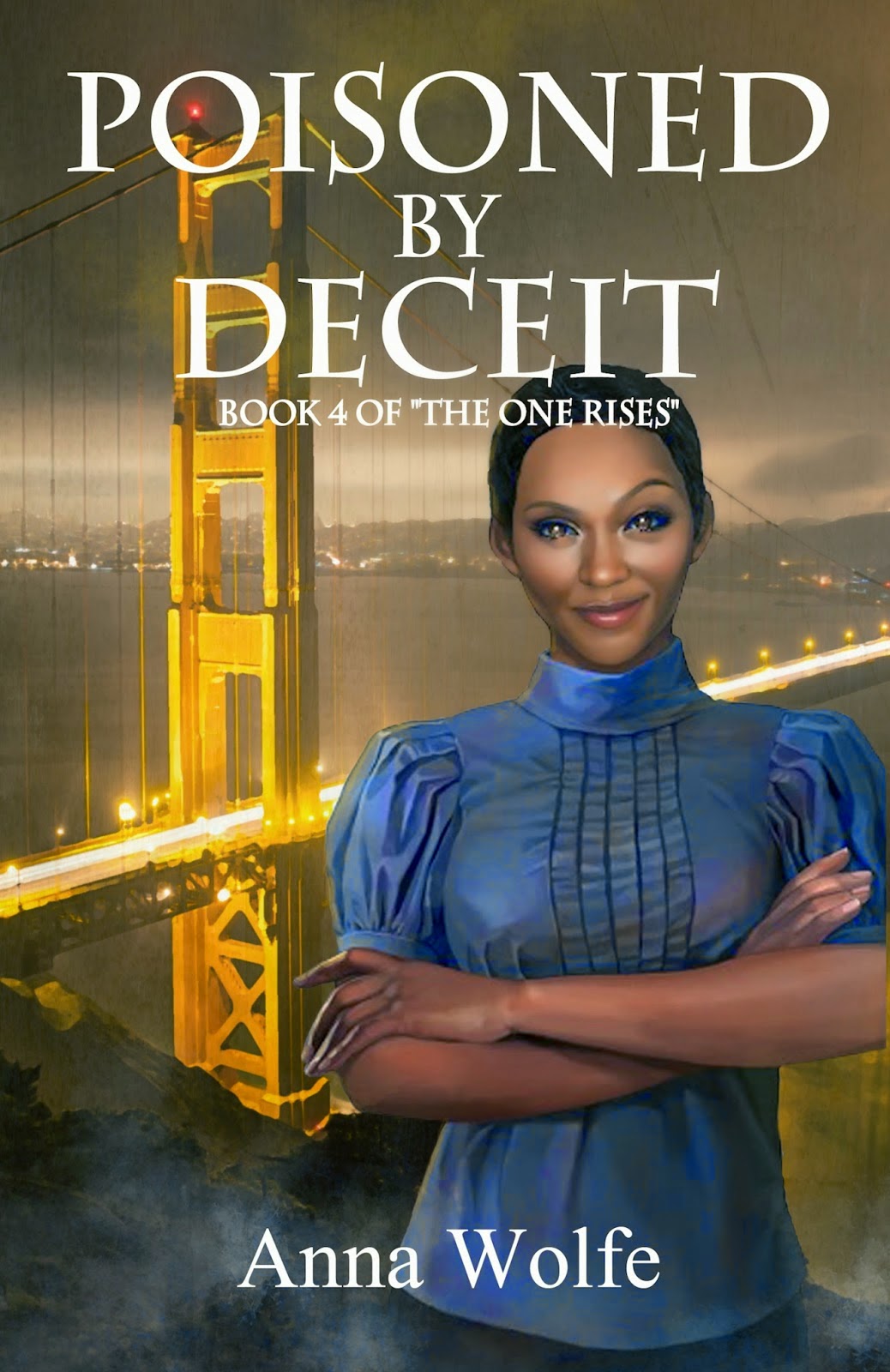 Silas receives a message – a summons even – from the witches of San Francisco demanding his help. Witches are going missing, young witches, and one of them is very close to Edie’s ex-husband and ex-mother-in-law.

As they head to San Francisco they have to uncover a plot that risks the Covenant and save young lives before they get in too deep. But just as frightening, Edie has to confront the shadows of her past, people she hurt long ago and an extremely powerful witch who has every reason to hate her.

As is common with this series, this book is far more about the characters than the story. The book is split into multiple point of view sections – Edie, Mark, Silas and Callie and, again, it does it really well. I know I’ve said it every book, but I don’t think I should stop praising it just because I expect it – it really does work. Usually this would be jarring but seeing it from several viewpoints really helps see every character to their fullest. Without this insight into everyone’s head, Edie would seem quite emotionless and cold, Silas would seem uncaring and distant, Callie withdrawn and impulsive and Mark just an arsehole. Because we see inside their heads we see far more of the motives behind each character and it makes for both excellent development and complexity – especially when two characters are at odds and you can see both sides have a point.

One good example of this is the trust issues that permeate this book. Because of various woo-woo Silas has secrets that he simply cannot share with the others. Not doesn’t want to, but absolutely cannot. But at the same time the very nature of his training means he requires complete and unflinching trust from the others, without a shred of thought for privacy. This makes for some excellent development and conflict as Callie repeatedly holds back and even Edie has reservations, tempered by her much longer association with Silas.

There’s a lot of complexities and motives among the group with no-one really wrong because everyone has a point and a good reason for thinking what they think and doing what they do.

This book and series continues to be a wonderful subversion of many annoying elements of Urban Fantasy – especially in relation to feeding and control. The bitten in this world hunger, they need to feed. What they feed on differs from bitten to bitten, but common examples are pain, sex, fear, blood, anger – even devotion. Usually if they can feed on it, they have powers relating to it – and a hunger or drive towards causing it

In any other Urban Fantasy, this would be the cue for lots and lots of sexy times as the sex hunger-ers had lots and lots of sex with very little consent and excused it all with woo-woo, lots of guilt or guilt and woo-woo. They may occasionally complain about it, but generally a wonderful time is had by all

That isn’t the case here. Firstly, the hungers are a constant burden on the bitten. That doesn’t mean they angst constantly about it – but that they always have to fight it, they resign themselves to having to feed it. It’s viewed as a tiresome chore to have to feed, something that gets in the way of normal relationships and something that is quite violating and unpleasant. It doesn’t mean the sex is bad, per se, but the fact they’re doing this because they have to and even that they don’t feel particularly attracted to the people they’re having sex with is very clear. This is nicely contrasted with Edie’s actual, genuine relationship showing attraction, lust and affection. Just by showing her genuine emotion and enthusiasm it exposes the hollowness of having to feed their demonic hungers.


And when someone does lose control of their hunger or of their powers, it isn’t seen as something to mope and angst about, it’s seen as a failing. They don’t think “oh pity me” they’re frowned upon for not having better control – even of things like Mark using his powers to see what would make someone angry and unable to resist the urge to say it so he can feed on their rage. They’re bitten, they’re dangerous and they have a duty to control that danger. Failing is just that, a failure to be judged and chided not to be pitied and babied. It’s a nice switch from the usual angsty, woe-is-me depiction we usually have in the genre to a base expectation of taking responsibility for who and what you are.

That’s not to say there isn’t still the chance for redemption and addressing past mistakes- as Edie’s storyline excellently shows with her confronting her ex-husband’s family- but it takes more than guilt. There’s also some nice ongoing character conflict with Edie’s extreme discomfort with her infatuation power while it being the only thing Hatter/Luis can rely on to remain lucid should he ever want to reconnect with his family. What do you do when the only lifeline you can offer someone is a chain?

These characters are all wonderfully set off by this amazing world. A world where the Covenant tries to hold the various factions together even while they loathe each other. Demonridden, witches, Bitten all plot against each other with even the Bitten factioned into those enforcing the Covenant and the Chosen who want to bring down the Demonridden for their own power. There are rogues working several sides, some hidden creatures lurking at the edges, some witch seers following their own bewildering path guided only by their visions of the future and under it all the threat of the One. An ancient demonridden that everyone fears that is looming in the meta-plot. It’s not even the different beings and entities that make the world building, it’s the detail and description of each element that make it so real and powerful. The demons, their history, their individual powers and traits are all carefully crafted which I really appreciate

The story itself isn’t particularly anything special – a rather simple missing persons investigation. But I don’t think it’s meant to be. The story is there to help us tell the personal story of the different characters with each book giving a character a focus (but keeping them all going. The last book focused on Mark, the books before were more about Callie and this book is, if anything, more about Edie. There’s a plot as well and it does an excellent job of letting the characters show themselves and establishing the ever looming but slow burning meta-plot, but the characters are what rules this.

We have a large number of POC – Edie is Black and one of the co-protagonists. Her lover, Dyshawn doesn’t appear much but is very present in Edie’s mind and is also Black. As is Ephraim her ex-husband and his mother, Makeda, a powerful witch (but in no way is woo-woo tied to race or ethnicity) and an influential force in the story and part of the plot is to rescue a relative of hers. There are some cultural markers and some careful call outs of racial assumptions without any gross stereotyping, They have Luis/Hatter is Latino and slowly becoming more prevalent in the story. They spend time in a half-way house the Bitten maintain that helps raise young Bitten, one Black with interesting powers similar to Mark and the other Latino from Brazil.  Silas himself is of indeterminate ethnicity as it is said repeatedly from other points of view, but from his I think we’re looking at Middle Eastern of some form, though it’s still unclear so I’d be leery about putting him in the inclusion column. There’s also a number of other POC from the various factions playing different but minor roles. It’s a fair few characters of colour, all told and none stand out as being cringe-worthy and many are vital to the storyline.

There’s one gay man and his more referred to than appearing partner, but he appears very briefly at the beginning of the book for reasons that are still left vague, is kidnapped and then disappears until the very end of the book. There’s no offensive tropes about him, but then he’s not present long enough for there to be any.

This series continues to draw me in. I love these characters, I love their story and I and genuinely curious about what will happen to them next. I actually feel far more connected to the characters than the meta-plot; their stories could end up very mundane or episodic without any grand arches and I think I would still be equally invested. I like these characters, I want to see what they become and what the world makes of them which almost guarantees I’ll be invested to the end.