All Hallows' Moon (Seasons of the Moon #2) by SM Reine 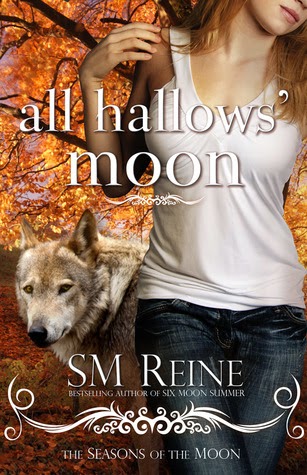 Rylie, a new werewolf, has to get out of the city. She’s too dangerous to be around people, there are too many things around her that distract her wolf senses. While she may not like the countryside, life on her aunt’s ranch may be the one way she can avoid hurting people

But, with werewolves now very rare, the werewolf hunters are quick to identify what the animal attacks on livestock around Rylie mean. Obsessed werewolf hunter Eleanor heads to town with her two sons, Abel and Seth

It really sells Rylie as a teenager who is turning into a werewolf, not understanding and desperately hoping that she won’t hurt anyone but not knowing how not to. She flees the city because the idea of changing into a wolf surrounded by so many people terrifies her – as well as her senses being completely overwhelmed. So even though she chose to move to her aunt’s ranch in the middle of nowhere, it was still a choice that was forced on her and she is a city girl at heart. She’s also mourning her recently deceased father and all the traumatic events that happened at camp

Does this make Rylie a happy, sunshine, reasonable person? Nope. But I don’t think anyone could be or would be in those circumstances.

Similarly, Seth is clearly disillusioned with his life as a hunter. He is severely questioning the morality of their path and, even aside from that, simply doesn’t wasn’t to live this way; a life with no affection or love, a life where family means fellow warriors, a life where his mother cares more about the kill than her children and a life which, ultimately, has no future. Rylie is an excellent catalyst to accelerating his own discomfort and challenges with the lifestyle his mother demands. And I like that it is an extra element that spurs him but not the only reason, he’s not turning his back on his family and tradition and duty he believes in because of Rylie – he’d already seen the deep flaws in all of them long before.

I really like Rylie’s aunt. She doesn’t play a huge role but is definitely present throughout, only behind Seth, Adam and Rylie herself. She’s a lesbian who touches ion a few stereotypes but they’re matched well with her character rather than taking to extremes or included because they are stereotypes. She’s supportive and confused, she’s trying to help Rylie and doing the best she can despite Rylie’s many problems, and her own problems at that (both money and health). She knows Rylie’s been through a lot and is trying to be patient and trying to help her. But she doesn’t know how and is somewhat flailing

I’m also glad for Rylie’s aunt because it means we have a woman who isn’t terribad awful. Yes, like the last book, Rylie continues to have major issues with other women. She starts a new school and a nice girl tries to be friendly – and Rylie turns to boiling acid of loathing. We also have Seth and Adam’s mother who looked at Rylie’s mother and declares “you think YOU’RE the worst mother in the world? Oh no, I’m going for gold!” Even Disney would think this was a terrible depiction of motherhood (Seth and Adam, like Rylie, have a conveniently dead and fondly remembered father). There’s also a teacher who singles out Rylie as a trouble maker after very little and is then watching her with deeply negative eyes.

Naturally, Rylie does make friends… with a guy.

Seth and Abel are both POC and some of the most major characters on this book (the most major after Rylie). Neither are stereotyped but nor are there a great deal of indicators of race in their storylines.

There could be some attempt to explain this as trauma from the meangirls at camp – but people, were eaten by WEREWOLVES and mean girls are the trauma? And even then the whole ridiculous caricature of the mean girls was a problem to begin with – to say nothing of the fact that Rylie loathed all things female even before the whole summer camp thing.

Again, I won’t say the plot is particularly complicated or original: it’s classic star crossed lovers with a dash of werewolves and Rylie having a rather more violent than most coming of age story. But it’s an excellent story in which both Rylie and Seth can grow. The focus is on them, what they go through, what they learn, the decisions they make when confronted with their situation. I think that this points to SM Reine having really planned her many many series and recognised what an integral figure Rylie would become – so we have her growth here, a series that follows her journey into becoming the force she will one day be. That’s a pretty awesome use for a series, and it is done well through that lens. The story is good, but not overly complicated and cluttered. While there is an introduction to some of the wider world elements like the kopides, it isn’t too much or addressed in any great detail.

So, in terms of a book I enjoyed or even a series, it doesn’t rate very highly. But as part of the overall world that these series are set in, I think it is a very useful book that does a lot to develop one of the integral characters within it.