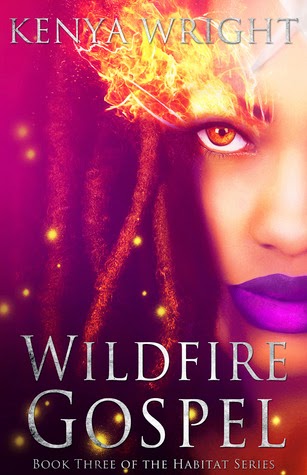 Lanore is done. Zulu is done. They have lost enough. They have suffered enough. Too many people have died. Now people are going to burn.

Despite the rampaging warpath and Zulu’s insistence on doing things “his way” (which involves a lot of bodies and Lanore is done trying to stop him), politics still intrudes even as the corpses pile high. Dante and his vampires, while very much deserving of being burned, have some very tempting offers to make. If Lanore can resist burning him

Of course, she could find other allies – but there are so many factions, none of which trust each other and Lanore doesn’t know if she can rely on any of them.

Meanwhile MeShack is going through a stunning transformation – and learning more about demons than ever he expected to.

I think the balance of this book with its world building and multiple factions is really excellent. I have always loved the underlying setting of this series because it is so original. The concept of the Habitats with the captured supernaturals inside after losing their war against humanity is unlike anything I’ve seen before. It creates a setting that is not just unique but is always relevant to the story – we can’t forget the basic setting because it defines the entire story

It also creates a setting with no humans at all which is definitely an interesting twist as the different species exist with their own powers and cultures and rivalries which are often complex and intersect a lot with some brilliant class analysis and the depiction of the mix-breed supernaturals (often, but not always, less magically powerful and always disenfranchised). Again, the setting is always present in these depictions – like the various supernaturals who hate the vampires because they refused to fight in the war against humans (while the vampires insist it was pointless to fight a war they couldn’t win).

This also underpins a lot of the motivations of the characters which really drives the story. The twisty politics of this story as Lanore and Zulu have become major and renowned players is huge – we have multiple factions all vying for their attention (or servitude) and pretty much all of them are conniving and have their own agenda – all gazillion of them. Lanore doesn’t trust any of them, not one tiny iota. So why does she work with them – well politics is a main element but the underlying pressure is freedom

She hates Botelli vampire family and doesn’t particularly like vampires in general – but they’re working to free them from the Habitat. That’s worth it. Similarly others give her the chance to visit other Habitats – which, in itself, is presented as such a miraculous thing. The impact of this, the whole driving point of the storyline all works because of the foundation of their imprisonment. Even while so much of this story is characterised by Lanore finally snapping over how many of her friends have been lost and endangered and is quite willing to see Zulu pile bodies high – and add her own piles of ash – they still work with these forces because of that desperate wish for freedom. It’s this amazing metaforce behind everything else, behind all the personal stories and the revenge and the love, there’s always that pressure to be free that truly affects every decision

I also love how the different insular Habitats have been handled – like they live in Santeria (since every Habitat is based on a religion) which means the Santeria religion has a lot of influence and inclusion – but at the same time the inhabitants know little about not just the other Habitats, but also the religions they’re named after – like Meshack not having a clue that Christianity is monotheistic. Equally how each Habitat operates is based not just on the supernatural and religion, but also the politics and the laws of the country it’s in – it’s these details that make the world so rich, because each there is so much history and difference there

Graham and MeShack’s story also allows us a lot more personal history with him and Lanore which I like as well as further expanding the awesome world building and a lot of personal character backgrounds.

There’s a huge number of POC in this book, both from the Santeria and the Shinto Habitats, with Lanore, Meshack, Graham and several other major characters being POC as well. There’s also some really nice considerations of how race affected Graham’s history and his demonic ways which I appreciated; there’s a definite push to include plenty of cultural markers and to fully depict the POC as more than just a one off description that really shines though. And, of course, Santeria is full of depictions of Santeria (and Yoruba-origin) religions which is very rarely seen in fiction

Lanore is an excellent character who balances a lot of reason even when she’s in “kill all the things!” mode and I have a lot of praise for the way she handles the romance which is something I’ll get to. But she also has strong friends – Vee is awesome, powerful a good friend but also willing to call out Lanore when she’s wrong. Angel, similarly, is willing to check her friend as well as clearly laying the foundations for her own story. The Vampires themselves are matriarchal and the head of the Shinto Habitat is a woman.

There was some bizarre obsession with breast milk in this book that I can’t even begin to understand. I also don’t think the whole sexual nature of demon fire was necessary. Sadly, there were no LGBT characters in this book (well non depicted- I think some of them may have been presented very briefly as being possibly lesbian or bisexual in a past book but there’s nothing here)

Unfortunately, I would kill the romance (both of them) in this book with lots and lots of fire most of the time. Both Zulu and MeShack are classic alpha-male love interests who express their love with a whole lot of possessiveness and vast amounts of jealousy. This goes right up to not just threatening anyone who encroaches on “their woman” – especially each other – but even outright murder attempts. On top of that we have magical “marking” of Lanore to make sure she is well and truly labelled and claimed and a whole lot of orders, demands, expectation and general ownership bullshit. It’s tiresome and I’d have singed both of them long ago if I were her.

The one saving grace to these romances which do nothing for me is Lanore herself. She does put up with way way way way way more of their bullshit than I ever would, but when she meets her limits she draws lines. She dumped MeShack for cheating on her, even when she’s recovering from believing he’s dead she refuses to let him press the boundaries of their relationship. Every time Zulu gives her an order she is quick to mock him cruelly at the ridiculous idea that she will actually do what he says. And when Zulu crosses a major line, even with his excuses, Lanore puts her foot down and is most certainly done. Maybe he can pull it back in later books – but not now. Lanore makes it all much easier to swallow because she refuses to go along with it.

It’s an excellent continuation of this series, this amazing world and these characters as their stories just gets larger and more powerful and more epic.