Game of Thrones, Season 5, Episode 4: Sons of the Harpy 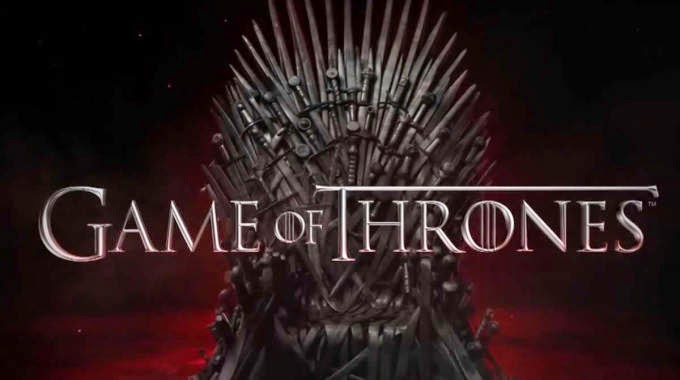 
Jorah continues his kidnapping of Tyrion, loading him onto a boat. He manages to be loud and annoying even while gagged. Which gets him ungagged which pretty much gives advantage to Tyrion. If he can talk he can win. Jorah reveals he’s taking Tyrion to Daenerys which he finds hilarious (and a waste of a good kidnapping). Tyrion realises who Jorah is and rightly guesses everything that happened -Jorah being revealed as a spy and now trying to trade his way back into Daenerys’s good graces


Unable to duel words with Tyrion, Jorah hits him instead.


Also on a boat, heading to Dorne, is Jaime Lannister and Bronn (sailing past Tarth where Brienne is from so Jaime can have a brief, poignant look), on a merchant vessel to hide who they are. Bronn has pretty stark impressions of what the Dornish are up to as well as how little fun it will be to kidnap a princess (and a pointed silence when Jaime refers to Mycella as his niece). Bronn pokes at various sore points - like Jaime letting Tyrion go free which Jaime is pretty sore about, he may have wanted to rescue Tyrion but now he wants to kill him for killing their dad.


Lannister family reunions must be such fun (and that’s not even an incest jab. Or not entirely anyway).


They arrive in Dorne and have one of those wonderful little character conversations that Game of Thrones can be so good at - Bronn talking about glorious death with a good story (something he considers a luxury for rich lords like the Lannisters) and his own dream of a nice quiet death after a life of prosperity (something Jaime considers boring - because prosperity is just assumed for him). A very nice comment on legacy, excitement, adventure and prosperity across the class divide. Jamie wants to die in the arms of the woman he loves - oh he’s pining (and note a lack of definition of who that woman is).


Bronn is also wonderfully snarky at the idea that Jamie can bribe people to be silent about his presence - and they end up having to fight four Dornish soldiers. Bronn takes three, leaving Jaime trying to fight with one hand against one - but it’s his metal hand that saves him. Of course now they have to dig graves - and Jaime points out he can’t really dig with one hand.


Elsewhere in Dorne, Ellaria meets with some of the Sand Snakes, Oberyn’s daughters: Nymeria, Obarra and Tyene. Ellaria wants to provoke a war between Dorne and the Lannisters to avenge Oberyn and since Doran refuses to go to war, the only way they can do that is to provoke Cersei using Mycella. Since they have the ship captain who brought Jaime (buried in sand and scorpions) they need to get to her before Jaime does. Ellaria asks if they’ll join her and, after Obarra’s nifty speech about her dad and stabbing the ship captain, it’s clear they’re all in favour of war.


Cersei leads the council as they get some bad news - the Iron Bank has called to collect a 10th of their debt. Unfortunately, given the state of the kingdoms’ finances, they can’t afford it - not even half of it. The Master of Coin, the rather inept Lord Mace suggests that his House, House Tyrell, could lend the crown the gold. Also rather ineptly referring to the influence his House has through Margaery. Cersei would probably rather sell her own internal organs than be further indebted to House Tyrell (going back to earlier seasons, Lannister lending to King Robert was also a major source of influence).


Instead she wants to send Mace to the Iron Bank to negotiate - with Ser Meryn of the kingsguard as a bodyguard. Mace, being a damn fool, is wonderfully flattered by this.
Pycelle notes the small council grows smaller. Cersei replies with “not small enough.” Which is ominous.


Cersei goes on to play host to the High Sparrow who is all humble and kind and unassuming. She suggests setting up the “faith militant”, basically an army in the hands of the Septs, under the High Sparrow. The idea being that they will dispense justice for all, protect the poor and punish the guilty no matter how highly placed. She speaks ominously of sinners in high places.


The Sparrows continue to be militaristic and puritanical - destroying casks of ale in the street, destroying merchant stalls, raiding brothels and attacking patron and prostitute alike - and special torture for a gay man and prostitute. They then arrest Loras.


Margeary confronts Tommen about this who is so very very clueless about everything. Tommen goes to try and protest, ineffectually, to Cersei who sends him to talk to the High Sparrow about Loras’s “perversions.”


Tommen goes to the Sparrows - and they stop him entering. His guards suggest just cutting down the sparrows, but it’s clear from the shouting common folk that the sparrows have more of the crowd’s sympathy than Tommen. Tommen backs off and goes back to the palace to explain himself to Margeary. She is very unimpressed.
She decides to contact her grandmother.


Stannis talks to his nearly-always-wrong wife “queen” Selyse who is disgusted by Jon being a bastard and blames herself for not having a son (though Stannis, notably, does not) and throws in some side contempt to their daughter, Shireen, for being scarred. Even Melisandre steps up to call out that bullshit (when Melisandre is morality checking you then you’re really in deep). Selyse leaves so Melisandre can remind Stannis that she needs him and shouldn’t leave her behind again as she did at the siege of Blackwater.


Jon gets to “enjoy” all the wonderful paperwork Sam brings him as the new Lord Commander. Including a request for men to Lord Bolton much to Jon’s disgust at asking for help from his brothers’ murderer - but Sam points out how impartial he must be and how they need men from the Warden of the North. It’s bitter, but Jon signs.


Melisandre goes to see him to ask him to ride south to help Stannis conquer Winterfell. He refuses and she strips off. Of course she does, the Red Priestesses must be the first religious group with tear-away robes. She encourages him to grope her before straddling him to talk about the divine power of heterosexual sex. Jon refuses because he’s still in love with Ygritte. Melisandre then freaks him out by saying “you know nothing, Jon Snow.”


Oh Jon, there’s nothing spooky about other people thinking you know nothing. Ygritte isn’t the only one who thinks you’re a bloody fool.
Shireen goes to see her dad and it’s all sweet and awkward as he clearly loves her (while being so very very very bad at emotion) even while her mother continually, cruelly shames her. He talks about her illness and how everyone told him to get rid of his daughter and how he refused and fought for her instead.


Petyr finds Sansa in her family crypt and they talk about her dead aunt, Lyanna (while also touching on how far Petyr has risen since he was once such a minor noble) and how Rhaegar Targaryen was obsessed with Lyanna. Sansa starkly describes Rhaegar kidnapping and raping Lyanna even as Petyr tries to be more euphemistic. Petyr’s planning to go to King’s Landing since Cersei called him but he assures Sansa she won’t be with the Boltons for long. He thinks Stannis will march south, liberate Winterfell and naturally restore her place. He’s pretty sure Stannis will defeat the Boltons and, as the last surviving Stark, he will make Sansa “Wardeness of the North”


Petyr, again, shows he generally knows what is happening everywhere.


Plan B is for Sansa to “make Ramsay yours”. He thinks Sansa can outmaneuver the Boltons. He kisses her - and it’s not a paternal kiss


Barristan shares some stories with Daenerys about her brother singing to the commonfolk. But affairs of state rise again and, again, Hizdahr Zo Loraq tries to convince her to restart the fighting pits in the name of tradition to try and bring the city together. It’s one of the few things that brings everyone in the city together


While he speaks, several masked Sons of the Harpy lay a trap for and ambush a Unsullied patrols. Grey Worm is in one of the ambushes and is injured. He is only saved when Ser Barristan arrives and both of them slaughter a dozen enemies because they’re just that badass - but Ser Barristan is killed in the fighting and Grey Worm severely injured.


Cersei is now arming the septs… I say again, there is absolutely no way Cersei and the Lannisters can benefit, long term, from an armed and powerful Sept that will go after “sinners” regardless of their gold or influence. I can’t even swallow this storyline because I can’t see even a desperate Cersei not seeing how this will come back and bite her.


So Loras has generally not really appeared to any great degree in this series and has often been accompanied by homophobic “humour” - and now we have him being arrested for being gay by religious zealots who, for reasons no-one explains, especially hate gay people. I’m pretty sure this isn’t in the books - so after seasons of neglect we’re just throwing in a homophobia storyline? This is a horrendous use of the show’s only recurring, alive LGBT character and completely fail to live up to any potential as an alternate universe. Worse, there hasn’t been a great job of depicting the Sparrows as an evil force - we’ve seen them attack brothels but the only graphic violence has been against gay men and the humiliation of the High Septon (who is a hypocrite). It could even be seen as a strike against Littlefinger. At the same time we’ve seen them feed the poor and the High Sparrow act with considerable humility.


R’hllor’s priestesses seem to have two tactics - get naked or burn people. Or get naked while burning people. I start to wonder what holy relics this religion has - fiery nipple tassles? But note that while Melisandre can’t get through her daily prayers without her clothes falling to the floor and her having sex (and, of course, holy R’hollor’s vision of sex is male with female because all religions in this alternate world have to frown on gay people for reasons) but Berric Dondarrion can use R’hllor’s magic to come back from the dead without any naked holy jiggling at all.


Stannis and Shireen… d’aaaaaaaaaaaaw. A perfect depiction of a man nearly incapable of showing emotion still showing his love


Petyr thinks Sansa can outmaneuver the Boltons, which shows how far she’s come - it’s going to be interesting. And that kiss and Sansa’s comment about marriage - is that him laying claim to her or showing how her maneuvering has progressed?


I like Jaime using his metal hand to fight - it shows not only that he can learn to be a capable fighter when he only has one hand, but he there are also advantages he can learn if he adapts his style; the ongoing narrative has been how weak he is without both hands, it’s a nice counterpoint.